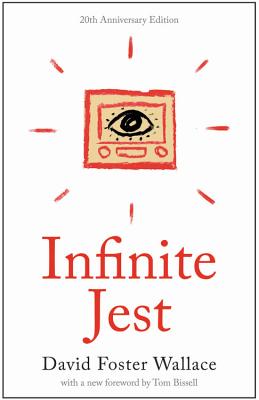 Somewhere in the not-so-distant future the residents of Ennet House, a Boston halfway house for recovering addicts, and students at the nearby Enfield Tennis Academy are ensnared in the search for the master copy of INFINITE JEST, a movie said to be so dangerously entertaining its viewers become entranced and expire in a state of catatonic bliss . . . 'Wallace's exuberance and intellectual impishness are a delight, and he has deep things to say about the hollowness of contemporary American pleasure . . . sentences and ... Read More

Somewhere in the not-so-distant future the residents of Ennet House, a Boston halfway house for recovering addicts, and students at the nearby Enfield Tennis Academy are ensnared in the search for the master copy of INFINITE JEST, a movie said to be so dangerously entertaining its viewers become entranced and expire in a state of catatonic bliss . . . 'Wallace's exuberance and intellectual impishness are a delight, and he has deep things to say about the hollowness of contemporary American pleasure . . . sentences and whole pages are marvels of cosmic concentration . . . Wallace is a superb comedian of culture' James Wood, GUARDIAN Read Less

All Editions of Infinite Jest

This Is Water: Some Thoughts, Delivered on a Significant Occasion, about Living a Compassionate Life

Consider the Lobster: And Other Essays

Blood Meridian: Or the Evening Redness in the West

The Broom of the System

I just discovered Wallace and believe me, all the praise is deserved. This is a fascinating interweaving of stories and styles - all of them in such a true voice.
Can't believe he's gone.

What genre of novel is Infinite Jest? Spy thriller? Coming of age? Science fiction? Pot boiler? Psychodrama? Sports tale? Political satire? Pharmacopoeia? Action adventure? Side-splitting comedy? Great literature? YES, to all of the above. I'm recommending this book to all of my friends because I want to have people to talk to about it. Infinite Jest has been listed as one of the top 100 All Time Greatest Novels of 1923-2006.

Logophiliacs, lovers of words, will revel in this appetizer, salad, entree and piece de resistance of an entire word meal. Rather, each reading is a meal -- the whole tome is practically a steady diet. Whether you are a word gourmet or gourmand, Infinite Jest provides it all for you. If you have ever spouted a pun that went over heads or offered sarcasm that was taken literally, then this book is for you. You can practice catching word plays thrown at the speed of light and I can almost assure you that even YOU will fumble a few. The author was appointed to the usage panel for the American Heritage Dictionary and was a fan of The Oxford English. It seems clear, after several trips to the 'net for diction assistance, that he wanted to get in the OED himself. I hope he makes it, some of his new word forms and usages are dynamite.

Infinite Jest introduced me to style breakthroughs that I hope will be emulated: fictional endnotes, even meta fictional endnotes (if that is what you would call the fictional endnote containing the fictional footnote.) This author fears no new literary device and mixes them up with wide-grinning glee. Mr. Wallace also has developed stream-of-consciousness writing to it's finest degree yet. Previous authors have written the stream-of-consciousness of the protagonist in the language of the author; David Foster Wallace has written the cognitive processing of his characters in the very language of the characters themselves including the misspellings and vocabulary peculiarities that would be used by the character. This technique took me right into the cortex of the characters; I could feel the pleasure and the pain almost better than second hand.

I am a new David Foster Wallace fan: somehow, his name never stuck in my awareness files until I read his obituaries in a magazine this Fall. Since excellent writers were so distraught at
Mr. Wallace's untimely suicide I needed to see what I had missed. Through the thoughts, feelings and experiences of several of his characters, Mr. Wallace has shown us poignantly the pain of his own life which was stalked by intractable depression and substance addiction. I join many of his students in forgiving him for depriving us of more of his spellbinding work -- the hurt was too large.

As a producer of stuff, in my case music, I am confronted with how much product is out there that mine must endeavor to rise above to succesfully clamor for significant public attention.

As a consumer, I am confronted with how much product is unspectacular, even if it does receive significant public attention.

As a seasoned consumer of books, I appreciate authors with adventurous creativity regardless of whether they receive significant public attention.

All that being said, I can only express how fortunate I feel that this book found me and I found it. It would've been so easy for us to miss each other.

I felt compelled throughout to read it aloud, such was the almost poetic quality of it. It is filled with brilliant to-the-left humor and many opportunities to marvel at the far-reaching imagination of the human mind.

But although it stretches the boundaries of fiction, it does what all great fiction does well in that it provides a lens through which we may see ourselves. In this case, we see our somewhat twisted society with renewed clarity -- we see, in all its repugnance, the ludicrous determination of the over-indulged to find happiness via an ultimate source of numbing entertainment.

It is a superb work that feels like a blend between the ticklish quality of a child's mindless free-association and the mysterious and profound illuminating quality of a koan that resulted from a shaman's most devout, pure and total concentration.

Well worth the effort!

The first two times I started this tome (it's over 1000 pages, plus an additional 300 pages of ENDNOTES), I gave up. It's twisted, confusing and schizophrenic in its pace. Whatever the reason, I gave the book a third chance - and persevered.

It is completely worth the effort.

The story - somewhat - is a tale of a tennis prodigy, a movie (called 'Infinite Jest') that is so captivating it renders the viewers useless, a rehab center and...well, lots and lots more. Though its trite, half the enjoyment of this book is the journey and not the story - but the story is great. Clever and funny, satirical and poignant, Infinite Jest is a struggle worth working through.

(One note - use two bookmarks...one for the book, one for the endnotes.)