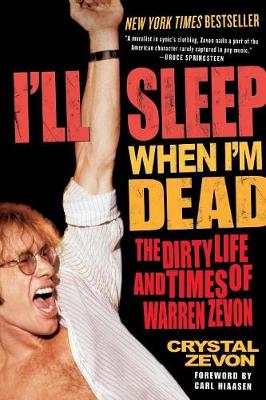 I'll Sleep When I'm Dead: The Dirty Life and Times of Warren Zevon

Provocative and unflinching, "I'll Sleep When I'm Dead" is the extraordinary oral biography of fabled singer-songwriter Warren Zevon, as told by his famous and notorious friends, lovers, and accomplices. Read More

Provocative and unflinching, "I'll Sleep When I'm Dead" is the extraordinary oral biography of fabled singer-songwriter Warren Zevon, as told by his famous and notorious friends, lovers, and accomplices. Read Less

All Editions of I'll Sleep When I'm Dead: The Dirty Life and Times of Warren Zevon

The Downhill Lie: A Hacker's Return to a Ruinous Sport

Unflinching look at the Sam Peckinpah of Rock

This book is a series of interviews done of people who knew Warren very well, and some whose observations might have been on target because they didn't know him.
It did drop the illusion I had that Warren was not pretentious, because he appears to be quite uppity at times.
What stood out most, besides his obvious talent, was the devastation that his alcoholism wreaked on those who knew and loved him. His total self-involvement with his addictions was one that many people who have addicts in their families are probably familiar with. It angered me that one so bright could be so blind, yet that is how it works with booze and drugs. His children add to the interviews and talk of how Warren's problems affected them.
Crystal Zevon gives us a glimpse of his life and hers, which was, at times, pretty harrowing in nature. She does talk of good things, of course, but it was sad that Warren just couldn't exorcise his demons for such a long time.
His genius shines throughout it all, though. We read about how he came to write some of his wonderful songs and it's very entertaining.
Check this book out if you want to read about the real Warren, warts and all. I admire Crystal for her continued love for him and for what they had together.
Warren's sad end was distressing for his fans, as well as those who knew him, but I think he was reaching out when he asked us to keep him in our hearts for awhile. I will.