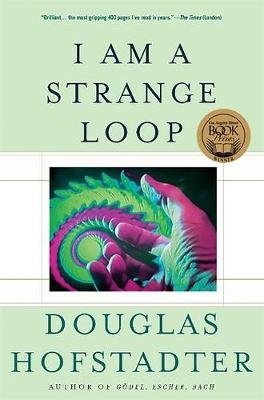 I Am a Strange Loop

Hofstadter--who won a Pulitzer for his 1979 book, "Gdel, Escher, Bach"--blends a surprising array of disciplines and styles in his continuing rumination on the nature of consciousness. Read More

Hofstadter--who won a Pulitzer for his 1979 book, "Gdel, Escher, Bach"--blends a surprising array of disciplines and styles in his continuing rumination on the nature of consciousness. Read Less

All Editions of I Am a Strange Loop

Masters of Deception: Escher, Dali & the Artists of Optical Illusion

The Mind's I: Fantasies and Reflections on Self and Soul

Surfaces and Essences: Analogy as the Fuel and Fire of Thinking /

Metamagical Themas: Questing for the Essence of Mind and Pattern

The author is brilliant but I found most of the book difficult and pointless. The author gets personal about two-thirds through the book and I found that chapter moving. His construction of the human identity from feedback we get from others is excellent as far as it goes. But he doesn't posit anything beyond the ego, which I find shallow.

This book outlines Hofstadter's theory of consciousness. The book is well written, but I found it difficult to read the first part, even though I have an affinity with math, due to the amount of mathematical theory used as a metaphor to illustrate Hofstadter's concepts. What follows is an excerpt from a critical summary paper I wrote for one of my classes in graduate school.
Hofstadter uses the terms ?consciousness,? ?inner light,? ?I?, and ?soul? interchangeably. He theorizes that each human is born with a blank slate of consciousness or essentially ?no soul.? Over time, our brains categorize the phenomena we take in with our senses into symbols. Symbols are structures housed within our brain cells and they represent ?concepts.? Symbols are then grouped into categories or successively more complex patterns of structures, ad infinitum. Eventually, the human develops a sense of ?self? or ?I? which is the sum of his or her concepts of ?hopes,? ?dreams,? ?experience,? etc. According to Hofstadter, the ?I? is an illusion; his entire theory of consciousness is built on the laws of physics. There is no ?duality? of belief in some extraordinary, non-physical essence that makes each of us an ?I.?
Hofstadter uses analogy and metaphor throughout the book to substantiate his ideas. His theory is not based on scientific evidence ? it is presented as a logical argument ? he even uses a dialog format in two of his chapters. Hofstadter defines a macro-level view and a micro-level view of consciousness. At a micro-level, the brain operates mechanically through a process of ?squirting chemicals? through synapses, neurotransmitters and other physical components. All activities of thought and consciousness come from these mechanical activities. From a macro-level perspective, symbols, which represent concepts, are housed in structures within the brain and combinations of these structures form ?multilevel systems." Hofstadter says there?s no physical location for the ?I? structure, it is somehow present across the entire brain, but he doesn?t link them to the micro-level view. I see this as a flaw in his argument that we are essentially mechanical beings because he can?t describe the linkage between micro and macro views.
Hofstadter briefly references traditional psychology twice in the text. He references two books <this review editing program won't allow me to put the author's name here because it thinks her name is a bad word> Our Inner Conflicts (1945), and Self-Analysis (1942) and suggests readers be reminded ?of the immense psychological complexity that lies at the core of all human existence." I believe the text needs a more comprehensive discussion of psychological and human development concepts including theories and how they do or don?t apply to Hofstadter?s claims.
Overall, this book will challenge your thinking and cause you to question and understand your definitions of "soul" and "self."