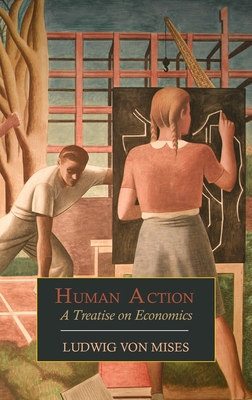 Human Action: A Treatise on Economics

All Editions of Human Action: A Treatise on Economics

The theory of money and credit

Socialism: An Economic and Sociological Analysis

The Theory of Money and Credit

The theory of money and credit

This is a very interesting book. Shows you where this Country is headed.

There's a theory that big fat books change the world. Augustine's 'City of God', Aquinas' 'Summa Theologia', 'War and Peace', Das Kapital, et cetera, are all examples of that theory at work.

'Human Action' is just such a big fat book. It is perhaps one of the most remarkable works on free-market economics in print, written by one of the masters of the so-called Austrian School of economics, Ludwig von Mises. To this day it remains a cornerstone of the libertarian movement. Because of certain Austrian assumptions about economics, namely that it would be an axiomatic deductive science like math, rather than an empirical based science like physics, Human Action, despite its breadth and depth is relatively easy to read and can be understood by any educated lay-person. If you want to understand why the free-market and personal liberty are the only rational way to live, then read this book. And then check out Murray N. Rothbard's companion big fat book, 'Man, Economic, and State.'