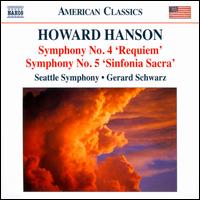 These Howard Hanson recordings by the Seattle Symphony Orchestra under their champion of American music, Gerard Schwarz, were originally made in 1991 as part of a large Hanson cycle released by the Delos label around that time. They did not ignite a real revival of this "American Romantic," but neither has his music died out; it's wonderfully orchestrated and has a certain honest quality that has made it wear well even if there's a shortage of really memorable melody. The producers of this Naxos reissue have combined works ... Read More

These Howard Hanson recordings by the Seattle Symphony Orchestra under their champion of American music, Gerard Schwarz, were originally made in 1991 as part of a large Hanson cycle released by the Delos label around that time. They did not ignite a real revival of this "American Romantic," but neither has his music died out; it's wonderfully orchestrated and has a certain honest quality that has made it wear well even if there's a shortage of really memorable melody. The producers of this Naxos reissue have combined works from several different Delos releases, resulting in a program with a common focus that brings out the best in Hanson's music. All of these works are of a memorial or somehow otherwise religious cast. The Symphony No. 4 ("Requiem"), entirely orchestral, was written after the death of the composer's father and takes its movement titles from those of sections of the Requiem mass. Here and elsewhere, Hanson combines his late Romantic language (Sibelius, mostly, with dashes of Vaughan... Read Less 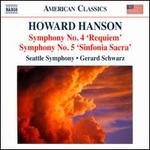 The American composer Howard Hanson (1896 -- 1981) composed seven symphonies in an openly unabashed romantic idiom. Although his music is out of fashion, it has been well served on recordings. In the late 1980s- 1990s, Gerard Schwartz and the Seattle Symphony recorded the symphonies on the Delos label. The budget-priced Naxos label has reissued the Hanson cycle on its "American Classics" series, making Hanson readily accessible to listeners wanting to get to know his music. Hanson's writing has not had a great deal of appeal for me over the years. But I am enjoying this set and expanding to a degree my ability to appreciate a style of music that does not initially attract me.

This CD includes Hanson's fourth and fifth symphonies together with two other orchestral works. The works share a religious, elegiac theme. Hanson grew up in the small midwestern town of Wahoo, Nebraska, where he heard and took to heart the hymns and chorales of the Lutheran Church. He remained a devout Christian all his life. These works also share heavy brass chorale passages alternating with frequently lovely lyrical sections, the use of counterpoint, modal melodies, and orchestration which features the winds.

Composed in 1943, the Symphony No. 4, "Requiem" commemorates the death of Hanson's father. This is a mostly somber four movement work of about 25 minutes, with the movement titles and musical characteristics derived from the Requiem Mass. The work alternates motions of turbulence and tragedy with sections of peace and contemplation. It opens with the former and ends with the latter, as the music struggles to accept the death of a loved one. The work features brass chorales, simple reflective themes, and a quiet accepting close. This work received the first Pulitzer Prize awarded for a musical composition. The recording dates from 1990.

Hanson's Symphony No. 5,"Sinfonia sacra", Op. 43, is in a single taut movement of 15 minutes, reminding me of Sibelius' seventh symphony. This symphony as well has a broad religious theme of the motion from death and sorrow to life. The music opens somberly and slowly in the lower register of the orchestra. The opening is followed by an alternation of chorale and dance like passages and includes the use of chants and a lovely short solo for the English horn. The work concludes with a loud peroration followed by a hushed ending. Premiered in 1955 by Eugene Ormandy and the Philadelphia Orchestra and recorded here in 1992, this symphony rewards hearing.

In 1956, Hanson composed an "Elegy in Memory of Serge Koussevitzky", the conductor of the Boston Symphony Orchestra and a close friend, who had died five years earlier. This piece of about 12 minutes is a melancholy, religiously influenced meditation on death. Again in this music tragic, chorale sections alternate with simpler, gentler passages. The oboe, clarinet, flute, and harp receive prominent solo passages. The Boston Symphony premiered the work. Schwarz and the Seattle Symphony recorded in in 1988.

The final work on this CD is the "Dies Natalis", composed in 1967 to commemorate the 100th anniversary of Hanson's beloved Nebraska. This is a work of 16 minutes which opens and concludes with an extended ceremonial chorale theme with seven short variations in between. The theme is modeled on the Lutheran chorales which so impressed the composer during his youth. The variations on the theme are brief but diverse in character ranging from calm and quiet to stormy. The centerpiece of the variations, no. 4, marked "Andante calmo, nel modo Gregoriano", features a Gregorian chant performed by a solo oboe. The recording dates from 1994.

Listeners who want to get to know American music will enjoy this CD. I particularly liked the symphony no. 5 and the "Dies Natalis". The liner notes on each work are musically good and informative.