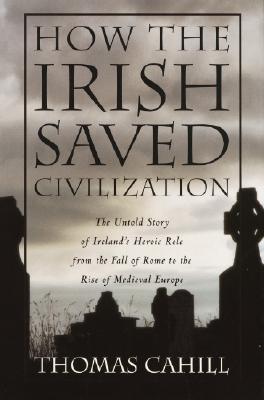 How the Irish Saved Civilization

This narrative tells the story of how Europe evolved from the classical age of Rome to the medieval era. Without Ireland, this transition could not have taken place. Irish monks and scribes maintained records of Western civilization and brought their uniquely Irish world-view to the task. Read More

This narrative tells the story of how Europe evolved from the classical age of Rome to the medieval era. Without Ireland, this transition could not have taken place. Irish monks and scribes maintained records of Western civilization and brought their uniquely Irish world-view to the task. Read Less

All Editions of How the Irish Saved Civilization

How the Irish Saved Civilization: The Untold Story of Ireland's Heroic Role from the Fall of Rome to the Rise of Medieval Europe

The gifts of the Jews : how a tribe of desert nomads changed the way everyone thinks and feels

The Gifts of the Jews: How a Tribe of Desert Nomads Changed the Way Everyone Thinks and Feels

Desire of the Everlasting Hills: The World Before and After Jesus

Mysteries of the Middle Ages: The Rise of Feminism, Science, and Art from the Cults of Catholic Europe

Sailing the Wine-Dark Sea: Why the Greeks Matter

The gifts of the Jews : how a tribe of desert nomads changed the way everyone thinks and feels

The art of the historian and the storyteller

I missed this somehow. It was first published in 1995 and someone gave me a copy more than ten years ago, but I got distracted by other things, by life, which seems so frequently to get in the way of my plans.
Thomas Cahill's subtitle for his book is: The Untold Story of Ireland's Heroic Role from the Fall of Rome to the Rise of Medieval Europe. That's accurate, but it tells you far less than the book offers. History can be little more than a dusty recitation of facts (I once had a professor of Greek and Roman history who could make me yawn until my jaw creaked) or it can be a magical transportation back across millennia, a process of bringing long dead worlds, long dead cultures, long dead people vibrantly alive again, and that process of resurrection takes both imagination and a capacity for telling a story. What a good historian does is approach his topic not solely as history so much as a tale to be told by a turf fire in a stone cottage on a dark and stormy night; in other words, a good historian transforms himself into an Irish seanchaí, and Thomas Cahill, son of Irish-American parents, knows his craft. And more than simply telling the tale, Cahill also provides a context for fifth-century Ireland that creates a mirror for today and tomorrow. All history is both mirror and signpost, but not all historians provide that context.
Part of Cahill's skill lies in his ability to weave seminal figures (St. Augustine of Hippo, for example) together with people so obscure they almost-but not actually-qualify as fictional (his humorous extrapolation of character from a tiny thumbnail self-portrait of a scribe on a 1600-year old illustrated manuscript), using both to lay the foundation for historical facts and to give those facts life and interest. What do we actually know about Saint Patrick? Not much, based on what is traditionally considered to be historically factual, but when we search for the character of the man in his own writing, and compare that to what is known about him (birth, death, kidnapping, his life as a slave, seminal accomplishments, seminal failures-for failure can be both as instructive and revealing about a man as accomplishments) a portrait comes to life of a specific and compelling and very human saint, one about whom we long to know more.
And by bringing these men and these times alive, Cahill tells us about the extraordinary burst of creativity that occurred, improbably, on a remote island on the outer fringes of the known world, a burst of creativity that preserved both religious and secular classics, for the early Irish Christians seem to have been remarkably free of the religious prejudices of the Roman Catholic Church. Both the creativity and the lack of prejudice were due in part to St. Patrick, and in part to the Irish tongue, a Gaelic that has sadly almost vanished from the world, in large part due to the thousand-year long rapine and narrow-minded arrogance of the rulers of the British Empire. The Irish have always been known for their addiction to words and language and story-telling; perhaps the loss of Gaelic has diminished that somewhat, but then again, perhaps not. Consider some of the recent geniuses of Irish literature-William Trevor, Roddy Doyle, Sebastian Barry, Brian Friel, Maeve Binchy, Frank McCourt, John Banville, Seamus Deane, Iris Murdock... And those are just living ones whom I happen to have read. (Well, Iris Murdock has died, but I still count her as a current contemporary.)
There is one other living contemporary Irish writer who deserves mention here. Okay, okay, if you want to be a stickler for facts, Thomas Cahill was actually born in Queens and raised in the Bronx, but he clearly inherited an Irish love of words and how to put them together even as he relates past to present, and present to future. Remember that he wrote this back in the early nineties, and consider the following:
"Rome's demise instructs us in what inevitably happens when impoverished and rapidly expanding populations, whose ways and values are only dimly understood, press up against a rich and ordered society. More than a billion people in our world today survive on less than $370 a year, while Americans, who constitute five percent of the world's population, purchase fifty percent of its cocaine. If the world's population, which has doubled in our lifetime, doubles again by the middle of the next century, how could anyone hope to escape the catastrophic consequences-the wrath to come? But we turn our backs on such unpleasantness and contemplate the happier prospect of our technological dreams."

This is a wonderful scholarly work, describing how Irish monks managed to acquire and copy texts from the acient world.
These became the basis of the renewal of learning in Europe at the start of the Middle ages. Remarkable is the inclusion of Roman and Greek references. Thoroughly enjoyed the book, and gave a copy to my best friend.