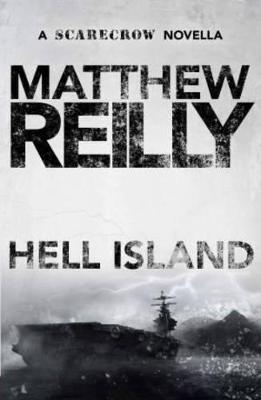 All Editions of Hell Island

Are there any Scarecrow fans out there? I am definitely one. You can count me among those that have read everything that is available that Matthew Reilly has written, including the YA Hover Car series. The last time I posted on a Matthew Reilly novel was for the Five Greatest Warriors novel (please check the archives for that; I loved it). Here is what this short novel is about:
?This revised edition of the short novel originally published in Australia is specially adapted for readers of all ages with reading difficulties. There is no hell like a man-made one...It is an island that doesn't appear on any maps. A secret location where classified experiments have been conducted. Experiments that have gone terribly wrong...When all contact with this mystery island is inexplicably lost, four crack special-forces units are brought in, their mission being to land on Hell Island and discover what has happened. Nothing can prepare them for what they find there. You could say they've just entered hell. Only that would be too gentle.?
When I picked this up from the library (yes, I do do that, the librarians are very nice to me, and it is an excellent resource), I was a bit surprised by the size of it, 128 pages. A Shane Schofield novel is usually much longer than that and this bad boy had a few pictures in it to go along with the story, very nice. I am going to give you a piece of the introduction by Matthew Reilly. I found the genesis of this novel very interesting:
?Hell Island was originally written for an Australian Government initiative called Books Alive, the objective of which was to get Australians into bookstores and reading more. I was approached to write a short novel, no longer than 110 pages that would be given away to Australians for free for a month. I thought this was a fantastic idea and jumped at the chance.
I wrote Hell Island.
More than that, I set out to write 110 pages of the most kick-butt, over- the- top, blindingly fast action I could. It?s not often you get a chance to show your stuff to the general population for free, so I seized the opportunity with both hands.?
I believe the last time we saw the Scarecrow he was nursing a beer sitting on a chaise lounge pondering life?s questions and his next move in life. I was hoping that Matthew Reilly would get back to the character quickly, but I guess we Americans had to wait a bit. All that aside, this is a fine ride with Mother, Scarecrow and a host of characters that come at the readers fast and furiously. Reilly certainly packed a ton of action into such a short space; he accomplished everything he set out to do. Putting it down is not really an option, it is a nice cover to cover read, that moves fast and hard. Reading this will not put you through hell, but make you an island as you will not want to be bothered as you read it. Merry Christmas and Happy New Year to all our wonderful supporters and readers, thanks so much for an incredible 2010.
What are you reading today? Check us out and become our friend on Shelfari & Linkedin. Go to Goodreads and become our friend there and suggest books for us to read and post on. You can also follow us on Twitter, Wattpad and the Gelati?s Scoop Facebook Fan Page. Did you know you can shop directly on Amazon by clicking the Amazon Banner on our blog? Thanks for stopping by today; We will see you tomorrow. Have a great day. http://www.gelatisscoop.blogspot.com