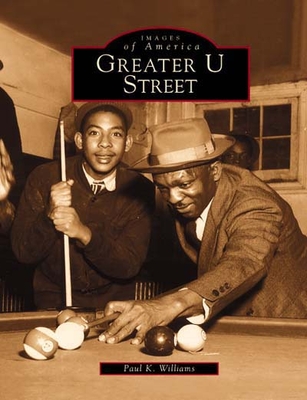 On the edge of the 1792 original city plan by designer Pierre L'Enfant lies the Greater U Street neighborhood. For nearly 70 years before the Civil War, orchards and grazing land covered the area. When Camp Campbell was settled during the war where Sixth and U Streets now lie, thousands of fighting soldiers and then freed men and women flocked to the area. The fighting ceased, and many people remained to construct small wood frame homes, churches, and businesses that eventually gave way to the elegant rows of substantial ... Read More

On the edge of the 1792 original city plan by designer Pierre L'Enfant lies the Greater U Street neighborhood. For nearly 70 years before the Civil War, orchards and grazing land covered the area. When Camp Campbell was settled during the war where Sixth and U Streets now lie, thousands of fighting soldiers and then freed men and women flocked to the area. The fighting ceased, and many people remained to construct small wood frame homes, churches, and businesses that eventually gave way to the elegant rows of substantial brick townhomes lining the surrounding street today. The rise of racial segregation in the early 1900s cultivated the Greater U Street area into a "city within a city" for the African-American community, and it remained so until the urban riots of 1968. The 1920s and 1930s witnessed a thriving cultural scene, with entertainers such as Sarah Vaughn, Pearl Bailey, Cab Calloway, and the neighborhood's own Edward "Duke" Ellington frequenting private clubs like Bohemian Caverns and other venues such as the Howard, Dunbar, Republic, and Lincoln Theaters. Known by many as the "Black Broadway," Greater U Street was unique in that many of its institutions-Industrial Bank and True Reformers Hall among them-were designed, financed, owned, and built utilizing the talents of such emerging African-American professionals as banker John Whitelaw and architect John A. Lankford. Read Less

All Editions of Greater U Street

The Guide to Black Washington

Alley Life in Washington: Family, Community, Religion, and Folklife in the City, 1850-1970

A City Within A City

The U Street Area of Washington, D.C. has had a long and varied history. It is best known as Washington D.C.'s Black Broadway for the vibrancy of its nightlife and for the many African American performing artists and intellectuals it attracted during the 1920s - 1930s. But U Street included much more than entertainment. It was the center of a largely self-contained African American community which flourished during the years of segregation beginning in the early 20th Century. In the late 1960s, U Street was decimated by the riots that followed the assassination of Dr. Martin Luther King, Jr., and the community was slow to recover. Today, with the completion of the U Street Cardozo Metro Station, the African American Civil War Memorial, and the Reeves Municipal Center, U Street is a thriving and lively neighborhood in a city very different from the segregated Washington D.C. prior to the 1960s. The Greater U Street Area became a National Register Historic District in 1999.

In his photographic history "Greater U Street" (2002), published as part of the "Images of America" series, Paul K. Williams offers an overview of U Street from its beginnings to the present day. Williams is a Washington D,C, historian who works with a firm that specializes in historic properties. He has written several books about Washington D.C. neighborhoods for Images of America.

In a brief opening chapter, William begins with the Civil War era when the area that became U Street was used as an encampment area for Union soldiers. William offers some rare views of Civil War life and of the hospitals and orphanages, and some of the people, that made U Street home before the 20th Century.

The remainder of the book traces the development of what became black U Street, the "City Within a City". Williams offers a view of both change and continuity. Many historic buildings on U Street were designed by African American architects, flourished through the 1960s, and then fell into neglect. Williams traces the history of buildings such as the Whitelaw and Dunbar Hotels, the 12th Street YMCA. and the True Reformers Building, all of which have a long history within the community. Williams also devotes substantial space to old Griffith Stadium, located at the eastern boundary of the U Street Corridor, the site of the current Howard University Hospital. Griffith Stadium was on of the few Washington D.C. facilities which was never segregated. It was home to the old Washington Senators as well as to Washington D.C. teams in the Negro Leagues.

Williams documents U Street as the "Black Broadway" and his book is replete with photographs of performers who appeared on U Street. These include Bessie Smith, Billie Holiday, Sarah Vaughn, Ella Fitzgerald, Duke Ellington, Cab Calloway, Pearl Bailey,Louis Armstrong, and Harry Belafonte. The list could be extended. U Street was also home to the early African American lyric soprano, Lillian Evans Tibbs, known as "Madame Evanti" and to literary figures such as Langston Hughes, Jean Toomer, and Alain Locke who are also portrayed briefly in Williams's book.

In the chapter from which I took the title to this review, Williams shows everyday life on U Street during the 1940s and 1950s. During this time, the area included many African American owned businesses some of which, such as the Industrial Savings Bank and the small Whitelaw Market, still operate today. For me the high point of the book is a series of photographs by the African American photographer Gordon Parks which show a wide variety of U Street life, from stores to homes to street. Parks's photographs together with others (pp. 71-84) bring the U Street area to life as little else can.

Near the end of the book, Williams offers several photographs of the destruction resulting from the riots on U Street in 1968. He also tells the sad tale of the subsequent deterioration of many of the community landmarks. Recovery was slow, in part because the construction of the Metro station restricted access to U Street, driving out many of the businesses that tried to return to the area in the early 1970s.

The final chapter of the book shows briefly the current resurgence of U Street, juxtaposed with photographs of historical buildings that remain in a state of decay. Appropriately, the book both begins and ends with photographs of a landmark U Street restaurant, Ben's Chili Bowl, which survived both the 1968 disturbances and the Metro construction to celebrate its 50th Anniversary in August 2008. Ben's Chili Bowl is itself the subject of a recent book in the Images of America series.

Those who live in or visit Washington D.C. have the opportunity to visit U Street for themselves, to walk a historic trail, and to see the sites described in this book and more. But for those who may see U Street and for those who have no contact with it, this book captures something of a special community.