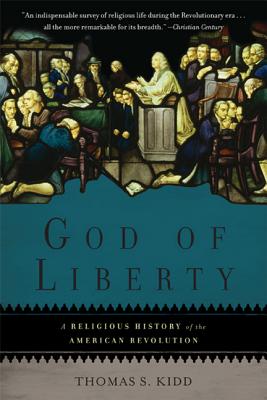 God of Liberty: A Religious History of the American Revolution

Balanced without being bland, lucid in the telling, Thomas Kidd s chronicle corrects the excesses both of those who overstate the degree to which America was founded as a Christian nation and of those who seek to minimize the formative role of religion in the new nation s character. "Christianity Today"" Read More

Balanced without being bland, lucid in the telling, Thomas Kidd s chronicle corrects the excesses both of those who overstate the degree to which America was founded as a Christian nation and of those who seek to minimize the formative role of religion in the new nation s character. "Christianity Today"" Read Less

All Editions of God of Liberty: A Religious History of the American Revolution

America's Religious History: Faith, Politics, and the Shaping of a Nation

A History of the American People

Theology of the New Testament: A Canonical and Synthetic Approach

The Great Awakening: The Roots of Evangelical Christianity in Colonial America

Baptists in America: A History

GOD OF THE REVOLUTION

GOD OF LIBERTY: A RELIGIOUS HISTORY OF THE AMERICAN REVOLUTION by Thomas Kidd
BASIC BOOKS 2010

Mr. Kidd is an Associate Professor of Religion at Baylor University. I believe he has provided us with an important work concerning a subject that has been woefully neglected for this period. When Mr. Kidd keeps to the period and facts he is right on. There are a number of area?s where he applies modern ethics to the period under discussion and he couples this with condemnation. This is neither fair, nor a proper way to reflect on history.

Mr. Kidd does not seem to understand the difference between a Republic and a Democracy. He confuses these terms a number of times. He indicates that our founders were drawn to the Greek ?Spartan Republic?. Ancient Greece did not have republics, only democracies. Solon, the great Greek philosopher & leader of Athens, was the father of republics but no Greek state ever adopted his form. Sparta was not even a democracy, but a Kingdom and had one of the most closed societies the Earth has ever seen.

To my knowledge, Rome was the only ancient nation to adopt a republican form of government. They followed Solon?s form. Mr. Kidd indicated that the ancient republics could not affect a virtuous state. This was also wrong. Rome, in its early & mid stages was virtuous. Obviously they were not Christian, but they adopted many of what we would hold as virtues and thrived by doing so. It was only when they started down the wrong road to empire that their faith failed & with it their virtue.

Our founding fathers despised democracy. They pointed to Greece as an example of how democracy failed to protect the rights of the citizenry and often devolved into tyranny. Madison pointed out how democracy equates to mob rule and that mobs are usually controlled by a clever oligarchy, usually not to the benefit of the state. A republic is based on the rule of law, where individual rights are protected and majority rule is not supposed to negate those rights. The great ancient example of how democracy fails is how the majority voted for Socrates to commit suicide, to the grief of Athens.

Two modern republics they studies was the Dutch Republic and the Swiss Republic. In both cases they could see that faith within their societies was very strong. Mr. Kidd does not mention this,

The one area where Mr. Kidd seems to intrude modern understandings on 18th century life is in the area of slavery. Obviously no one living today in faith (or probably otherwise) would condone slavery. Still, he should comment on this subject relative to the period. He is especially critical towards Jefferson. It was only in the 18th century that the question of slavery was being seriously discussed and Jefferson was ahead of his time in the matter. To condemn Jefferson for failing to fully take this to the next level is rather unfair. It should be noted that his failure was due to economic reasons that were caused by his serving his nation. He even sold his beloved library to the nation to replace that which the British destroyed. At that time slavery was generally accepted and had been since time began. Most slaves were white historically. Slavery existed throughout the world and not just in the United States. Yes, it is wrong (even more so today, but it exists in Muslim lands and the slave camps in various communist states) so why be so negative rather than express pride that our ancestors were at least seeing this as evil.

Mr. Kidd touches on the continuing disagreement about faith and government. He correctly points out that all the Founders saw the need for Christianity in our nation in order for the nation to be virtuous. This view was held by both believers and non-believers. He does mention the failure to mention God in the Constitution, but I wonder who he thinks they were referring too when it states in the Preamble ??.secure the ?blessings? of liberty?? Blessings come from somewhere?.

Some of Mr. Kidd?s comments trouble me at times and I urge some caution. Rather than continue I would state it is still worth a read Mr. Kidd really has an understanding of the denominational structure for the period and how they inter-related & affected the political atmosphere of the time. Unless this is factored in you cannot properly understand the period and what happened. How strange it is this is rarely covered in any histories I have read. It most certainly affected our history & in ways that may surprise you.