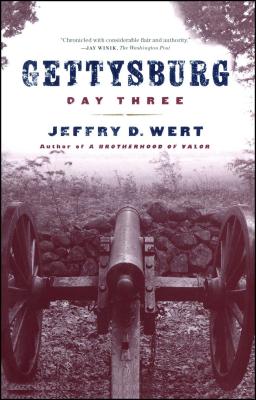 Drawing on hundreds of sources, Wert offers brief excerpts from the letters and diaries of soldiers that shed new light on the Battle of Gettysburg and introduces heroes on both sides of conflict. of photos. 9 maps. Read More

Drawing on hundreds of sources, Wert offers brief excerpts from the letters and diaries of soldiers that shed new light on the Battle of Gettysburg and introduces heroes on both sides of conflict. of photos. 9 maps. Read Less

All Editions of Gettysburg Day Three

A Brotherhood of Valor: The Common Soldiers of the Stonewall Brigade C S A and the Iron Brigade U S A

The Sword of Lincoln: The Army of the Potomac

Jeffrey Wert has written a very good study of the climactic third day at Gettysburg, which includes Pickett's charge, but much more. Especially valuable is the discussion of the calvary engagements, which are too often overlooked in other accounts and which demonstrate the criminal incompetence of Judson Kilpatrick to command anything beyond a headquarters guard detail. Wert focuses on the soldier's reactions to the battle, quoting them extensively. This has the value of letting participants speak for themselves, giving an immediacy to the narrative which more analytic studies lack. Wert also gives considerable attention to the breakdown of Lee's command system, especially as it relates to the failure to support Pickett's charge or to prepare for a follow-up to the original charge, noting that several of the Confederate brigade-level commanders voiced the opinion that they could break the Union line, but not hold it without the follow-up supports.
One flaw in this volume is the almost-useless maps which accompany it. Wert goes into great detail about the disposition of artillery, both on the Confederate and the Union side. But the accompanying maps do not contain some of the important farm names which are frequently cited, nor do they give any information about the battery locations or names. If you want to pursue Wirt's detailed descriptions of battery location, you will need to have a good battlefield atlas at your desk.