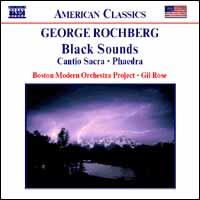 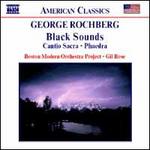 This CD consisting of three works by the contemporary American composer George Rochberg (1918 --- 2005) will be a revelation to those listeners who shy away from modern music as cold, overly technical, and cerebral. Rochberg began his compositional career writing predominantly in an atonal idiom. Beginning in the mid-1960s he began writing tonal music as well, and his more recent compositions are predominantly tonal in character. In fact, many American composers, among them, Ives, Copland, Seigmeister, Orenstein, have moved between modernistic and more traditional musical styles at various points in their lives.

Back to passion. Of the three selections on this disc, two are wildly emotional affairs with themes of uncontrollable love and lust and of murder. I was gripped in particular by "Phaedra" (1973) which Rochberg describes as "a monodrama in seven scenes."

This work is based on Racine's play, which in turn is based upon Euripides. It is a tale of Phaedre's incestuous love for Hippolytus, the son of her husband, Theseus. The piece is in seven movements four of which are for mezzo-soprano, speaking in the voice of Phaedre, and three of which are for small chamber orchestra alone. The vocal lines are passionate and declamatory and express to the hilt the feelings of love, lust, and uncontrollable rage. Mezzo-soprano Mary Nessinger is outstanding in this performance. Fury comes through her voice, as she handles large vocal leaps and lets her voice snarl with anger. The Boston Modern Orchestra Project complements her voice in the arias and in the interludes, but this performance belongs to Ms. Nessinger.

This disc also includes a ballet, "Black Sounds" (1965) written for a ballet called "The Act" which appeared on television in 1965. This music too tells a passionate tale of murder. It opens with a sharp, loud passage for strings and brass and, although it ends softly as the deed is done, the music continues with high intensity for its 17 minute duration.

The final work on this CD, "Canta Sacra" (1953) is a transcription of a short set of 12 organ variations by the baroque composer Samuel Scheidt. This music comes as something of a relief to the two outer works on the CD. It is moving and elevated music, well transcribed for orchestra, with little of the visceral, wrenching character of "Phaedre" or "Black Sounds."

George Rothberg supervised the recording of the CD and wrote program notes. The disc is part of Naxos's series of American Classics.