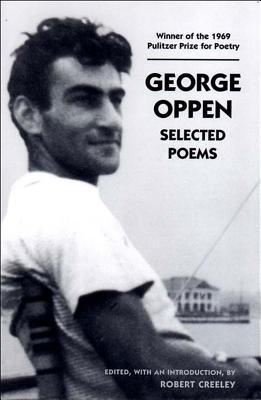 A selection of innovative poems by the groundbreaking Pulitzer Prize winner. Read More

A selection of innovative poems by the groundbreaking Pulitzer Prize winner. Read Less

Notes on the Possibilities and Attractions of Existence: Selected Poems 1965-2000

Presences: A Text for Marisol, a Critical Edition

By the waters of Manhattan

This review is from: George Oppen: Selected Poems (Paperback)

Although his masterpiece is titled "Of Being Numerous", George Oppen (1908 -- 1984) led a singular life and wrote in a singular voice. His poetry explores the tensions between the multiplicity of images, places, ideas, and people, and the solitary self. This selection of Oppen's poetry edited by Robert Creeley includes poems from each of Oppen's published books together with an introductory essay by Creeley, Oppen's only essay, and a useful chronology. It is an excellent introduction to a too-little known American poet.

Oppen led a singular life in that, among other reasons, he began his writing career in the mid-1930s and then underwent a 24-year silence before returning to poetry in 1958. During this time, Oppen travelled with his wife, Mary, worked as a social activist and as a machinist, served in the U.S. Army during WW II, and was active in the communist party. His writing reflects a varied and complex life.

Oppen's poetic voice was also singular. In the mid-1930's he became associated with other important American poets, including William Carlos Williams, Carl Rakosi, Louis Zukofsky, and Charles Reznikoff who wrote in a style described as "objectivist". Their writing aims at conciseness, understatement and particularity. Oppen and his peers tried to create a new poetic language free of convention and stock responses and showing -- or being -- a perception of the world. Oppen's poetry remains true throughout to the teachings of objectivism. But his writing seems to me more philosophically oriented and tends more to a treatment of ideals and questions than the poetry of his fellows.

In the 1960's, Oppen deepened his friendship with the Jewish-American poet Charles Reznikoff and often toured and read with him. Reznikoff's poetry is clear and simple and frequently trends towards Jewish themes. Reznikoff has always been one of my quiet heroes. I find Oppen much harder to read. And, although he was born to an assimilated Jewish family, there is little of Jewish content in Oppen's poetry. Still, there are commonalities between the two.

A poem I particularly enjoyed in this collection was "Image of the Engine" written in 1962. This poem is in five short sections and has been the subject of considerable commentary. It contrasts the cold, impersonal character of a machine, and of the mechanistic civilization based upon it, with the human heart, the need for love and companionship and with "the heart thundering/Absolute desire". Walt Whitman was throughout a great influence on Oppen. I find the best way to approach this poem is as exploring the same themes as Whitman's famous poem, "To a Locomotive in Winter". I don't think Oppen accepts Whitman's optimism on the role of the machine.

But the greatest poem in this book is Oppen's long work, "Of Being Numerous" for which he received the Pulitzer Prize in 1969. This is a poem in 40 short sections which is richly allusive to Blake, William Carlos Williams, and Whitman, among many others. The poem ends with a prose quotation from Whitman.

We live among 'and to see them

Is to know ourselves'."

Much of the poem is a celebration of the diversity of life and experiences in Manhattan coupled with reflections on how the heart of the individual remains one and itself through the multiplicity. (Hence the title and the discussion of "numerosity") In its reflections on numerosity and on the individual, Oppen takes up again Whitman's themes. But he does so in a restrained, disciplined, and focused style. The poem moves seamlessly through a variety of issues such as love, war, social activism and the role of poetry. It is a great modern American poem in the tradition of Whitman but in a unique voice.

Although lengthy, "Of Being Numerous" is more accessible and easier to follow than many of the shorter, more crystallized poems included in this volume.

I also enjoyed Oppen's collection "Some San Francisco Poems" (1972) which does for San Francisco what "Of Being Numerous" does for Manhattan. Oppen was a wanderer and describes the sea, the Bahamas, the European Theatre of WW II, his birthplace of New Rochelle and other places throughout his poetry. But I am most taken with his settings in New York and San Francisco and with his descriptions of industrialization and modernity.

Oppen's poetry needs to be read and reread over time. His is a precious voice.