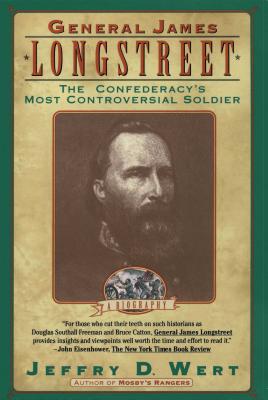 An outstanding battlefield commander, James Longstreet was called "my old war horse" by Robert E. Lee. But Longstreet's role at Gettysburg sullied his reputation forever. Wert uses unpublished memoirs and diaries to restore a balanced view of the career of one of America's great soldiers. 16-page photo insert. Read More

An outstanding battlefield commander, James Longstreet was called "my old war horse" by Robert E. Lee. But Longstreet's role at Gettysburg sullied his reputation forever. Wert uses unpublished memoirs and diaries to restore a balanced view of the career of one of America's great soldiers. 16-page photo insert. Read Less

A Brotherhood of Valor: The Common Soldiers of the Stonewall Brigade C S A and the Iron Brigade U S A

James Longstreet was a keen combat tactician. He knew when to wait on a fight, how to judge the moment when his opponent had spent himself, and when to put in a crushing counter-charge. This talent served him well during the War Between the States. It failed him completely in the struggle to place blame for the loss of the Confederacy. Longstreet, often in the right, was just wrong enough to hobble his reputation as Robert E. Lee's "old war horse."
Jeffry D. Wert's biography of the commander of the First Corps of the Army of Northern Virginia - General James Longstreet: The Confederacy's Most Controversial Soldier - is a balanced look at Longstreet's record as a combat commander in the Civil War. It's an almost impossible task. Confederates who disliked Longstreet during the war had plenty of ammunition to smear his reputation. And even friends who respected Longstreet's ability in war turned against him when he embraced the Federal Government and Republican party during Reconstruction. Jeffrey Wert uses his skill as a researcher and writer to give his readers a nuanced look at Longstreet. He puts the general in context. And without making excuses for his subject, Wert manages to explain the circumstances that led to Longstreet's shortfalls.
For a combat officer, Longstreet is often judged harshly for failings that are more properly of a personal nature. Wert works hard to reclaim Longstreet's reknown as a battle leader of uncommon ability. Longstreet's greatest performances in battle were remarkably understated. His methodical work shaping a battlefield with the First Corps could be overshadowed by the brilliant offensive operations of Thomas Jackson and the Second Corps. Jackson and Lee made better stories than Longstreet. But they both understood and appreciated Longstreet. It's ironic that Lee never wavered in his support of Longstreet, though many former Confederates blamed Longstreet for failure to properly execute Lee's offensives at Gettysburg.
Wert seems most at ease guiding his reader through Longstreet's combat operations. In battle both the writer and the general shine. The fight is their element. Some historians hide in the fog of war. Wert clarifies combat situations and shows Longstreet as a general who learned from his experiences. Far from fighting the "last war," Longstreet seemed to look ahead from battle to battle and adopted advanced tactics that protected his troops and exploited his adversaries dependance on dated tactics.
This biography of Longstreet does not overlook his faults. An ambitious man, sometimes too proud, sometimes too sure of his own abilities, Longstreet was not a perfect executive officer. He sometimes withheld support for his superiors to the disadvantage of his cause. On the Peninsula and at Knoxville he was sloppy and it hurt him. He was jealous of Lee when he should not have been.
But that was not the whole story of James Longstreet. Jeffrey Wert does the best thing a biographer can do. He reconsiders a man once thought dismissable. Perhaps Longstreet wasn't content to be what Lee called "The staff in my right hand," but Jeffry Wert reclaims the value of that place, and reasserts the value of that man.