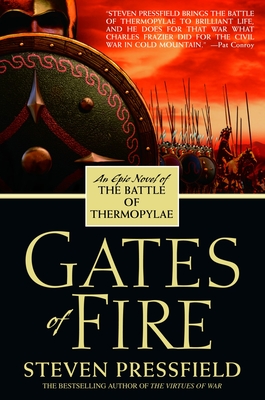 Gates of Fire: An Epic Novel of the Battle of Thermopylae

In 480 B.C., two million Persian invaders come to the mountain pass of Thermopylae in eastern Greece, where they are met by 300 of Sparta's finest warriors. The Greek loyalists battle for six days in a prelude to their ultimate victory. "Pressfield brings the battle of Thermopylae to brilliant life, and he does for that war what Charles Frazier did for the Civil War in "Cold Mountain.""--Pat Conroy. Read More

In 480 B.C., two million Persian invaders come to the mountain pass of Thermopylae in eastern Greece, where they are met by 300 of Sparta's finest warriors. The Greek loyalists battle for six days in a prelude to their ultimate victory. "Pressfield brings the battle of Thermopylae to brilliant life, and he does for that war what Charles Frazier did for the Civil War in "Cold Mountain.""--Pat Conroy. Read Less

All Editions of Gates of Fire: An Epic Novel of the Battle of Thermopylae

The War of Art: Break Through the Blocks and Win Your Inner Creative Battles

Do the Work: Overcome Resistance and Get Out of Your Own Way

The Legend of Bagger Vance: A Novel of Golf and the Game of Life

The Ten Thousand: A Novel of Ancient Greece

Last of the Amazons

I enjoyed this book, It was a little hard following all the charactoers, But it seem to get better as you got further into it.

Live thru the great feat with a great description

Great book, have read a couple from this time but this one stands out with a great narrative, based on the facts, the characters come alive, and the storyteller wraps you with great ability, if you are looking just for facts search somewhere else, this is a great story based on the historical facts, but not a scientific book

I would recommend all of Pressfield's historical fiction books. My son attending college is taking Greek History and Philosophy and we discussed Thucidides' History of the Peloponnesian War which I read over 30 years ago. He bought this book for me for Christmas and I have read all three of his Greek and Macedonian novels. Magnificent, and the artifices Pressfield uses to tell the story are noticeable but acceptable and effective. Great read!

The main theme of this book was indeed the famous Battle of Thermopylae, where about 4,000 Greeks, led by the 300 Spartans and their King Leonidas, held out a force of the Persian warriors about 5 times their numbers.

However, Mr. Pressfield push the story wider to tell about the legendary Spartan way of life and their attitude towards military lifestyle. He chose a remarkable character, a stateless/cityless young man who chose to move to Sparta because he was impressed by the Spartans' military & physical prowess. The urge to emulate the Spartans came mainly from his bitter experiences after the enemies ravaged his city-state and drove him (along with his pretty cousin and crippled tutor/slave) from his home.

Mr. Pressfield cleverly weave the story to bring us closer to the Greek society of that time, in particular the Spartans. The battle scenes were evocative and quite detailed, while the background story which took place in the Spartan home country provide us with a descriptive and informative views on the Spartan philosophy, way of life and history.

Mr. Pressfield was quite balanced in depicting both the Greeks and the Persians. He presented the Persians (the antagonists of the story) as remarkable and honorable warriors, and Xerxes I as a good military commander, and not a bloodthirsty monster.

Overall, this is an entertaining and informative book, a good balance especially for you who first hear about the Battle of Thermopylae from the movie or comics 300!

Pressfield presents the story of the Battle of Thermopylae, in which a small contingent of Spartans and their few allies made a brave, desperate stand against a huge force led by the conquering Persians. I love history but you don?t have to love history to love this book ? it?s as much about life, and people, as it is about war. Each character is as important as the battle (and man, does Pressfield put you right in the scene ? you?ll feel like showering after his nitty gritty presentation of each skirmish). The book touches upon all the important stuff of life: friendship, love, and the question of what?s worth fighting for. Pressfield respectfully acknowledges a debt to Mary Renault, and while it would be hard to find any author with her towering talent, I believe Ms. Renault would?ve enjoyed this book tremendously.