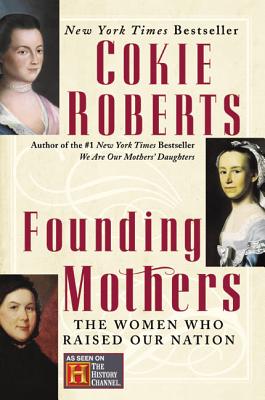 Founding Mothers: The Women Who Raised Our Nation

Drawing upon personal correspondence, private journals, and even favored recipes, Roberts reveals the often surprising stories of the fascinating women--such as Abigail Adams, Eliza Pinckney, and Deborah Read Franklin--who fought the Revolution as valiantly as the men. Read More

Drawing upon personal correspondence, private journals, and even favored recipes, Roberts reveals the often surprising stories of the fascinating women--such as Abigail Adams, Eliza Pinckney, and Deborah Read Franklin--who fought the Revolution as valiantly as the men. Read Less

All Editions of Founding Mothers: The Women Who Raised Our Nation

Ladies of Liberty: The Women Who Shaped Our Nation

We Are Our Mothers' Daughters

We Are Our Mothers' Daughters

One of the Best History Books

How do I value Cokie Robert's Founding Mothers - The Women Who Raised Our Nation? Let me count the ways. Foremost, we gain a robust understanding of the personal sacrifice the founding families - the wives as much as the husbands - made in order to create this nation. The important message for contemporary readers is that this country exists only because of their personal sacrifices. Those overwhelming personal sacrifices stand in stark contrast to the preeminent self-interest of Washington 'leaders' and legislators today. How many of our current crop of self-professed 'patriots' would risk their family unity, personal wealth, and very lives to defend their professed ideals? Anyone? What is missing from our union is leaders with a national vision that transcends personal power, re-election at any cost, and party politics.

Our school books focused on Founding Fathers and various key battles in the fight for independence from British control as if that were a remotely accurate picture of the times and its challenges. What those texts never addressed was the impact on the wives and children and on personal finances. Wives separated from husbands for years; Abigail Adams and Martha Washington suffering almost continual separation from their husbands with the ancillary benefit that they avoided the continual pregnancies (no birth control in 1748) that drained other women and led to the early death of many.

Secondly, the founding wives assumed the huge responsibility of family income production by running the farms and plantations, albeit with slave labor in many cases. This by women who had no formal education in science, math or economics. Indeed, we learn that Abigail Adams was a continual proponent of education for girls, repeatedly writing husband John Adams and urging him to somehow incorporate female education into foundational documents.

Third, during the British occupations of both Boston and Philadelphia, founding wives actually became refugees driven from their homes by hostile British troops. They sought refuge with relatives or friends who lived in more secure areas. The wives of more prominent leaders feared kidnap by the British, while all feared rape and mayhem. Indeed, after temporary exile, many returned to homes ravaged and destroyed by British occupation. For the founding wives who had more frequent contact with their husbands, this dislocation and refugee status was even harder because they were often pregnant and had many young children to care for. It was interesting to learn that the war of independence halted every winter and troops hunkered down. Martha Washington consistently wintered with George and did what she could to cheer the troops; in spring when warfare revived, she returned home to supervise the next growing season and care for displaced friends and relatives. She was not alone in her annual migrations.

Fourth, we learn how long the Revolutionary War ground on without decisive battlefield victory for either side, without immediate material help from French allies, and without a peace treaty. The dreary war reminded me of the seemingly endless wars in Afghanistan and Iraq we currently face. Cokie Roberts' account of war on American soil gave me a tiny glimmer of understanding of what the people of the Middle East face today under U.S. occupation of their cities, villages and farms. Perhaps if we'd read Founding Mothers in school and learned the true cost of our war of independence, we'd be less cavalier about invading other countries.

This remarkable book was so readable because the key events in gaining independence and creating this country created an intrinsic momentum structure on which more domestic details could ride. For this reader that faltered only after the Constitution was ratified and the temporal march halted. Still, one of the best history books I've ever read. Kudos to Cokie Roberts.

Yawning with the Founding Mothers

I am a huge fan of Cokie Roberts, so I had high hopes for this book. It's dry as dirt and hard to follow in spots. It reminded me of my high school history texts. You might glean some interesting facts, but you'll have to work to get there.

It is always interesting to learn about our former Presidents. This book gives us insight to their early lives and family situations.

I had seen this book many times, and finally decided to order it and read it. This book is so wonderful and gives fantastic insights to the lives of these very special women and how they molded our nation. This book is well worth the time spent in reading it. I am a fast reader and I was done with this book in a day and a half. Normally, I won't reread a book, but this one is a keeper.