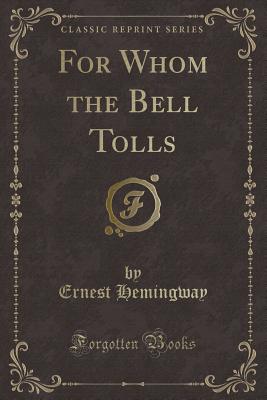 Inspired by his experiences as a reporter during the Spanish Civil War, Ernest Hemingway's For Whom the Bell Tolls tells the story of Robert Jordan, an American volunteer in the International Brigades fighting to defend the Spanish Republic against Franco. After being ordered to work with guerrilla fighters to destroy a bridge, Jordan finds himself falling in love with a young Spanish woman and clashing with the guerrilla leader over the risks of their mission. One of the great novels of the twentieth century, For Whom the ... Read More

Inspired by his experiences as a reporter during the Spanish Civil War, Ernest Hemingway's For Whom the Bell Tolls tells the story of Robert Jordan, an American volunteer in the International Brigades fighting to defend the Spanish Republic against Franco. After being ordered to work with guerrilla fighters to destroy a bridge, Jordan finds himself falling in love with a young Spanish woman and clashing with the guerrilla leader over the risks of their mission. One of the great novels of the twentieth century, For Whom the Bell Tolls was first published in 1940. It powerfully explores the brutality of war, the loss of innocence and the value of human life. This stunning edition features an afterword by Ned Halley. Designed to appeal to the book lover, the Macmillan Collector's Library is a series of beautiful gift editions of much loved classic titles. Macmillan Collector's Library are books to love and treasure. Read Less

All Editions of For Whom the Bell Tolls

A Moveable Feast: The Restored Edition

Hemingway's novel "For Whom the Bell Tolls" (1940) is toughly realistic in its depiction of the butchery of warfare. The book has the no-nonsense, fact-intensive style of a reporter. Yet, in its themes of love, death, heroism, and human brotherhood, Hemingway's novel is, in spite of itself, romantic in outlook, but romantic with an edge.

The novel is set in Spain in 1937 during the Spanish Civil War (1936-1939). The Spanish Civil War was a multi-sided conflict between the democratically-elected government, the Republicans or loyalists, and its right-wing anti-communist opponents, the nationalists (fascists). The Republicans during this conflict had the assistance of the USSR. Their enemies, the nationalists, were assisted by Nazi Germany and by Italy. Hemingway was a correspondent in Spain at the time. His novel tells the story of Robert Jordan, a young American instructor in Spanish at the University of Montana who had earlier spent much time wandering through Spain. In 1936, with the outset of the conflict, Jordan volunteered his services to assist the Republicans and became an expert in explosives. Jordan idealizes his grandfather who had been a hero in the American Civil War. Jordan's father had committed suicide. When the novel opens, Jordan is assigned to destroy a bridge in furtherance of a Republican offensive. He works with a group of guerrillas in the mountains.

The story unfolds over a time of three days. Hemingway's book offers portrayals of a group of Jordan's Spanish compatriots, in addition to Jordan himself. Chief among them is a 48-year old woman, Pilar, physically unattractive, earthy, and strong-willed. She is the de facto leader of her group and is as central to the story as is Jordan. Pilar is the "woman" of Pablo, who was once a formidable fighter but who has become disillusioned by the conflict. The novel includes several scenes of high tension and near violence between Jordan and Pablo. In his efforts to blow-up the bridge, Jordan is assisted by Anselmo, an aged man who despairs of violence and killing but is devoted to the Republican cause. And, in the three days of the novel, Jordan meets and has a passionate love affair with Maria, a lovely 19-year old who has been saved from the nationalists by Pablo.

Hemingway is known for a terse, elliptical writing style, and it is on display in this book. But the writing is highly varied, with long stream of conscious digressions by Jordan as he reflects upon his past life and upon the conflict in which he has thrust himself. Much of the writing is both figurative and digressive. Hemingway tried to transcribe much of Spanish idiom directly into English, particularly the use of "thou" for the intimate Spanish "you." He also makes considerable use of untranslated Spanish phrases. The book captures the speech patterns of soldiers under tension, with much use of colorful language. Hemingway does not reproduce this language directly but, in English, uses phrases such as "obscenity" or "unprintable" in place of the words themselves. In addition to telling the story of the bridge and its destruction, all the characters engage in long discussions of their thoughts and their prior lives. These discussions generally are directed to the brutality of the war. In an outstanding passage, Pilar tells of the destruction under the command of Pablo of a group of fascist leaders who are forced to run the gauntlet before being thrown down a cliff.

Hemingway was in love with Spain, both for its beauty and its brutality. The novel has many discussions of bullfighting, largely told by Pilar as she recounts her experiences with earlier lovers. Pilar also has a power of clairvoyance in the story, especially as it relates to impending death. The book includes several vivid battle scenes. One of these scenes tells of the gunning-down by aircraft of a group of five of the guerillas assisting Jordan at the top of a small hill.(Aircraft has a large and fearsome presence in the book.) Another effective battle scene tells of the difficult destruction of the bridge and its aftermath.

The love relationship between Robert Jordan and Maria comes to dominate the novel. The two become passionately attracted to each other and quickly consummate their relationship. The passages describing the couple's lovemaking are central to the story and effective. The inhumanity of war is juxtaposed against human commitment and the beauty of the everyday. Robert Jordan realizes that he is in love with Maria, Spain, and with life. This love, in the book, reaches its peak in heroism and self-sacrifice. Jordan comes to realize what in life he values. It is because of his realization, that he ultimately must give up the things he comes to cherish. Within its language of toughness and machismo, this novel has the theme of inevitability and of romantic tragedy.

This is a book I read in high school many years ago when it was far beyond me. It is not an easy book, and not every part of it is successful. But it is an extraordinary novel. I am grateful that I had the opportunity to revisit the book when I was able to try to appreciate it.

For whom the bell tolls is not only a great song, but a wonderful novel. It portrays a little-known war in the US, and it has Hemingway's typical style that is refreshingly simple and prose-oriented. It is a great read- you won't be able to put it down!