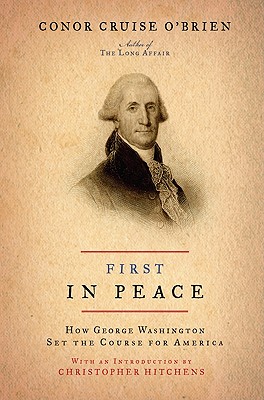 First in Peace: How George Washington Set the Course for America

The Social Contract and the First and Second Discourses

The Siege: The Saga of Israel and Zionism

The Long Affair: Thomas Jefferson and the French Revolution, 1785-1800

News of the World

A Sovereign People: The Crises of the 1790s and the Birth of American Nationalism

By the Hand of Providence: How Faith Shaped the American Revolution

The Basics of American Politics

George Washington And The French Revolution

I found Cruise O'Brien's last book, "First in Peace" (2009) in the process of searching for something to read in celebration of Presidents' Day. The late Conor Cruise O'Brien (1917 - 2008) was an Irish diplomat and politician and an international scholar. O'Brien wrote about, among other things, Irish politics, the State of Israel, the French Revolution, early American history, and Edmund Burke. Although known for his left wing views, which he modified late in life, O'Brien was a great admirer of Edmund Burke. In this unusual combination, (political liberalism and Burkean conservatism) O'Brien was similar to the American legal scholar, Alexander Bickel.

In "First in Peace", O'Brien examines the presidency of Washington to explore, as the book's subtitle indicates, "how George Washington set the course for America." A further "publisher's note" explains that the book endeavors to show the "art of subtle, magnanimous, and wide-resonating statecraft practiced by a president at a tender moment in America's history, especially in relationship to the rest of the world." The book in part is a continuation of an earlier work of O'Brien's, "The Long Affair" (1986) which was a highly critical examination of the presidency of Thomas Jefferson.

O'Brien's book is in two short chapters, one for each of Washington's terms as president. Although American domestic issues, including the establishment of the Bank of the United States and the Whiskey Rebellion, receive some attention, the focus of the study is on foreign affairs. In particular, O'Brien explores President Washington's reaction to the French Revolution and to the attendant turmoil in Europe. In the book, Jefferson, as Washington's Secretary of State, and his followers appear as the foil to the statecraft and moderation practiced by Washington and his Secretary of the Treasury, Alexander Hamilton.

The book's discussion of Washington's first term begins with a private letter of Washington, written in October, 1789, in which the president expressed his concern with the then-recent French Revolution. Washington predicted that its ideological excess would lead in the end to lawlessness, violence, and militarism. With his concern with events in France, Washington began secret overtures to Britain early in his administration before appointing Thomas Jefferson as his Secretary of State. Washington appointed Jefferson to his cabinet to include a spectrum of opinions; but from the beginning, O'Brien argues, Washington paid little attention to him. Jefferson was a fiery supporter of the French Revolution and became Secretary of State without knowledge of the covert negotiations for closeness to Britain that Washington had already initiated. O'Brien argues that Washington never had any confidence in Jefferson's foreign policy expertise or opinions. Instead, Washington relied upon his own judgment in foreign affairs, as reinforced by the advice of Treasury Secretary Hamilton. Hamilton is given great stature in O'Brien's account for his domestic and foreign policy roles in the Washington administration. By contrast, Jefferson is shown as attempting to undermine Washington's efforts for political and ideological purposes.

O'Brien's discussion of Washington's second term begins with the presidential proclamation of neutrality followed by what has become known as the "Genet affair". The French minister to the United States, Edmond-Charles Genet, attempted to circumvent diplomatic channels and to foment support for an alliance with Revolutionary France among the American people. Genet also commissioned French privateers from American shores. O'Brien provides documents that show that Genet was following orders from the French Directory in these matters rather than acting alone, as is sometimes assumed. Washington ordered the French government to recall Genet and Jefferson resigned as Secretary of State shortly thereafter. O'Brien tries to find duplicity in Jefferson's attitudes with respect to Genet.

The discussion of the Genet affair is followed by a treatment of Washington's suppression of the Whiskey Rebellion and of the president's attendant discrediting of political societies. These societies were supporting a closer alliance between the United States and France. O'Brien further considers the controversial treaty with Britain negotiated by Chief Justice John Jay which was narrowly ratified in face of widespread disapproval. The theme of the book is that Washington's prudence and judgment in foreign affairs, spared the United States from a ruinous alliance with France and from the excesses of the Revolution. Washington truly was "First in Peace" and a model for subsequent American statesmen.

O'Brien offers a worthwhile if abbreviated account of Washington's presidency. I suspect it might have been expanded upon if O'Brien had lived. Readers familiar with the literature on Washington's presidency will be aware that scholars have disagreed about the relative roles of Washington, Hamilton, and Jefferson. O'Brien captures the independent, deliberative, and reflective character of Washington's judgments together with Washington's high regard for Hamilton. Jefferson comes across badly. The focus of the book is on the dangers that France posed to the new American Republic. The dangers emanating from British seizures of American ships and other belligerent actions receive little mention in O'Brien's study. Thus, O'Brien tends to minimize the reasons underlying the widespread dissatisfaction in the United States with Jay's treaty. Similarly, O'Brien may move too quickly to support what other writers have seen as suppression of dissent during Washington's second term. And the book presupposes a lengthy explanation of how the French Revolution differed from the earlier American Revolution. Discussion of this subject would have been appropriate and welcome.

With these questions, O'Brien's book remains a thoughtful, provocative book on the Washington presidency. It explains why our first president is deservedly held in high esteem and thus was an appropriate book to read and consider for Presidents' Day. The book will be of most interest to readers who have some background in the issues of Washington's presidency and with the turbulent early years of the United States.