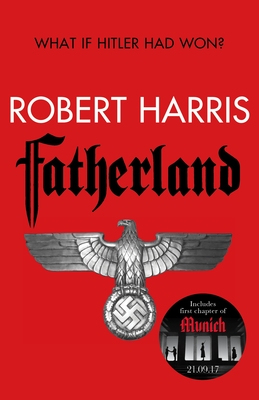 _________________________ 'The highest form of thriller . . . non-stop excitement' The Times NOW AVAILABLE: THE SECOND SLEEP, ROBERT HARRIS'S LATEST NOVEL _________________________ What if Hitler had won the war? It is April 1964 and one week before Hitler's 75th birthday. Xavier March, a detective of the Kriminalpolizei, is called out to investigate the discovery of a dead body in a lake near Berlin's most prestigious suburb. As March discovers the identity of the body, he uncovers signs of a conspiracy that could go to the very top of the German Reich. And, with the Gestapo just one step behind, March, together with an American journalist, is caught up in a race to discover and reveal the truth - a truth that has already killed, a truth that could topple governments, a truth that will change history. Read Less

All Editions of Fatherland

Imperium: A Novel of Ancient Rome

The Man in the High Castle

A mediocre crime novel. Reminds me of the Shell Scott novels that I read in my youth.

An alternate history, this story is set in the years after the Germans strike a peace with all but the Soviets. A killer is on the loose in Berlin and he may be one of the infamous Nazi leaders...a real page turner as the detective Xavier March, an investigator working for the Kriminalpolizei (investigates the suspicious death of a high-ranking Nazi. Along the way we discover the Gestapo is eliminating the remaining officials who planned the Holocaust. The final scene takes place at the now unmarked site of Auschwitz's completely dismantled extermination camp.

What if Hitler won?

I'd seen Fatherland around for years. It's hard to miss, what with the giant swastika on the cover. In fact, reading the book creates its own mini social experiment, watching others see the awful symbol on your book cover (which may or may not be the same as mine), and their subsequent reaction. (One older man on the subway, perhaps insane, perhaps not, demanded to know whether it was a novel or not and then tried to start up a conversation with me about the evils of nationalism vs. patriotism.)

In either event, there are things about Fatherland that are "typical" thriller mystery elements. A policeman (Xavier March) investigates a body found in a lake near a wealthy neighborhood, and in doing his job, uncovers a decades-long secret that touches across powerful men everywhere. It's well told and a decent plot, but it's made all the more interesting by the major twist that is the overall conceit of Fatherland.

That is, the book takes place in 1964 Germany after the Germans WON World War II. This is the premise, and it's unnerving how little needs to be different in that world to make it plausible. A few references to Hitler attacking Russia in the summer, and other details left unsaid, set the stage. The German population, including March, have been told that the Jews were "relocated to the East" and understand that follow-up questions to that are not allowed. Author Thomas Harris does a good job of showing the police state mentality, and how easy it is for them to dispose of people who do not fit into their agenda. It is appropriately scary, and Harris does a great job of delivering a message without beating you over the head with it. After all, there aren't many - scratch that, there aren't ANY reasonable people who need to be told why Hitler's defeat was a good thing.

At the end of the day, Fatherland is a good thriller that sets itself apart from others in its category by the setting and surroundings. It's well worth the read.