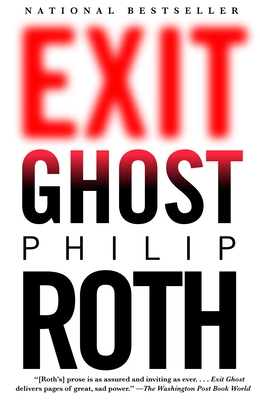 Like Rip Van Winkle returning to his hometown to find that all has changed, Nathan Zuckerman comes back to New York, the city he left eleven years before. Alone on his New England mountain, Zuckerman has been nothing but a writer: no voices, no media, no terrorist threats, no women, no news, no tasks other than his work and the enduring of old age. Walking the streets like a revenant, he quickly makes three connections that explode his carefully protected solitude. One is with a young couple with whom, in a rash moment, he ... Read More

Like Rip Van Winkle returning to his hometown to find that all has changed, Nathan Zuckerman comes back to New York, the city he left eleven years before. Alone on his New England mountain, Zuckerman has been nothing but a writer: no voices, no media, no terrorist threats, no women, no news, no tasks other than his work and the enduring of old age. Walking the streets like a revenant, he quickly makes three connections that explode his carefully protected solitude. One is with a young couple with whom, in a rash moment, he offers to swap homes. They will flee post-9/11 Manhattan for his country refuge, and he will return to city life. But from the time he meets them, Zuckerman also wants to swap his solitude for the erotic challenge of the young woman, Jaime, whose allure draws him back to all that he thought he had left behind: intimacy, the vibrant play of heart and body. The second connection is with a figure from Zuckerman's youth, Amy Bellette, companion and muse to Zuckerman's first literary hero, E.I. Lonoff. The once irresistible Amy is now an old woman depleted by illness, guarding the memory of that grandly austere American writer who showed Nathan the solitary path to a writing vocation. The third connection is with Lonoff's would-be biographer, a young literary hound who will do and say nearly anything to get to Lonoff's "great secret". Suddenly involved, as he never wanted or intended to be involved again, with love, mourning, desire, and animosity, Zuckerman plays out an interior drama of vivid and poignant possibilities. Haunted by Roth's earlier works - the melancholy comedy of "The Ghost Writer", the counterpoint of the imaginary and the real in "The Counterlife", the distinctive dialogues of "Deception" - "Exit Ghost" is a reminder of Roth's incomparable style and themes and an amazing leap into yet another phase in this great writer's insatiable commitment to fiction. Read Less

All Editions of Exit Ghost

Set in Manhattan in 2004, Philip Roth's novel "Exit Ghost" (2007) is a product of the writer's old age which plays tantalizingly with both biography and autobiography. The book is a story of the nature of fiction and creative writing and of the vicissitudes of aging.

The novel's voice is that of Roth's frequently-used character, the author Nathan Zuckerman. At the age of 71 Zuckerman has left his 11-year home in a remote community in the Berkshire mountains of Massachusetts for a trip to his former home of New York City. Zuckerman has become a solitary, especially after the events of September 11, 2001. He has few friends, sees few people, does not follow current events, and is devoted solely to his writing and to rereading books he enjoyed in his youth. Zuckerman decides to travel to New York in hopes for a surgical cure to the incontinence which has plagued him following surgery for prostate cancer some years earlier. The surgery also left the once virile Zuckerman impotent, a circumstance for which their appears to be no cure.

The Berkshires were also home to the great American novelists, Hawthorne and Melville, as Zuckerman is aware, and to a fictitious short story writer that becomes an important character in this book, E.I. Lonoff. Lonoff is described as a mentor of Zuckerman who offered the fledgling writer encouragement in the mid-1950s. The young Zuckerman was visiting Lonoff when the older writer's wife of 35 years walked out on him because Lonoff was romantically involved with a young woman named Amy Bellette who also was present during the night that saw the effective end of Lonoff's marriage.

When Zuckerman reports to the Manhattan hospital, he has a passing encounter with Amy Bellette, Lonoff's former lover, who is now 75 years old and disfigured from brain cancer. Zuckermann begins to think again about Lonoff and about his own younger years. Then, on an impulse, Zuckerman responds to an ad in a literary magazine in which a young couple offer to swap their Manhattan apartment for one year in exchange for a rural home in New England. The couple placing the add are a pair of aspiring authors, Bill Davidoff and his wife Jamie Logan. The aging, impotent, and incontinent Zuckerman becomes instantly smitten with the young wife Jamie.

To complicate the story further, Jamie has an old Harvard friend, Richard Kliman, himself eager to make a literary name for himself. Kliman is writing a biography of the now-undeservedly forgotten writer, Lonoff, and he believes Zuckerman can help him. Jamie gives Kliman a lead to the unwilling Zuckerman which in turn leads Zuckerman back to Amy Bellette for their shared recollections of the great short story writer. Kliman wants to restore Lonoff's literary reputation, but he also believes he has uncovered a secret in Lonoff's personal life: an affair that the writer had beginning at the age of 14 and continuing to the age of 17 with his half-sister.

As the tangled story develops, Zuckerman must deal with his passionate but futile feelings for Jamie and with his desire to prevent Kliman from publishing what Zuckerman believes to be questionable and scurrilous information about his former literary mentor. As a writer will do, Zuckerman takes his few brief, cryptic encounters with Jamie during his stay in New York and blows them up in his imagination. Zuckerman writes for his own edification a short play consisting of fictitious versions of dialogue between Jamie and himself that he titles "He and She." From a literary standpoint, "He and She" is awful.

There are a several levels to this book. We have the author, Roth, telling a story in the words of what may be his thinly-disguised alter ego, Zuckerman. Zuckerman becomes irate when he learns a literary hero of his, Lonoff, is about to become the subject of a biography exposing sordid details of the writer's early life. The Lonoff story seems to warn the reader about taking the Zukerman story too closely as a biography of the aging Roth while at the same time it suggests the connection. And again, in writing the fictitious play "He and She" Zuckerman takes his own infatuation with the beautiful and articulate young Jamie Logan to a level of reality that it does not possess in what Zuckerman tells the reader in fact transpires between Jamie and himself. In the meanwhile, Zuckerman shows himself as troubled by impending loss of memory, possible senility, his continued and hopeless sexual impotence, and ultimately by death. After a long meditation on the death of a friend, George Plimpton, Zuckerman observes:
"[h]e died, as we all do: as a rank amateur." (p.264)

Roth's book is about the nature of literature and how it captures reality in a manner different from and deeper than mere factual reportage. The book is full of literary allusions in addition to the allusion to the fictitious writer Lonoff. The primary literary reference is to Joseph Conrad's late novel "The Shadow Line" with its references to coming to terms with age and maturity and perhaps to ghosts as well. (One of the references to "ghosts" in the novel uses the figure in terms of lost sexuality, as in Zuckerman's feeling for Jamie as the "ghost of my desire", p. 66). Other literary allusions in the book include T.S. Elliott, E.E. Cummings, Hemingway, Bellow,, Faulkner, Chekov,, Keats, and Hawthorne and Melville. This book is less successful than many of Roth's other books, probably due to the contrived plotting and to the weaknesses of the "He and She" segments. But it remains a thoughtful, ironic exploration of the nature of literature and of growing old.