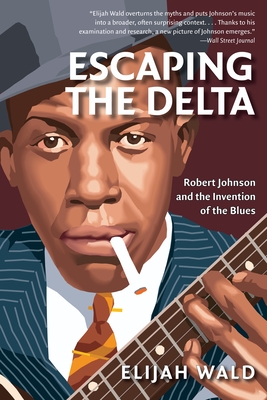 Escaping the Delta: Robert Johnson and the Invention of the Blues

What the Beatles are to rock and roll, Robert Johnson is to the blues--this title offers both a portrait of the man and his times as well as a fresh critique of the music he made. Read More

What the Beatles are to rock and roll, Robert Johnson is to the blues--this title offers both a portrait of the man and his times as well as a fresh critique of the music he made. Read Less

All Editions of Escaping the Delta: Robert Johnson and the Invention of the Blues

The Blues: A Very Short Introduction

Talking 'Bout Your Mama: The Dozens, Snaps, and the Deep Roots of Rap

The Story of the Blues

The Land Where the Blues Began

Moanin' at Midnight: The Life and Times of Howlin' Wolf

Blues All Around Me: The Autobiography of B. B. King

by B B King

Deep Blues: A Musical and Cultural History of the Mississippi Delta

The Blues And Romantic History

Many Americans have shown a great interest in "roots" music as part of a highly commendable effort to understand our country's life and culture. Much of this interest has, over the years, focused on the blues of the Mississippi Delta and, in particular, on the recordings of singer and guitarist Robert Johnson (1911 -1938). Johnson was an obscure figure in his day and his life and music remain the stuff of legend. He had two recording dates in 1936 and 1937. His music was rediscovered in the 1960s and since that time the sales of his collected recordings have numbered in the millions.

In "Escaping the Delta: Robert Johnson and the Invention of the Blues" (2004), Elijah Wald offers a compelling study of the blues and of blues historiography focusing on Robert Johnson. Wald tries to correct what he deems to be the prevailing myths about Johnson: that he was a primitive folk artist caught in the Mississippi Delta who recorded and perfected a local traditional form of blues. Wald finds Johnson an ambitious young singer who had studied the blues forms popular in his day. Johnson, Wald argues, wanted to escape the Mississippi Delta and pattern himself on the urban blues singers, in particular Leroy Carr, emanating from the Midwest and Chicago.

Wald finds that Johnson displayed a variety of blues styles in his recordings and that he was largely ignored by black music listeners of his day because Johnson's early efforts to capture an urban blues style were basically copies of more successful singers and because his songs in the Delta blues style lacked appeal to the urban and sophisticated black audience of the time.
Johnson's music only became well-known, Wald argues, with the rise of English rock, and with his rediscovery by a largely white audience. The tastes of black music listeners had moved in a mostly different direction towards soul, funk, rap, disco and did not encompass rural blues singers. The fascination of modern listeners with Johnson, according to Wald, is due to a romantic spirit -- a boredom with the life of the everyday -- and a search for a past full of authentic individuals who knew their own wants and needs and who projected themselves in their art.

Wald's book begins with a history of the blues before Robert Johnson focusing on the commercial character the music had at the outset. He gives a great deal of attention to the Blues queens -- Bessie Smith and Ma Rainey -- and to their smooth-voiced male successors, particularly Leroy Carr, as mentioned above, and Lonnie Johnson. These singers profoundly influenced Johnson's music and his ambitions to become a popular entertainer and not a cult figure.

The central part of Wald's book consists of a brief biography of Johnson -- summarizing the various speculations on his life -- and of a song-by-song discussion of his recordings. In this discussion, Wald discusses the music with a great deal of intelligence and understanding. He shows very clearly Johnson's debts to his more commercially successful predecessors and explains as well the variety of blues styles Johnson encompassed in his songs.

The final portion of the book carries the story of the blues forward beyond Robert Johnson's death. It shows how the music at first evolved into a combo style, again approaching popular music, which took blues into a different direction from Johnson's recordings. The book concludes with a discussion of Johnson's rediscovery, and the discovery of other Delta blues singers, beginning in the 1960's.

Wald clearly knows his material. For all his criticism of the mythmaking cult over Johnson, Wald's love for this music shines through, as he is the first to admit. Upon reading this book, I spent considerable time rehearing Johnson's music and felt I came away with a better understanding and appreciation of it than I had before. The goal of every book about music should be to encourage its readers to return to (or get to know) the songs, or what have you, themselves. The book meets this goal admirably.

There are few books on the blues that manage to be both scholarly, critical, and inspiring and Wald's book is one of these few. I do not find Wald's thesis as unusual as he claims it to be, but it certainly will be worth exploring by listeners and readers who do not have a large background in this music.

In music, a fair and careful historical account will in the long run perform a greater service to the music and the artists than will legends and stereotypes. The Delta singers discussed in this book, Robert Johnson, Son House, Skip James, Charley Patton, were musicians of talent. Understanding their story can only increase the listener's appreciation of the blues.