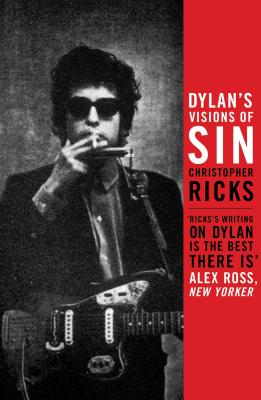 All Editions of Dylan's Visions of Sin

The Poems of T. S. Eliot, 1: Collected and Uncollected Poems

The Force of Poetry

No Direction Home: The Life and Music of Bob Dylan

Down the Highway: The Life of Bob Dylan

Bob Dylan: Behind the Shades Revisited

Explicating Bob Dylan's lyrics has become a cottage industry. Christopher Ricks, an Oxford Professor of Poetry, certainly has the credentials to submit the songwriter's lyrics to that sort of close reading. In Dylan's Visions of Sin, Prof. Ricks frames the lyrics in terms of sins, virtues and graces, submitting them to a kind of laser scrutiny, including one-word concordances between the song lyrics and poems by the likes of Milton and Tennyson. Elsewhere, he invokes John Donne and T.S. Eliot. Dylan's words merit critique, but except for a few brilliant readings, somehow Ricks' approach isn't very edifying for a number of reasons.

By its very nature, Dylan's art is hybrid and impure. His lyrics aren't intended for the page and when you read them that way it's clear. The tone is flat. They cannot be read metrically. They are bereft of the nuances the singer suggests in his phrasing, his lonesome voice wailing like a freight train in the vast Midwestern night.

Simply put, the words are meant to be sung. This reviewer shares with Richard Goldstein the minority view about his vocals: "Dylan's voice was a lot wider than anything I had ever heard. It had peaks and recesses, and great dark groves of manzanita where the tonsils might have been." In addition, the singer's phrasing gives the words an unpredictable twist in its careening swoops, abrupt turns, rises and falls, high, keening wails. Listen to how Dylan's emphasis and inflection falls on certain words ("success," for example); his phrasing yields ambiguities, sensuous pleasures, and double entrendres that cannot be found on the page. The singer employs many voices, altering and evolving his instrument's sound to embody each album's specific concept or mood.

Further, Dylan's language cannot be separated from the music that accompanies them, and the music itself is hybrid: English folk ballads, the blues, country, rockabilly, Chuck Berry, "sea chanteys, drinking songs, tall tales, and early rock and roll," as Greil Marcus observed in his Basement Tapes liner notes. On "Blonde on Blonde," the carnivalesque music is wholly wedded to "Visions of Johanna's" vast Goyaesque cityscapes. Elsewhere, the album's music sounds equally as hilarious, joyous, boozy, sleazy or affecting as the lyrics themselves or else it serves as bouncy rejoinder to a nightmarish narrative; "Stuck inside of Mobile with the Memphis Blues Again," for instance, is filled with the spaced-out displacement of dreams.

The lyrics invite analysis, but Goldstein writes, "There was a deft opacity to Dylan's work which functioned as a kind of counterpoint, adding a tension of denial to whatever he said, so that you could never really commit yourself to an interpretation without feeling like a fool." That is, the songwriter employed surrealist technique which joins unlikely opposites and contrasts. "The charge [of surrealist art]," contends Norman Mailer, "comes more from sound than from meaning." The words both invite and deny meaning. However, it should also be said, as Goldstein noted, that "Pop music has been a first sphere of cultural authority, a testing ground for ideas and attitudes which later reflect themselves in behavior." Time itself has granted the songs a certain transparency.

In "Ballad of a Thin Man," Dylan sings, "You should be made to wear earphones." While it's obvious that the songwriter is familiar with the work of poets such as Arthur Rimbaud, Eliot, and Allen Ginsberg--the songwriter's "the ghost of electricity howls in the bones of her face" and Ginsberg's "the machinery of other skeletons," to take but one example--in the end, any serious assessment of Bob Dylan's art of song cannot be made apart from the singer's voice and the music that accompanies the words. All are inseparable.