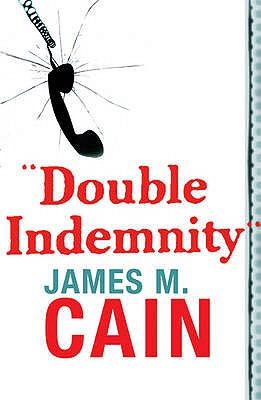 A true crime masterpiece, and highly acclaimed 1940s movie 'DOUBLE INDEMNITY is among the finest of all American novels, regardless of genre or style' LA TIMES 'Cain is the master' Tom Wolfe DOUBLE INDEMNITY is the classic tale of an evil woman motivated by greed who corrupts a weak man motivated by lust. Walter Huff is an insurance investigator like any other until the day he meets the beautiful and dangerous Phyllis Nirdlinger and falls under her spell. Together they plot to kill her husband and split the insurance. It'll ... Read More

A true crime masterpiece, and highly acclaimed 1940s movie 'DOUBLE INDEMNITY is among the finest of all American novels, regardless of genre or style' LA TIMES 'Cain is the master' Tom Wolfe DOUBLE INDEMNITY is the classic tale of an evil woman motivated by greed who corrupts a weak man motivated by lust. Walter Huff is an insurance investigator like any other until the day he meets the beautiful and dangerous Phyllis Nirdlinger and falls under her spell. Together they plot to kill her husband and split the insurance. It'll be the perfect murder . . . Read Less

2005, Orion (an Imprint of The Orion Publishing Group Ltd ), London

2002, Orion (an Imprint of The Orion Publishing Group Ltd ), London

All Editions of Double Indemnity

Although not published in book form until 1943, James M. Cain (1892 -1977) wrote "Double Indemnity" in 1936, just after his other short masterful noir novel "The Postman Always Rings Twice" (1934) Both these novels became celebrated movies. I read the books together to try to get some understanding of Cain's art and of the noir genre.

As is Cain's earlier book, "Double Indemnity" is set in Los Angeles in the 1930s and is a tale of violence and murder heavily influenced by sex. Both books are told in the first person by a perpetrator of the crimes nearing the end of his life. The men in both books are seduced by a femme fatale who wishes to be rid of a husband.

There are differences in the books. The "Postman Always Rings Twice" involves people at the lower reaches of society, a wandering, penniless drifter together with a young frustrated woman married to an older man, "the Greek", who operates a run-down gas station and restaurant. The supporting characters also are drawn from low life. The book has a strong sense of place. The descriptions of the shabbier sections of Los Angeles and its environs are as important to the book as its story of lust and murder.

In contrast, "Double Indemnity" is far more psychological and probes deeper into the inner lives of its characters. The sense of place is less important that it is in "Postman". Furthermore, "Double Indemnity" involves crime and lust among the middle and upper classes rather than by those on the margins. The main character and narrator, Walter Huff, age 34, is a modestly successful insurance salesman. His victim, Nirdlinger, is a successful oil and gas executive. The femme fatale is Nirdlinger's wife Phylis, in her early thirties. Phylis seduces Nirdlinger to sell her husband an accident insurance policy and to participate in murdering Nirdlinger. Because the policy pays a double indemnity for accidents occurring on a railroad, Huff and Phyllis stage a scenario under which Nirdlinger appears to lose his life in an accident on a passenger train.

Unlike "Postman", "Double Indemnity" has a subplot involving Nirdlinger's daughter from a previous marriage, Cora, age 19, and her boyfriend, Beniamino Sachetti, 26, a student working on his doctorate in chemistry. The book has strong themes of sexual jealousy as Sachetti appears to be involved both with Cora and with Cora's stepmother Phyllis. Huff too is motivated to the murder by his desire for Phyllis, but he develops an almost innocent love in the course of the story for Cora.

Insurance policies are important in "Postman" but even more so in this book, as Huff's company struggles to find a way out of paying the $50,000 double indemnity for Nirdlinger's apparent accident. The aging, jowly, shrewd and cynical claims adjuster, Keyes, finds a way of unravelling what appears to be a flawless crime.

The story is narrated in a taut, laconic style with moments of reflection from Huff as he comes to understand himself and his fate. I did not find Huff an innocent or unwilling participant in the actions described in the book. Rather, he is on the lookout for the main chance and takes the initiative from the outset in proposing and planning the murder of Nirdlinger. Early in the book, Cain gives Huff a long and revealing soliloquy in which he compares his life as an insurance agent with that of a roulette croupier. He says "I lie awake night thinking up tricks, so I'll be ready for them when they come at me. And then one night I think up a trick, and get to thinking I could crook the wheel myself if I could only put a plant out there to put down my bet. That's all. When I met Phyllis, I met my plant."

Huff also understands Phyllis early in their relationship. He quotes her: "There's something in me that loves Death. I think of myself as death, sometimes. in a scarlet shroud, floating through the night. I's so beautiful, then. And sad. And hungry to make the whole world happy, by taking them out where I am, into the night, away from all trouble, all unhappiness." As the novel unfolds, Huff learns that there were depths to Phylis' murderous, violent character of which he was unaware when the couple formed their plot to kill Nirdlinger.

The story unfolds with a great deal of tension and inner logic as the complex elements of the plots are pulled together. The book offers a tough-minded portrayal of the consequences of greed, hatred, and lust, but it offers a hint of the possibility of love as well.

I enjoyed getting to know both these early books of James Cain, "The Postman Always Rings Twice" and "Double Indemnity". Although sometimes patronized as "pulp" writing, these are serious, well-written novels worthy of a place in American literature.