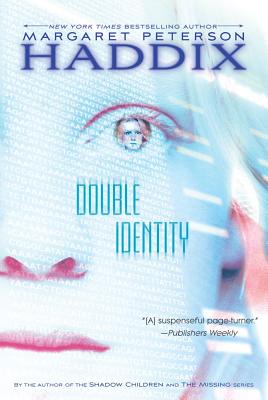 RThe author of "Escape from Memory" and the Shadow Children series has penned another suspenseful novel guaranteed to keep readers riveted.S--"Booklist." Read More

RThe author of "Escape from Memory" and the Shadow Children series has penned another suspenseful novel guaranteed to keep readers riveted.S--"Booklist." Read Less

All Editions of Double Identity

Running Out of Time

The House of the Scorpion

Bethany?s mom has been acting a little weird. Then for no reason she can see, her dad loads her and her mom into the car and they drive all night to another state where she is deposited with an aunt she didn?t know existed. Then her parents drive away into the night leaving her with the strange relative. Exceptionally strange to Bethany because up to now they didn?t even want her going on sleepovers at her friend?s houses. Bethany?s aunt, Myrlie seems a little strange because she keeps staring at Bethany. Then Bethany goes out into town and starts getting the same kind of weird reaction out of many of the town?s people. They say it?s because she looks just like her sister Elizabeth who died in a car accident 20 years ago.
But Bethany didn?t know she?d ever had a sister. She starts to research this sibling she?s never known and finds that they have many things in common. Too many things in common. In fact, people seem surprised when she doesn?t act just like Elizabeth. Thinking back, Bethany realizes that it?s been like this all her life, but she didn?t realize the pattern until she found out about her dead sister. So she digs around so more and finds out that her parents were involved in something ultra secret.
~Spoiler~
Bethany discovers that her parents cloned her from her dead sister Elizabeth. Her father was working for a man who wanted to be the first to clone a human being. They succeeded, but Bethany?s parents stole her and hid her away before she could be put in the news and the record books. The man in question (whose name I can?t remember, but he struck me as being based on the guy who owns Virgin everything) has found out about Bethany and he?s hunting her down. He spent a lot of money to get his clone and his name in the record books and he wants her.
~End Spoiler~
The story ends surprisingly satisfyingly. I say surprisingly because up until the last 10 pages it wasn?t looking good. It just seemed that between what Bethany wanted, what her parents wanted and the evil promoter nobody was going to be terribly happy in the end. Better yet, it all made sense. Not in an "ok, everybody?s happy now and everything is perfect" way, but in a believable way.