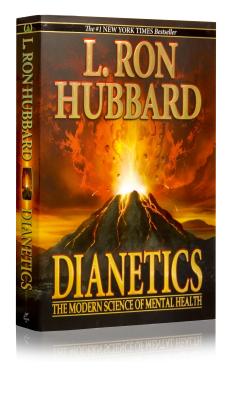 Albert Einstein said: We are using only 10% of our mental potential. Dianetics tells you how you can free a significantly larger part of your potential. Self confidence, harmonic relationships and a positive attitude towards life can absolutely be achieved. It makes Positive Thinking a reality. You can achieve your goals with more certainty if you are able to find the cause of upsets, unwanted reactions or emotions. The human mind is not a mysterious puzzle - impossible to resolve. Read and work with Dianetics, see how it ... Read More

Albert Einstein said: We are using only 10% of our mental potential. Dianetics tells you how you can free a significantly larger part of your potential. Self confidence, harmonic relationships and a positive attitude towards life can absolutely be achieved. It makes Positive Thinking a reality. You can achieve your goals with more certainty if you are able to find the cause of upsets, unwanted reactions or emotions. The human mind is not a mysterious puzzle - impossible to resolve. Read and work with Dianetics, see how it works for you and make up your own mind. The book gives a clear description of what is happening in the mind and explains a practical method, enabling you to explore your own subconscious, and rid yourself of what holds you down, resulting in increased IQ and well-being. Watching the DVD called 'How to Use Dianetics' along with the book is recommended to have a visual illustration of the concepts and the practical application. Read Less

All Editions of Dianetics: The Modern Science of Mental Health

The Way to Happiness

Battlefield Earth: A Saga of the Year 3000

Scientology: A New Slant on Life

Dianetics: The Evolution of a Science

Scientology: A New Slant on Life

Scientology: The Fundamentals of Thought

This book unfolds in such a way that you can easily track with Mr. Hubbard in his exploration of the human mind.

If you have evere wondered how you could be so upset over a silly (you fill in the blank here), this book explains it all.

The answers are here to questions such as "Why do I avoid certain things?" or "Where did these unexplained aches and pains come from?" or "Why am I crying?"

The answers are here in "Dianetics: The Modern Science of Mental Health".

I sincerely suggest you buy this book, get comfortable and take the adventure of your life!

This is a very well written book. It makes you think Dianetics is true. A little of it may be true but the majority is science fiction. This book is well worth $5 or $6, but I wouldn't spend anymore than that. And I defiantly wouldn't give anymore than that to "Scientology." Overall it's great science fiction writing and makes for some pretty good entertainment.

Obviously you want the 2008 edition.

What's new in this edition? Well, nothing! The publisher didn't change anything in the book itself other than typos and punctuation errors that were introduced by Hermitage House Publishers back in 1950. In comparing the original manuscript and putting those footnotes in the back of the book, enlarging and darkening the font size, it makes for a more comfortable read.

Dianetics is an alternative to psychology and outlines several basic things that can help a person help themselves (thus the phrase "self-help") as well as help others.

Among the chapters in this book we find the following: The Goal of Man; The Dynamic Principle of Existence; The Four Dynamics (a dynamic is a drive upon which life is compartmented); a descriptive graph of survival (which was interesting - I never knew survival was more than "just barely making it" until I read Hubbard's definition); and the discovery and complete anatomy of what Hubbard calls the "Reactive Mind", which commands one to act irrationally against their own wishes and goals. Since I have been known to act irrationally, it's good to see what's causing it and what to do about it.

It's a thick book, 491 pages of actual text, divided into Theory and Practical applications; a 5 page glossary of important terms; a chapter called Dianetics in the 21st Century that brings us up to date from those long-gone days of 1950 (the year Dianetics was published) which has reprints from the LA Star and The Daily News, which did news articles on Hubbard and Dianetics at that time. Lots of photos in this section, too.

It's interesting to see what their view was. And finally, an appendix that briefly lists other self-help books by Hubbard, which are all new 2008 editions!

Oh, and finally, finally, The Editor's Glossary, that gives dictionary definitions to English words as they were used in 1950 as well as specialized Dianetics terms, as they were used at that time of writing. This is real handy and makes reading the book that much more easily read.

It's tough for me not to write a long review on a book that is over 600 pages thick. It has every imaginable area of human relationships clearly delineated and how Dianetics can help problems associated with these: alcoholism, post partum depression, divorces, domestic violence and drug abuse amongst them.

So get this book but use Amazon's latest and greatest 2008 edition of the book, as I've described above. Remember, Dianetics is not Scientology and Dianetics is not a religion. It does not obligate anyone to just pick up a copy and read it. It is also in Tagalog, Spanish, French, German and a few other languages.

This book helped me in so many ways.
You have got to get it if you are depressed, sad, apathetic, angry, frustrated, scared, constantly sick, PTSD, or almost any other problem that is keeping you from doing what you want to do, being what you want to be or having what you want to have.
This is what the psychiatrists DON'T want us to know because it would put them out of business.

This book covers the founding concepts that are still included within the Scientology cult. It presents a lot of theory, but little actual fact for support. And because a lot of the terms used were created by the founder and science fiction writer L. Ron Hubbard, it can be difficult to read. Unless you're interested in researching the origins of Scientology thought processes, you might want to spend your money on a more modern introduction to the subject (this book was written in 1950). At least the modern books have more pictures, illustrations, and glossy covers.