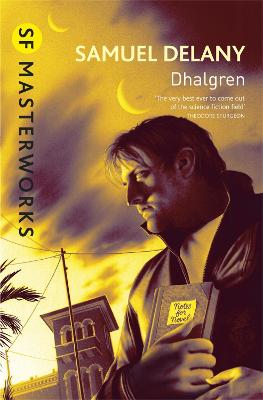 A young man arrives in the anarchic city of Bellona, in a near future USA. This world has two moons but could otherwise be our own. The man, known only as 'the Kid', begins to write a novel called Dhalgren that begins where it ends. Dhalgren is about the possibilites of fiction and about the special demands and pleasures of youth culture. Read More

A young man arrives in the anarchic city of Bellona, in a near future USA. This world has two moons but could otherwise be our own. The man, known only as 'the Kid', begins to write a novel called Dhalgren that begins where it ends. Dhalgren is about the possibilites of fiction and about the special demands and pleasures of youth culture. Read Less

All Editions of Dhalgren

This is a brilliant, beautifully written book, I read it in 2014. It is not dated (yet), nor nostalgic. It's still a profound vision of humanity, relationships, class, sexuality etc . . .

From the wildly differing reviews, it's obvious Dhalgren isn't for everybody. Although it is by a classic SF writer, this book marks the time when Delany ceases to confine himself to classic SF and uses his skill to explore other themes he is interested in, themes I'd guess are very personal to him - he does so with a vengeance. It's great an SF writer can branch out like this, to produce staggering pieces of fiction on a par or better than those in the literary sector. It makes the field of SF so strong in its diversity, though perhaps unpredictable for the reader. It's fun to have authors like PK Dick, AC Clarke, Olaf Stapledon at the core, but then you get other SF writers stretching that core like Heinlein, Doris Lessing, + individual books such as Stand on Zanzibar etc.

Once I start a book, I have to finish. I was put off by the reviews of Dhalgren. I didn't read it for years, ignored its call for decades; I was lead to believe the book would be a difficult tome and I'd feel chained to it. It got more daunting as I continually failed to pick it up. I can honestly say this is one of the easiest and most enjoyable books I have read. There is a poetic beginning to the book which lasts about ten pages; it's a bit like walking through a dark swamp. I think Delany does this because he wants you to emerge into the other world of Bellona as from a dream (and it works well - though I'm glad it wasn't longer than those few pages). Once you've got out of the dream swamp Delany is very explicit, you are in Bellona, the detail is incredible and there isn't a wasted word. I would definitely not want this book to be shorter (it's too fun being immersed in such a real alter-reality). [ . . . and that's why it's SF: because it is another reality.]

The dreaminess vanishes and you are welcomed to the cinders of Bellona, a US city where people are left to fend for themselves. That is basically what Delany wants to explore: how people would interact in a situation entirely cut off from our normal, structured routines, the drudgery of 9-5 work, matters of state, there is no money, somehow the shops replenish themselves . . . strange things happen, but that seems to be more on the periphery - of central concern are the dynamics between the characters, characters who are so alive.

So, Bellona's particular manifestation of Anarchy, an absence of endorsed rules or structures, forces a character to figure out how they fit and who they are - beyond just a name. The story follows amnesiac 'Kid', coming out of the dream not knowing who he is, remembering a bit of time in a psychiatric hospital and making his way through Bellona a journey of self discovery. It is as though Bellona's rubble mirrors Kid's character. [And then when Kid is less confused about who he is, it's time to leave. Bellona showing no promise of changing, will always be a wreck, with unpredictable extra moons . . .]

There are other things about the structure of the book, it's a circular novel, Kid picks up a book of poetry which he continues to write, and through which he might be constructing himself. I don't think you are supposed to fully understand it, again, it's part of the construct that enables Delany to explore a 'lost individual' and their process of becoming more whole. I hope I'm not making the book sound over-complicated: perhaps the structure is, there is definitely a brilliant mind behind it. Through the structure Delany is able to compare some radical life choices that are in opposition, a traditional family, untraditional family groupings where anything goes (!!!), a stable relationship, rival gangs . . . the sexuality in the book is described explicitly and it's ground-breaking for such a book (especially SF?). And we don't need to mention when it was written, it's still ground-breaking given it's context.

I am deliberately avoiding describing particular scenes as it detracts from the joy of discovering them, but they are ripe in this book, as is the humour. There are a couple laugh out loud bits. Then, it has to be mentioned, the sex in Dhalgren; it could no doubt inspire a dissertation. It's kind of amazing how Delany got away with it when it was published. Was I asleep? I didn't hear any controversy about this book (if I had, I would have read it sooner). Did the book avoid controversy simply because of its SF cloak? (Well done, if so.) One thing (amongst others) that saves the descriptions of sex is that it's 100% honest - rare to find. Anybody trying to ban the book, would have to reveal themselves as a blatant repressor, yet another idiot who wants to put a fist to our ears and mouth. Though the sex is sometimes shocking, Delany doesn't cross the border into exploitation; he demonstrates a great ability in his sexual descriptions and careful placement of each scene. The sex scenes are intrinsic to the fabrication of the characters, and as one of the central concerns of the book is individual identity, they are important. On a wider political level, beyond the book, the scenes are important in a world so sexually mixed up.

People have discussed how Dhalgren should be classified - SF or not? It's a difficult question. In a way, it might be better for the book if it weren't recognised as SF: we all know how the label of SF can kill a book to the wider audience. Equally, as is apparent by some of the bad reviews the book is getting here: some SF fans feel let down with Dhalgren, that there isn't more of an SF theme. It's interesting to me that this book isn't talked about more, and outside of 'cult interest'. It deserves a wider readership. Partly the problem is it's unclassifiable nature. I'd guess, that one of Delany's aims is to thwart confines of classification, force us to question / answer what identifies something as what it is, break (down) rules, stretch our perception of the purpose of writing. Ultimately, I'm glad that Dhalgren stands proud within the classification of SF, it demonstrates that SF is packed with a strong range of titles, tackling universal issues on par or perhaps better than other genres.

Well, I partly apologise for this review. I wanted to try to tear away some of the mythology surrounding the book and cry out it's a ripping yarn of an individual finding his way through a world on the brink, which it is!!! [But no, it doesn't have a conventional 'story'.] I'd sit with the book for hours at a time, getting through the book, chunks at a time, and with intense pleasure. Because the book is so long, Delany, with a magician's ease, also manages to convey a whole lot more. No doubt this book isn't for everyone. Also no doubt: MANY MORE PEOPLE SHOULD BE READING THIS BOOK.

Dhalgren is as much a work of art as it is a novel. If you're looking for a book with a coherent, easy to follow plot, which requires no concrete-thought and little effort - then this book is not what you're looking for.

Centrally, Dhalgren is focused on a post-apocalyptic city and a memory-challenged, half-psychotic, losing the battle with sanity and reality drifter who loses a complete handle on normal time, and who can't remember his name or his past. The drifter, dubbed "the Kid", becomes a central figure in this city of nearly 3000 eclectic individuals. The city, Bellona, is one of the largest remaining cities in the US (and assuredly the most surreal). A young girl, a street "gang", a notebook, and a fallen city filled with eccentrics all combine to become the world for the Kid.

In this world, the family which holds onto the past, lives in an apartment and tries to hold the family unit together are depicted as the non-sane. Those that sleep in the park, wander the city, have different sexual partners and act eccentrically regularly are the sane inhabitants.

That said - Dhalgren is not the plot, but the adventure. You have to be in the mood for stream-of-consciousness thought from the main character (possibly a mirror of the author himself?), disjointed plot, and be okay with the fact that not everything is going to be understood the first read through. I've reread Dhalgren twice since my original reading and find new things every time. I've had different thoughts on each reading. Though, as a constant through all my readings, my emotions follow the book like a roller coaster. Throughout the reading I have periods of depression, restlessness, thoughtfulness, happiness and other emotions evoked through the story. I only find this in the very best of books.

This is a book that must be read to be understood, and re-read to be fully valued. It should be approached as a work of art or not at all. Take a chance on this book! If you don't like the book by page 100 then you won't like the book, period. But, if by page 100 you are as enthralled as I was, strap yourself in - you're in for a treat.