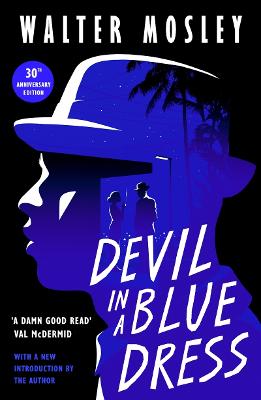 Devil in a Blue Dress

* WINNER OF THE CWA JOHN CREASEY AWARD* * THE FIRST NOVEL BY INTERNATIONALLY ACCLAIMED WRITER WALTER MOSLEY * 'A damn good read' VAL MCDERMID 'A brilliant novel' JONATHAN KELLERMAN 'A first novel of astonishing virtuosity' SUNDAY TIMES I need to find somebody and I might need a little help looking... The summer of '48 in the city of Angels and there's heat on the streets when Daphne Monet hits the sidewalk. Heat when she disappears with a trunkload of somebody else's cash. Easy Rawlins is a war veteran just fired from his ... Read More

* WINNER OF THE CWA JOHN CREASEY AWARD* * THE FIRST NOVEL BY INTERNATIONALLY ACCLAIMED WRITER WALTER MOSLEY * 'A damn good read' VAL MCDERMID 'A brilliant novel' JONATHAN KELLERMAN 'A first novel of astonishing virtuosity' SUNDAY TIMES I need to find somebody and I might need a little help looking... The summer of '48 in the city of Angels and there's heat on the streets when Daphne Monet hits the sidewalk. Heat when she disappears with a trunkload of somebody else's cash. Easy Rawlins is a war veteran just fired from his job. Drinking in a friend's bar, he wonders how to meet his mortgage when a white man in a linen suit walks in, offering good money if Easy will locate Miss Monet, a blonde with a reputation. It's a simple decision, but for one thing. Nobody warned him - better the devil you know... 'Magnificent... a wonderful new talent' Financial Times 'Sharp and meatily convincing' The Times 'Perfectly balanced concoctions of lust, violence, politics and race' Sunday Times Read Less

All Editions of Devil in a Blue Dress

Devil in a Blue Dress, Volume 1: An Easy Rawlins Novel

This Year You Write Your Novel

Down the River Unto the Sea

Devil In A Blue Dress

I had the opportunity to read Walter Mosley's novel "Devil in a Blue Dress" (1990) when it was presented as part of a Black Voices reading group at the local public library. It was my first experience with the author. Mosley (b. 1952) is best-known for his series of noir mysteries featuring a tough African American detective named Easy (Exekiel) Rawlins. Although I have some familiarity with noir, this book was also the first I have read with an African American protagonist and a predominantly African American setting. "Devil in a Blue Dress" was the Mosley's first novel. In 1995, it became a movie starring Denzil Washington.

The story is set in the Watts area of Los Angeles in 1948. The hero, Easy Rawlins, immigrated to Los Angeles from an even rougher area in Houston. He saw extensive combat experience in WW II where he was fearsome in hand-to-hand combat and killed many German soldiers. Rawlins wants a peaceful, successful life. He completes his high school education and contemplates college. He gets a good job as a machinist in an aircraft production plant and saves enough money to buy a small house with a garden which he loves. Due to an altercation with his boss, Rawlins is fired and fears he will not be able to meet his monthly mortgage payment.

In his leisure time, Rawlins drinks at a small out-of-the way bar owned by an ex-boxer, Joppy. Joppy introduces Rawlins to a white man, DeWitt Albright of questionable business and connections. Albright offers to pay Rawlins for information about the location of a young white woman, Daphne Monet, who is known to frequent African American establishments in the Watts area.

With misgivings, Rawlins accepts the job and gradually realizes the trouble he has brought on himself. Finding Daphne brings Rawlins into a complex picture of murders, double-crosses and mysteries. Along the way, Rawlins is arrested and beaten by the Los Angeles police and nearly loses his life at the hands of several competing parties with their own reasons for finding Daphne. Several of Rawlins' friends are killed. In the process of the tale, Rawlins introduces a welter of sinister yet fascinating characters including Rawlins' violent friend "Mouse", Albright, and Daphne herself. The plot is tangled.

Character development and atmospheric portrayal of late 1940's Los Angeles are much more important to this book than plot development. The book offers a grittily realistic portrayal of African American life in the Watts of its time as the scene shifts among several bars, rooming houses, brothels, liquor stores. Much of the story shows the nature of African American -- white relationships as Rawlins is harassed by the police, fired from his job, and thwarted in his efforts. Rawlins and Albright are in a way complimentary characters. Daphne is a pivotal figure in the racial tension developed in the novel.

The book makes highly effective use of African American speech patterns. "Easy" Rawlins develops and gains trust in himself during the book. He calls upon his war experience and his toughness to stay with the situation and not run away after he finds himself in over his head. At critical points in the story, he listens to an internal "voice" which tells him what to do. A basically conscientious and decent man, Rawlins learns to hold his head high and to do what he needs to do in the situations that present themselves.

The story became relatively clear with close reading. The portrayal of Los Angeles life, the character development, and the observations about relationships between African Americans and whites, help bring this book to a level beyond noir fiction. I was glad of the opportunity to get to know this book.

An absorbing novel. As good as Hammett! Well, maybe not but pretty damned close! It will suck you in.

Great Read....much better than the movie, of the same name. However the movie was also very good entertainment...