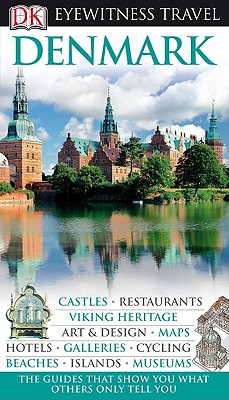 All Editions of Denmark

They stole it from me at Kennedy Airport

This book is lavishly illustrated, which is probably why it was taken from the bottom of my suitcase, but I packed it because it had a few words in Danish at the back-count from 1 to 10, for example-which I thought would be useful.
When I got to Copenhagen, however, I was sorely disappointed-the city described in glowing terms was end to end filthy, with paper and botlles on the ground everywhere, even outside the royal palace. Where we sat we found only people drinking, mostly beer, in huge quantities, and the young men seemed to want to knock you down, in the airport getting off the plane, in the street, in the hotel. One filthy old man grabbed at my sweater collar, trying to pull it down. A nasty place indeed.
But the pictures in the book are very pretty. July 2008.