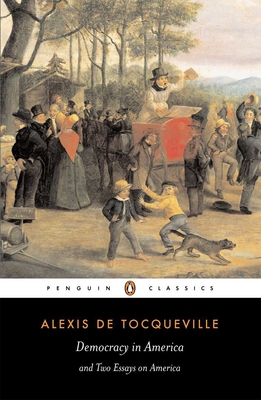 Democracy in America and Two Essays on America

A brilliant new translation of de Tocqueville's masterpiece also includes an account of Tocqueville's travels in Michigan among the Iroquois. Read More

A brilliant new translation of de Tocqueville's masterpiece also includes an account of Tocqueville's travels in Michigan among the Iroquois. Read Less

The Ancien R?gime and the Revolution

Memoir on Pauperism: Does Public Charity Produce an Idle and Dependent Class of Society?

Life of Black Hawk, or Ma-Ka-Tai-Me-She-Kia-Kiak

This is the best work of history and political science that I have read, and I read a lot. It contains a first hand account of what the laws of America and the states and the counties produced in the way of a people. This from a French aristocrat! From the detail he provides on the structure of US government, you will get a civics lesson you probably never had. Along the way, he points out the lack of industriousness produced in the slave-holding states, the ruthlessness of the stealing of Indian lands. He predicted both the civil war and the rise of the U. S. and Russia as world powers. His chief warning is that the centralization of state power will lead to a reduction in personal freedom.