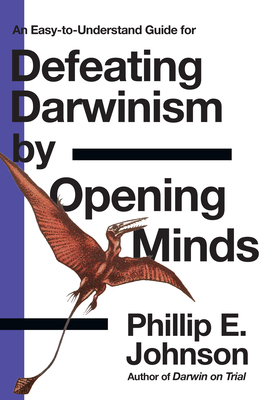 Phillip E. Johnson provides an easy-to-understand guide on how to effectively engage the debate over creation and evolution. Read More

Phillip E. Johnson provides an easy-to-understand guide on how to effectively engage the debate over creation and evolution. Read Less

All Editions of Defeating Darwinism by Opening Minds

Men and Women in the Church: Wisdom Unsearchable, Love Indestructible

Where the Red Fern Grows

Evolution: A Theory in Crisis

Little Britches: Father and I Were Ranchers

Most intellectually dishonest book I've ever read, aside from Johnson's other books. I started noting the deliberate distortions and lies as margin notes, but gave up half way through as the pens kept running out of ink.

But, what can you expect from a person who seems content to dissemble for the Lord because, you know, it's for the Lord!

The only good thing about this book is that it is so incompetent in its effort that anyone following its lead will look like an utter 'Dueling Banjos' goober. The bad thing about that is they will continue to blither and pray their way through a life where common sense is really not wanted as Death is just too scary when you look at it like a Growed Up.

I'd say this book is on par with Johnson's other works, one of which also share bookspace on my Comedy/Humor shelf, along with such classics as Physical Science for Christian Schools and Chariots of the Gods.