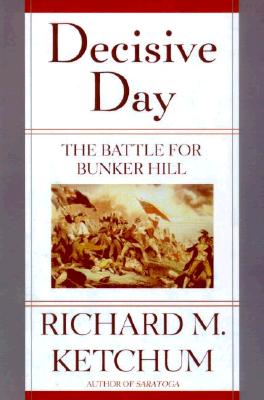 Boston, 1775--and the story of the famous battle for Bunker Hill, which officially launched America's war for independence. Photos, maps. Read More

Boston, 1775--and the story of the famous battle for Bunker Hill, which officially launched America's war for independence. Photos, maps. Read Less

All Editions of Decisive Day: The Battle for Bunker Hill

The Winter Soldiers: The Battles for Trenton and Princeton

Divided Loyalities: How the American Revolution Came to New York

Devil of a Whipping: The Battle of Cowpens

Redcoats and Rebels: The American Revolution Through British Eyes

Divided Loyalities: How the American Revolution Came to New York

If you think you know everything about the battle of Bunker Hill, I suggest you try this one. Ketchum is an excellent writer and historian who has mastered the sources on this issue. While there are plenty of details to satisfy the specialist, he also puts the battle into context and paints a convincing picture of the feelings of both the British and the colonists following Lexington and Concord.
Gage doesn't come off very well in this book.
I recommend it and not just for those interested primarily in military history.

Right at the Revolution

"Decisive Day: the Battle for Bunker Hill" is historian, writer and editor Richard M. Ketchum's thoughtful study of the battle that confirmed the fact that the British colonies in America would not find a compromise with their mother country and would establish their own nation by force of arms. Ketchum takes his readers through the philosophical and political landscape of the times leading up to the rupture of revolution and makes good sense and a good story of the events and personalities at the founding of the United States.
"Decisive Day" is not just a blow-by-blow account of the fight, a head-on struggle between a mixed force of colonial militia matched against a superior number of British Regulars. Ketchum uses varied and interesting original sources to show the wide gap in understanding that developed between crown and colony that led to the revolution.
The author is adept at explaining the fascinating way that great events were carried forward by common people. Far from a cartoonish portrayal of British Officers as foppish incompetents, Ketchum shows the effort British commanders on the scene went to to appeal to what they thought of as common sense and patriotism to keep the colonies within the empire. He also helps the reader appreciate frustration colonial leaders had with parliment and documents first the drift and then the flood tide of realization by both parties that they would not find a peaceful solution to their problems.
"Decisive Day" is not dry political discussion however. Ketchum writes with grace and respect and humor of the personalities involved. He also provides a crisp description of the action at Breed's Hill. And he makes a good case for the idea that the battle, a defeat for American forces, forged an understanding among those Americans that they had stood up long and well against disciplined regulars, and made the British pay dearly for the win. In the end Bunker Hill and the battles that followed convinced the Americans that what they inherited from England did not outweigh a country and a future they could make for themselves.