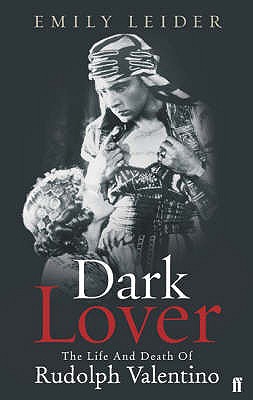 Dark Lover: The Life and Death of Rudolph Valentino

Rudolph Valentino was the silver-screen legend who for ever changed America's idea of the leading man: a frightened young fellow who became the cinematic sex-god of his day. In this definitive retelling of Valentino's short and tragic life - the first fully documented biography of the star - Emily W. Leider looks at the Great Lover's life and legacy, and explores the events and issues that made him emblematic of his time. Valentino was reviled in the press for being too 'feminine' a man; yet he also brought to the screen ... Read More

Rudolph Valentino was the silver-screen legend who for ever changed America's idea of the leading man: a frightened young fellow who became the cinematic sex-god of his day. In this definitive retelling of Valentino's short and tragic life - the first fully documented biography of the star - Emily W. Leider looks at the Great Lover's life and legacy, and explores the events and issues that made him emblematic of his time. Valentino was reviled in the press for being too 'feminine' a man; yet he also brought to the screen the alluring, savage lover who embodied women's darker, forbidden sexual fantasies. In tandem, Leider explores notions of the outsider in American culture as represented by Valentino's experience as an immigrant who became a celebrity: the silver screen's first dark-skinned romantic hero. Read Less

All Editions of Dark Lover: The Life and Death of Rudolph Valentino

Myrna Loy: The Only Good Girl in Hollywood

Yesterday: A Memoir of a Russian-Jewish Family

Pickford: The Woman Who Made Hollywood

Beyond Paradise: The Life of Ramon Novarro

When it comes to mysterious silent star bigraphies it can be a hard task. However Emily Leider has finally figured out how to cleverly make a story of fact read like a book of fiction. You can tell she throughly researched Rudy's life, right down to his cirth name which so many people have misrepresented (Rudolpho Alfonzo Rafaelo Pierre Filbert Guliemi). She points out that Rudy only changed his name to Valentino later because in italian it means "sweetheart". I was throughly impressed with this books and would highly recommend it. For the first time there is a books about one of the megastars of the silver screen that doesn't beat around the bush!

The Mystique Lives On

More than 80 years after his death, the name of Rudolph Valentino is still instantly recognizable to most movie fans--even those who have never seen one of his films.

Emily Leider does an excellent job in showing us the man behind the legend, the man behind the mask. The story of his youth in Italy strikes a chord with readers even now because of his restlessness, his searching for something. Valentino was not a good student and not cut out for the military career he thought he wanted. Finally, after failing at both, the 18 year year old bravely sailed for America. He sailed alone; he knew no one in the New World. Neither did he speak English.

He landed in New York City, the center of immigrant life and quickly made connections with other Italians who could show him the ropes. He groped around with menial jobs, anything he could get, until he discovered dancing. Dancing in pre-World War I New York was a specialty Valentino was made for. The "tea rooms" where he danced attracted lonely women who paid for the pleasure of learning the latest ballroom dances. Was Valentino a gigolo? Maybe.

With his dark good looks, smouldering eyes, and ability to learn the dance steps quickly, Valentino became a well-paid and sought after dancer. He made connections with wealthy women, broke into films (shot on Long Island) in small roles, and made a lot of enemies. After a scandal broke concerning a dead husband and a messy trial, Valentino headed west. He landed in San Francisco but soon migrated to Hollywood to try his luck in pictures again.

He ingratiated himself with picture people, landed some small roles, and was doing ok with the help of actors like Norman Kerry and Alla Nazimova. But it was his friendship with writer June Mathis that would land him his first major role in a film that would catapult him to stardom. The film was "The Four Horsemen of the Apocalypse."

Leider carries us through the heady period of Valentino's movie stardom, his failed marriages to Jean Acker and Natacha Rambova, his maybe affair with Pola Negri, and the rumors of his affairs with men. We learn of the hideous legal entanglements (bigamy) and fights with studios (over money) that got him banished from films for more than a year. We learn of Valentino's national tour in a dance act with Rambova and his triumphant return to films.

We get a lot of information about Valentino's big films like "Blood and Sand," "The Sheik," "Cobra," "Beyond the Rocks," "The Eagle," and his final film, "Son of the Sheik." Leider also fills us in on Rudy's interest in the occult and his poetry writing (a 1923 best seller titled "Day Dreams").

Ultimately, Leider's story must end with the sad and shocking death of this great star and icon. She details and blazing headlines that followed the daily hospital reports of Valentino's illness (peritonitis?), his seeming recovery, and swift relapse into a coma and death. The media frenzy surrounding Valentino's illness and death is still unsurpassed. I have seen the newsreel footage of the hordes of people who swarmed the city streets in hopes of seeing Valentino's coffin. Leider shows newspaper accounts of the riots that ensued as tens of thousands of people tried to get one last glimpse of their idol. There were suicides in reaction to Valentino's death. There was the mysterious "woman in black" who followed his coffin west by train as it made its way across country. And of course there was Pola Negri screaming out her love for Valentino, stories of their impending marriage, and accusations of murder..

A must for film buffs. A must for anyone who ever wondered who Rudolph Valentino really was.