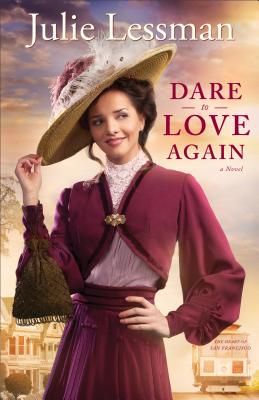 Sparks fly when a sassy socialite must rely on a handsome no-nonsense detective for protection on the rough-and-tumble streets of San Francisco in 1903. Read More

Sparks fly when a sassy socialite must rely on a handsome no-nonsense detective for protection on the rough-and-tumble streets of San Francisco in 1903. Read Less

Love at Any Cost

A Passion Most Pure

It Happened at the Fair

I loved Ali and Nick

I loved Ali and Nick! There were lots of LOL moments as well as heart-touching scenes. Another wonderful, fantastic read for me! Oh, Julie, keep on writing!

"ANOTHER WINNER FOR JULIE LESSMAN"

"Dare to Love Again" is the second novel in The Heart of San Francisco trilogy of the McClare family, from award-winning author, Julie Lessman. Socialite Allison McClare's goal to be an independent woman is met with opposition from Detective Nick Barone (long e), whose beat is the streets of the wild Barbary Coast, in which the Hand of Hope School for girls - where Allison is the new teacher of English and drama - is located. Nick's secrets from the past have left him with a grudge against the upper class - Allison's belief that all men are liars, frauds, or fortune hunters, stems from the pain caused by a broken relationship. The humorous barbs between Nick and Allison start on the first page and don't let up until the last page of this delightful novel. Nick and Allison are equally surprised when romantic sparks start to fly.

From Julie Lessman's description of a "lighter, shorter, less complicated series - with less romantic and spiritual passion" (as compared to her Daughters of Boston and Winds of Change trilogies), I wasn't sure what to expect with this series. What I DID expect was to be thoroughly entertained and inspired - as Julie is a masterful writer - and I wasn't disappointed!!

Julie's heart-warming characters are in abundance, as usual. The girls and staff of Mercy House Orphanage are a touching addition to the story - watch out for little Lottie, she'll "steal your heart"! The "on-again, off-again" romantic relationship between Allison's mother, Caitlyn, and Allison's deceased father's brother, Logan, will have you cheering for, and sympathizing with, each of them before the story ends.

"Dare to Love Again" is chock-full of humor, suspense, passion, drama, secrets, romance, realistic characters, redemption, forgiveness, warm family settings, hope, regret, love, faith, and the ever-wonderful happy ending - a treat for ALL readers!! The McClare family is a delight - just as the O'Connor family was in Julie's two previous series!! I've loved each and every novel she's written, and I await - however impatiently - the October 2014 release of the final novel in the series, "Surprised By Love"!!