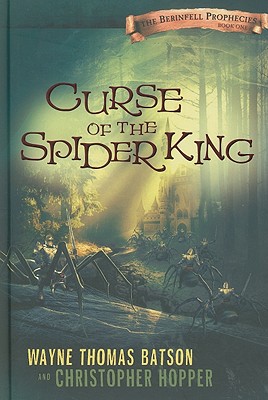 Curse of the Spider King

The seven succeeding Elven Lords of Allyra are dead, lost in the Siege of Berinfell as babes. At least that's what everyone thinks until tremors from a distant world known as Earth, reveal strange signs that Elven blood lives among its peoples. With a glimmer of hope in their hearts, sentinels are sent to see if the signs are true. Read More

The seven succeeding Elven Lords of Allyra are dead, lost in the Siege of Berinfell as babes. At least that's what everyone thinks until tremors from a distant world known as Earth, reveal strange signs that Elven blood lives among its peoples. With a glimmer of hope in their hearts, sentinels are sent to see if the signs are true. Read Less

All Editions of Curse of the Spider King

The Rise of the Wyrm Lord

The Rise of the Wyrm Lord

In the Curse of the Spider King, the elf lords are taken from their birth home and hidden on a strange planet called earth. The enemy hide them there so as to destroy the elf's royal line and obey their master, the Spider King, who wanted them dead. Elves of their land has been searching for them for years but the rescue is a bit of a challenge because the lords are thirteen, think they are humans, have adopted families, and think 'how could the possibly be royalty of another world?'

This book was good. I really enjoyed the characters and the two authors, Wayne Thomas Batson and Christopher Hopper, know how to put a story together. Each character had their own battle they had to face which brought great examples of forgiveness, sacrifice, trust, and acceptance of one's self. An example of how anger and hate is a destroyer was also in the book. The characters learn about how to trust God even in the most desperate circumstance and that no matter what, no matter what anyone has ever called or treated you as, he loves you (something all of us should remember).The book is meant for those 12 and up and is an excellent book for anyone looking for a decent story for a young adult.

The First Book From Both Batson and Hopper

When finally I got my hands on this book, it was worth the wait. Just like the previous books by Wayne Thomas Batson and Christopher Hopper, it was filled with adventure, action, suspense, and page-turning plots. Fans of Batson and Hopper will not be disappointed by the authors' latest release; they will love the new characters, settings, and creatures. It was quite interesting seeing the styles of both authors combined.

The story had a unique twist; instead of humans from Earth traveling to another world, elves from another world travel to our planet, in search of seven unsuspecting thirteen-year-olds who hold the key to survival of the elven race. Evil forces are also on the hunt, in a race against time to kill the seven before the elves can reach them.

In the beginning of the book, I thought it was a little slow (only compared to Batson's previous novels!), but it didn't take long before I was hooked. The characters, who are seventh graders, might be easier for middle schoolers to relate to; but readers of all ages who are fans of Wayne Thomas Batson, Christopher Hopper, or fantasy in general will love the book. I also liked how God and Christianity seemed to play a bigger part in this novel than in some of the authors' previous books.

I especially recommend this book to librarians - as they are the heroes in this story! - and to people who say they don't like to read. Their opinion just may change after reading this!

Curse of the Spider King

While a little confusing of a read the first time around (there are a lot of characters) I really enjoyed Curse of the Spider King, and while I was a little sorry not to get the Allyra until the very end I look forward to it's sequel: Venom and Song. The story really begin 800 years ago in the Elven land of Allyra, where the children of the seven elven lords are kidnapped and sent to Earth. Skip ahead about 11 or 12 earth years as the elven lords reach the age of reckoning, and age where their hidden gifts and powers start showing themselves. Elven sentinels sent to earth to find and bring back the young lords but they are not the only ones searching, Drefids, dangerous minions of the Spider King r are also looking for them in order to finish the job they did not dare to do before. As the elves try to return to Allyra they encounter more and more resistance until it finally reaches a climactic battle in Scotland where remains the last open portal.

Curse of the Spider King, the first in the Berinfell Prophecies, was co-written by Wayne Thomas Batson and Christopher Hopper. It is an allegorical Christian fantasy fiction with many moral themes.
Seven Lords of Allyra, the Elven world, were taken by the Spider King, a wicked enemy bent on eradicating the elves from existence. They were then lost to earth where they were adopted into normal human families. Soon later, Sentinels were sent out to find them and guide them home, before the chiefs could kill them. They must band together, each finding his own powers, and return to Allyra to lead the battle against the Spider King.
The Curse of the Spider King does not get very compelling until about 40-50 pages into it. The writing, description, character development, and overall excitement and buzz is excellent. However, there were too many main characters to keep track of, especially when they are not at first together. Then there are the Sentinels that guarded each, and some prominent Elves and enemy chiefs in Allyra. Overall, the book was well worth it!

Seven young teenagers discover something about their past that changes their lives forever. They are all Elves, the Seven Elf Lords, to be precise. All the Sentinels work to bring them back to their real world, back to their real people. But the Spiderking, who first kidnapped them, is out to kill them. He and his Drefids did not kill them before in fear of a curse that would only be broken when they reached the age of reckoning when they were around thirteen. Then, their powers would mature and become strong. You will devour this book as you watch in your mind?s eye the battles and struggles for justice and righteousness.