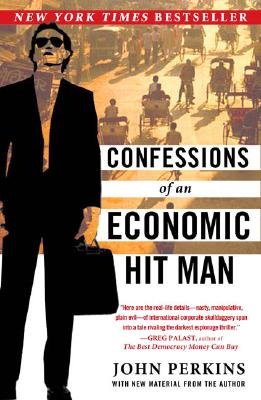 Confessions of an Economic Hit Man

All Editions of Confessions of an Economic Hit Man

The Secret History of the American Empire: The Truth about Economic Hit Men, Jackals, and How to Change the World

Psychonavigation: Techniques for Travel Beyond Time

The Secret History of the American Empire: Economic Hit Men, Jackals, and the Truth about Corporate Corruption

Blackwater: The Rise of the World's Most Powerful Mercenary Army

The Creature from Jekyll Island: A Second Look at the Federal Reserve

Sofar, I have bought 4 copies (in the last 2 months) of this book to give/lend to my friends !!!

Its the most useful book I found after the Harbinger from Jonathan Cahn.

If somebody desires to really understand history in the last 50 years, this book is one of the few trustworthy eye openers.

America will become great again when we as a nation face this situation and address it !

I was amazed at the frankness of the author and wish that I had been privy to this information 40 years ago. That being said, it was still a refresher course in what I already knew. Yet, it was still worth the read and possibly a reread. These are things that one should never forget.

Where does the problem start?

The basic primer for how International Banking affects ALL countries and sets them up for financial failure. The same group that sets the stage for collapse are the ones to come in and 'rescue' the country with more disastrous consequences.

This book will definitely open the eyes of the people that do not realize how, in reality, there is no such thing as coincidences when it comes to politics and economies. The World's political and economic events are planned and followed; and viciously if the need arises. Good people around the World are always paying the price that the greedy and power-hungry force upon them.

HOODWINKED: an Economic Hit Man Reveals Why the World Financial Markets Imploded-and What We Need to Do to Remake Them by John Perkins, Broadway Books, New York, 2009, 243 pp Reviewed By Ted Schmidt
[

This book is so concise, so packed with relevant information and prescient analysis that it could be taught in senior high school courses. In other words it is meant for a broad general audience.

This book is so concise, so packed with relevant information and prescient analysis that it could be taught in senior high school courses. In other words it is meant for a broad general audience.The author, John Perkins was the chief economist for a major consulting firm in the 70s. He had a catsbird seat on the devastating work of the World Bank and IMF as they imposed Structural Adjustment Programs on much of the Third World. Dominated as those institutions were by the USA, they managed to enrich the developed world and companies like Bechtel beyond their wildest dreams. Conversely with the help of corrupt local elites who were bought off (Marcos, Duvalier, Mobutu et al) they drove country after country into abject, dependent poverty. All this Perkins detailed in his first book on the subject Confessions of an Economic Hit Man, an expose which was on the New York Times best seller list for 65 weeks (2004).

With the birth of a grandchild, John Perkins finally understood his role as "a slaver", a pimp for the American empire and its business class. He began his new career as a whistle blower, big time on a group he calls the "corporatocracy", the corporations who have feasting on the carcasses of the Third World in the post Reagan era. Not that this was new but it was hidden to most Americans who in their blind exceptionalism were convinced that Uncle Sam was the incarnation of a global Santa Claus spreading aid and democracy everywhere. Also given the addiction to rancid and uncritical evangelical religion, they believed their country was the veritable face of Jesus Christ to a suffering world. The facts prove otherwise. Anybody with minimal knowledge of empires and history knew this was a crock---American historians had been documenting the converse for decades--- I.F.Stone, William Appleman Williams, Gabriel Kolko, Stephen Kinzer, Richard Barnet, William Blum, Noam Chomsky and a host of others. Sadly it was not until 9/11 that many citizens were stunned into deeper questioning and the now infamous "Why do they hate us." Perkins responds with Let Me Count the Ways.

The author's entrée into this new moment of course was the great economic meltdown precipitated and created by the behemoths of Wall Street, those whose salaries had gone from thirty times the average industrial wage in the 60s to over five hundred times in the 90s. This is the "predatory capitalism, the mutant form" that Perkins rails against, a market fundamentalism with massive tax breaks for corporations and the gutting of financial regulations.

The title of the author's chapters, each an essay in itself, lays the problem out in readably concise terms: "Not a Fluke," "Keynes vs. Friedman" a chapter on the "messianic belief in privatization and profits" over the common good. Milton Friedman managed to hoodwink generations into believing that corporate managers wedded to bottom lines should usurp governments as tribunes for the people. Here he fingers men like George Schultz who left the University of Chicago to enable the Reagan revolution, the thinly diguised attack on the poor and middle class. Add Alan Greenspan and Richard Rubin, Bill Clinton's guru to this toxic mix.

The author's chapter on "Iran" (the subversion of Iranian democracy by the CIA in 1953) is telling. Perkins had gone there to do his mercenary work for US corporations and was tipped by a friend to leave immediately on the cusp of the Iranian revolution of the mullahs in 1979. He quotes with approbation former CIA agent Bob Baer:

"There is no doubt that the 1979 Iranian Revolution (which placed the nefarious Shah on the throne) was rooted in the 1953 coup." Sadly history under the amnesia making bread and circuses consumer culture was unknown to most Americans, But not for Iranians.

The chapter Mercenaries (the suborning of fiduciary responsiblility which shaped the ethics for generations who remembered the Depression) excoriates the role of the new "superstar" CEOS who sold themselves to the highest bidders and with the use of mergers, acquisitions and short term deals began to ape the behaviour of the Robber Barons. Long term goals were exchanged for short term deals and "inventive" accounting. Read Enron and Arthur Andersen.The author it turns out has little respect for the predatory practices of Bill Gates, the excesses of Lawrence Ellison(Oracle) or the notorious Jack Welch, former CEO of GE. While these billionaires enriched themselves, 40 million people in the US were living below the poverty line. a subject few Americans wish to talk about. With the use of public statistics Perkins points out that the top 10% owns 90% of American stocks, bonds, trust funds and business equity and over 75% of non-home real estate. It is this "corporatocracy" which controls America, rents Congress, dominates the media and makes a sham of democracy.

It is always refreshing to be reminded by a whistle blower that midst the effluvial stain, seeemingly ubiquitous there are always people of conscience who refuse to go along. For the author it was his Business Mangement prof at Boston University in 1966 whose warnings about the soon to come deregulation craze proved prophetic. Through the book and the chapters on deregulation Perkins salutes Profesor Ashton's wise warnings.

The second half of Hoodwinked is entitled The Solution.
Changing Capitalism's Goal seems like a long haul to me. Perkins blames those on Wall Street banks who replaced the captains of industry.Their goal was pure profit and short term gain and not ethical fiduciary rsponsibility to long term productivity. Maximizing profits regardless of social and ecological costs must be rethought in terms of a sustainable world. The unconscionable bonuses paid out to banks and counting houses after the meltdown shows that this surely is a pipe dream, at least in the forseeable future. This change of course can never be managed from the top down and in his chapter David vs Goliath Perkins acknowledges this and shows how David ultimately stopped slavery, ended apartheid etc. but how do you get people to stop gorging themselves on Tiger Woods and other servings of the bread and circuses which dominate American cuture. Yet Perkins is not naive. He understands that we are all One Worlders now and that "our children's future's are interlocked with the futures of the children born in Somalia." Terrorism he understands as the result of First World greed condemning the poor and their children to desperation.

Perkin's solutions include re-regulation of the major sectors of the US economy so that the economic meltdown does not occur again. He yearns for new ikons, wishing that Donald Trump and his ilk have had their day.He pines for new Professor Ashtons in the bankrupt neoclassical economic departments of major universities. He acknowledges the quiet heroes men like his passionate high school History teacher Jack Woodbury without whom Perkins would never have taken up his pen.

In the end John Perkins is a moralist ardently desiring a just world, a greener world one where "the empire of the North would exhibit more compassion."

What is most impressive about this book is the author's courage in pulling back the veil on the hired guns of the ciorporatocracy, those who serve the American enpire like he once did---the John Boltons, John Negropontes and Eric Holder, Obama's attorney general--- "jackals" who are committed to the status quo and who brought us to the edge of the perilous global collapse."