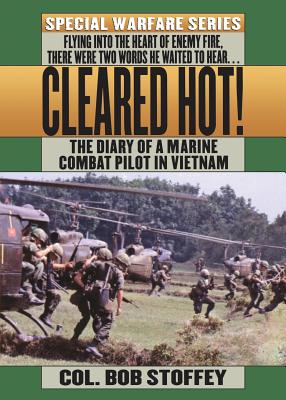 Colonel Bob Stoffey recounts his most deadly experiences as a helicopter pilot in Vietnam--combat so fierce that only acute instinct and skill brought him back alive. of photos. Martin's Press. Read More

Colonel Bob Stoffey recounts his most deadly experiences as a helicopter pilot in Vietnam--combat so fierce that only acute instinct and skill brought him back alive. of photos. Martin's Press. Read Less

Bury Us Upside Down: The Misty Pilots and the Secret Battle for the Ho Chi Minh Trail

Wings of the Eagle

Flying Through Midnight: A Pilot's Dramatic Story of His Secret Missions Over Laos During the Vietnam War

Story of a brave pilot

First the diary like tour in the Marine H-34 Chopper then the wild ride, more fragmented memory of a tour in the Marine OV-10 fixed wing twin prop plane. The book evolves along with the man.
An excerpt of abridged clips from the pages of "Cleared Hot!" by Col. Bob Stoffey ©1992
Major Jerry Kitter and Colonel Stoffey were flying home from a non-combat mission over Viet Nam in 1965. They were flying a UH-34 helicopter, following another chopper in a climbing turn at well over 1000 feet altitude. Stoffey: "I felt a breeze or slight vibration just below my nose. Immediately, Major Kitter slumped forward onto the cyclic stick, causing the chopper to nose dive." Stoffey regained control and then adds, " ...I saw the blood rushing from his face, and there was a hell of a lot of blood...I thought he had been killed, until he moved." Stoffey then made the difficult choice to fly past an artillery battery which may or may not have a medic and flew further to an Army field hospital. He dropped Major Kitter off at the hospital and took off not knowing how bad the head wound was.
5 hours later Kitter just walks up and shakes his hand. He had a 1 inch bandage on his cheek and 2 very black eyes. He said it felt like Joe Louis punched him out.
There IS one awful incident in which elephants were killed but war is hell after all. Many rescues and many attack runs, all excitement.