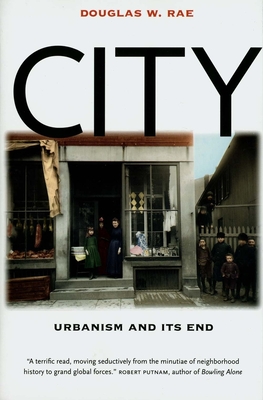 City: Urbanism and Its End

A new understanding of the modern city, its challenges, and why old ideas about urban renewal won't work Read More

A new understanding of the modern city, its challenges, and why old ideas about urban renewal won't work Read Less

All Editions of City: Urbanism and Its End

The Anthropology of Space and Place: Locating Culture

The Politics of Public Space

Many books have been written about the decline of American cities- but I have found none quite like this one. Rae's book is not an abstract set of generalizations, but a case study of one city: New Haven, Connecticut.

The first half of the book begins by talking about the rise of New Haven. At the start of the 19th century, New Haven was just one of many small towns in south central Connecticut. But by 1910 it was an industrial powerhouse with 80% of the region's population. What went right?

Once railroads were invented in the early 19th century, intercity (between cities) transportation became much easier - but at the same time, intracity transportation was still cumbersome. So industry was centralized in a few downtowns, and most people lived within a mile of their work. And cheap energy (through coal and steam) benefited port cities which, like New Haven, lacked the power of falling water and thus did not have a large mill industry. Moreover, coal (unlike modern electricity) was also easier to transport between downtowns than within cities. So labor and capital were centralized in New Haven, which by 1910 was a crime-free, bustling, very urban place.

New Haven stopped growing as early as the 1920s, and started to shrink in the 1950s. What went wrong?

Rae lists a variety of factors- some that were beyond the control of any politician, and some that could have been controlled through more enlightened public policy.
In the first category, Rae mentions the rise of the automobile (which decentralized regions by making transportation within a region easier) and the rise of the electric power grid (which allowed cheap energy to go beyond regional cores). Television decimated the city's volunteer civic organizations, and national centralization of industry meant that local groceries were supplanted by regional supermarkets and New Haven's industries were bought by corporations headquartered in other cities and often moved around the country or around the globe.

In the second category, Rae criticizes highways that encouraged movement to suburbia, public housing projects that anchored low-skill people in urban cores that were losing low-skill manufacturing jobs, zoning that discouraged retail outside of a few commercial streets, New Deal housing agencies that discouraged investment in urban working-class neighborhoods, and urban renewal projects that bulldozed those neighborhoods in the 1950s and 1960s to build more highways and housing projects.

Was sprawl inevitable? Given the wide range of factors cited by Rae, some sprawl was inevitable- but the disastrous decline of New Haven probably wasn't.