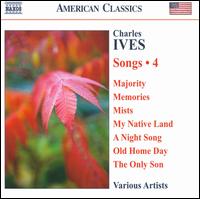 Ives' Songs From M To O

For the past several months, the budget-priced Naxos label has been issuing a new volume in its series of the complete songs of the American composer Charles Ives (1874-1954). It is difficult to keep up with the releases, but I have been learning a great deal about Ives's songs as the series progresses. In the Naxos series, the songs are arranged in alphabetical order. They are performed by a young group of talented singers and pianists affiliated with the Yale School of Music.

Volume 4 of the Naxos series includes 32 songs beginning with "Majority" (1921) and concluding with "Over all the Treetops"(1903) As in earlier volumes, the alphabetical arrangement of the songs produces a collage-like effect with the early sentimental parlor songs or imitations of German lieder of Ives's youth interspersed with some of his most complex, original music. Ives set a wide variety of texts and authors including, among others, on this CD, Kipling, Thomas Bailey Aldrich, Heine,Symons, Ives's wife Harmony, and, most importantly, Ives himself.
In his songs, Ives can be sentimental and profound, original and imitative. His subjects include love, patriotism, nature, family, and politics.

The songs I enjoyed most on this CD are the iconoclastic, difficult works that Ives composed late in his career. The CD opens with the 1921 song, "Majority", the lengthiest on the disk. It opens with a long, heavily chorded, dissonant and blues-like piano introduction followed by a declamatory text, composed by Ives himself, on the virtues of democracy. Another late song with a political theme is "November 2, 1920 (An Election)". Ives composed this song in 1921. The song expresses his disappointment with the results of the presidential election of 1920 which, the composer believed, betrayed the noble cause for which many young Americans died in WW I. The song "Old Home Day" (1920) is a bravura recollection of Ives's childhood and of late 19th Century American life. It features a flute obligato in its second verse. In 1921, Ives composed a short song titled "The New River" which expresses his love of nature and his fear of environmental despoiliation. The final late song I want to mention here is "On the Antipodes" (1923), again with a text by Ives. Written near the end of his compositional career, this song has a massive piano part requiring two players and a declamatory, philosophical vocal line.

The theme of love of country appears in some of the earlier songs on this disk in three versions of a translation of "My Native Land" by Heine. Ives returned to this text and to the theme of homeland many times in his life, showing that it was of great importance to him.

Some of the best of the earlier Ives songs are the two setting titled "Memories" (1897) The earlier song, which begins with the line "We're sitting at the opera house" and concludes with the shout "Curtain!" was recorded in an unforgettable version by Jan Gaetani and Gilbert Kalish in their compilation of Ives's songs of many years ago. The performance on this CD is good, but it pales in comparison to Gaetani's. The two setting of "Marie", one in English and one in German are lovely and unaffected. In "Mirage" (1902), Ives effectively sets a text by Christina Rosetti that sings of loss and heartbreak. And in "Omens and Miracles" (1902) Ives sets a text by Owen Meredith which wrestles with the problem of declaring one's feelings to a would-be beloved.

I found some of the women's voices on this CD especially delightful. The CD includes informative notes which link each individual song to others in the collection. Texts are not included, but most of them are available on the Naxos website. Unfortunately, Ives's own song texts are not provided due to copyright issues.

I have been enjoying listening to and reviewing these CDs in Naxos's series. The series offers the opportunity to get to know Ives's song output in all its breadth. In listening to this CD, I was able to find scores for some of the songs, which increased my understanding and appreciation. I am looking forward to the next volume in the series.