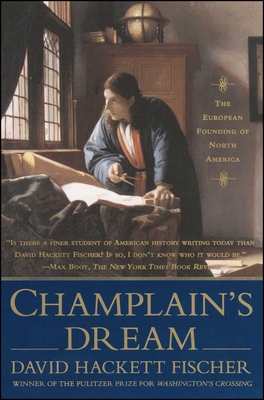 A Pulitzer Prize-winning historian brings to life one of the great figures in North American history, Samuel de Champlain, who founded Quebec 400 years ago and established a colony where respect for the native people and religious tolerance were practiced. B&w illustrations throughout. Read More

A Pulitzer Prize-winning historian brings to life one of the great figures in North American history, Samuel de Champlain, who founded Quebec 400 years ago and established a colony where respect for the native people and religious tolerance were practiced. B&w illustrations throughout. Read Less

All Editions of Champlain's Dream

The Great Wave: Price Revolutions and the Rhythm of History

The War That Made America: A Short History of the French and Indian War

War on the Run: The Epic Story of Robert Rogers and the Conquest of America's First Frontier

Because I am a history buff, "Champlain's Dream" by David Hackett Fischer was recommended to me by a friend. I have found it to be a fascinating book that is fun to read. It is full of documented facts and excitement (hard to believe for "dry" history). I find the book an engaging way to learn more about a time period often overlooked in texts.

I enjoyed the book . it was recommended by a francophile friend. Since my family has French Canaian ancestry I learned much about the place our ancestors settle. The book assumes basic knowledge of European history so may not be suitalbe for a beginner.At 500+ pages of small print plus a 200 page addendum I found it slow going. I would recommend it with that caveat. Probably the best most through biography of Champlain.

The CD was very interesting and informative, although a little more scholarly than I expected. There was so much information about the geography of France, eastern Canada, and the east coast of the US that I had to buy the book to see the maps and pictures. The story tied togeather a lot of the history of the age of exploration with geography. Spain, Portugal, and England were not the only players. France was in the New World Exploration and Exploitation Game too. France may have been a little more civilized about it. Because I read this book I understand why there were Indians at the recent Vancouver Olympics. France's more humane attitude toward the natives in the begining is still evident today, 400 years later.