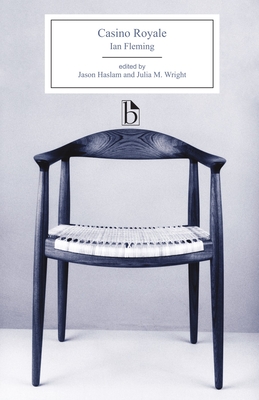 There is only one Bond. Discover the nation's favourite spy in the addictive first novel in Ian Fleming's James Bond series. Catch up on this classic adventure before the release of No Time to Die. ... Read More

There is only one Bond. Discover the nation's favourite spy in the addictive first novel in Ian Fleming's James Bond series. Catch up on this classic adventure before the release of No Time to Die. Le Chiffre is a businessman with expensive tastes, and SMERSH's chief operative in France. But as his dissolute lifestyle threatens to ruin him, his only hope is to risk his paymasters' money at the card table. James Bond, the finest gambler in the service, has a deadly new mission: to outplay Le Chiffre and shatter his Soviet cell. Amidst the opulence of Casino Royale, the two men face each other for a game with the highest stakes of all. 'Bond is a hero for all time' Jeffrey Deaver Read Less

All Editions of Casino Royale

The Man with the Golden Gun

Casino Royale is the first book in the James Bond series. I've seen the movie -- the new and the old version -- many times, but this is the first time I've actually read the book. James Bond is a much more complex character than the way he is portrayed in the movies. Yes, he travels to exotic places to kill people and he has more than his share of liaisons with beautiful women....but the books include his thoughts on his job, his fear and apprehension during missions, and his considerations of retirement, settling down, forming a more lasting relationship with a woman, etc. The complexity of the character just doesn't come through in the movies. The movies are pretty much just action-packed fight scenes separated by drinking martinis and having sex.

In Casino Royale, Bond infiltrates a high stakes baccarat game in order to bankrupt and ultimately ruin a Russian operative, Le Chiffre. With some help from an American CIA agent, Felix Leiter, and another British Agent, the beautiful Vesper Lynd, Bond manages to win a record amount of money at the baccarat table. But Le Chiffre is determined not to be ruined. He kidnaps Bond and Vesper Lynd, setting in motion events that might be the end of Bond.

This book contains one of the most gruesome torture scenes I have ever experienced in a book. The movie starring Daniel Craig depicted the basics of the torture, but left out much of the psychological brutality of the entire scene. I thought the movie version was traumatic....but the book's description is so much more gruesome. It's an important scene that's integral to the plot of the book. It's not overdone and there is absolutely no detailed description of the event or in the injuries to Bond. The horror comes in the matter of fact manner in which Le Chiffre explains what he is doing and why, and the description of how he goes about it. The coldness, the violence, the unfeeling nature of a very evil man.....and the brutality yet simplistic nature of his attack on Bond. In the movie, a knotted rope is used for the attack. But in the book it's a simple household tool, a carpet beater. Le Chiffre comments that it is easy to cause extreme pain and suffering to a man with the simplest of tools if one knows just how to do it. The entire scene sent chills down my spine. It is definitely not for the feint of heart.

The book has 3 distinct sections -- the baccarat game at the casino, the kidnapping and torture, and the aftermath. I didn't much care for the first section of the book. I have absolutely no interest in gambling and there is a lot of explanation about the game, the odds, what cards they are playing, etc. Plus Fleming uses a lot of French, German and Russian words and phrases sprinkled throughout. While that does help create atmosphere, after awhile it just gets old, especially when it's gourmet food, wines, liquors and other details I felt weren't all that important. For me, it was just a bit overdone. After the baccarat game, the action revved up considerably and the story became much more interesting for me. The ending is a bit abrupt, but it makes sense that it ends the way it does.

I listened to the audiobook version of Casino Royale. At just over 5 hours long, it was a relatively quick listen. Dan Stevens narrates. Stevens reads at a nice even pace, and did an excellent job with all different accents and voices of characters. I have hearing loss but was easily able to understand and enjoy this audiobook.

In this, the first James Bond novel by the Earl of Espionage, Ian Fleming, we are introduced to the suave, intelligent, high-living spy who has become a legendary figure in pop culture. Assigned to an unusual job - a game of baccarat against Le Chiffre, a member of the Soviet anti-spy organization SMERSH who has become deeply indebted after spending Soviet funds on his own private business investments - Bond must ensure that Le Chiffre does not win his money back at the tables. After meeting his partner for the assignment, the beautiful Vesper, and hooking up with his CIA couterpart, Felix Leiter, Bond sets out on a mission to disrupt his Soviet enemies and ensure Le Chiffre's disgrace (and probable death). A Bond classic for sure, this book is fast-paced and leads to an exciting climax that won't disappoint, as well as a twist that will leave you asking for more. Do not fear, however, as Mr. Fleming wrote 11 other Bond missions, as well as 2 short stories collections up until his death in 1964.