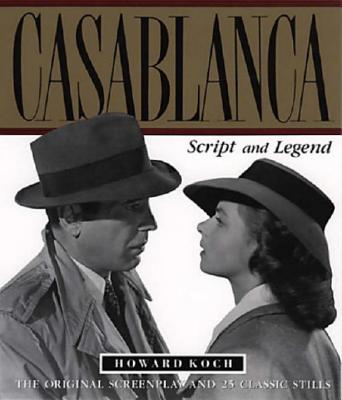 Released in December 1942, Casablanca is the classic of all classic films, the enduring triumph of Hollywood's golden age. Read More

Released in December 1942, Casablanca is the classic of all classic films, the enduring triumph of Hollywood's golden age. Read Less

All Editions of Casablanca: Script and Legend: The 50th Anniversary Edition

Waging the War of the Worlds: A History of the 1938 Radio Broadcast and Resulting Panic, Including the Original Script

As Time Goes by: Memoirs of a Writer

The panic broadcast; portrait of an event.

The Dark Side of the Screen: Film Noir

Persona and Shame: The Screenplays of Ingmar Bergman

The making of The wizard of Oz

A Kiss is Still a Kiss

?Casablanca: Script and Legend? is just the kind of book that lovers of this film will really enjoy. It has the complete final script, wonderful (somewhat corny) production/ P/R photos, and some really great commentary on the movie and its values from a diverse group ranging from a Producer, to semiotician, to Cinephine.

This book was written in 1992 before the DV craze in filmmaking, before Dogma, before Slam Dance... and the commentary really is great because it shows us alternate ways to view the film ?Casablanca?, as well as giving some fun facts to share with our other Cineastes friends.

There is a great production public relations photo of Paul Henreid standing with his left hand resting on the globe, over Europe, looking meaningfully out toward a large ?V? lots of pics of Ingrid Bergman with Henreid and then with Humphrey Bogart looking into the men?s eyes (read the book and you will learn that the script was written as the producer went along so Bergman didn?t know until they shot the last scene if she was escaping with Victor, or staying in Marseilles with Rick); and of course lots of photos of Humphrey Bogart sitting around in a white dinner jacket, a rough diamond in a polished setting (all those stories we?ve heard that Ronald Reagan was originally cast to play Rick Blaine, were just Public Relations to get the stock up- Ronald Reagan was signed to the studio, so whatever they did to get his name into print was still good for ticket sales).

Howard Koch opens the book with the preface relating the sobering attitude of the business of movie making in Hollywood, and along with the other contributing writers in the book, a truly fascinating view of ?Casablanca? emerges.

There is, in the back, a list of original reviews by Howard Barnes and Bosley Crowther- read between the lines because this contains a great flavor of the times, and how people saw movies and stars back then.

J. Hoberman sees Humphrey Bogart and Dooley Wilson as another version of Huck and Jim from ?Huckleberry Finn?, and further states that the film is a perfect example of the Studio System, because it generated a very viable property form the available sources already owned by Warner Brothers. No one originally slated to work on the production end of the film were available and the Cinematographer, and Editor were not the first choices of Director Michael Curtiz, regardless, the film was still a smash hit of the times and has lived on to become a classic.

Aljean Harmetz lets us in on the Public Relations team at work at Warner Brothers at the time, and how the P/R for Casablanca is a fine example of P/R smoke; Roger Ebert in his commentary touches on that special feeling of seeing the film on repeated screenings and how what we know about the stars and the making of the film really allow us to enjoy it more.

My favorite commentary is by Umberto Eco, the noted semiotician who talks about how certain lines, for instance, when Ingrid Bergman says to Humphrey Bogart ?Was that artillery fire, or is it my heart pounding?? get an audience response ?usually reserved for football.?

The bulk of the book is the script for ?Casablanca? and the accompanying production photos, which when you?re reading the script will let you drift off successfully into that special world of the movies. It?s a great read- in fact I see you and this book as the start of a beautiful friendship. Here?s looking at you.