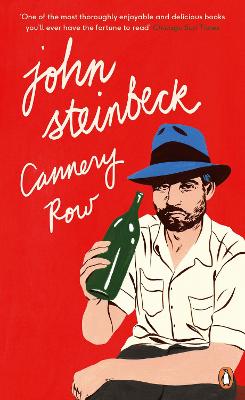 'Cannery Row in Monterey in California is a poem, a stink, a grating noise, a quality of light, a tone, a habit, a nostalgia, a dream.' Meet the gamblers, whores, drunks, bums and artists of Cannery Row in Monterey, California, during the Great Depression. They want to throw a party for their friend Doc, so Mack and the boys set about, in their own inimitable way, recruiting everyone in the neighbourhood to the cause. But along the way they can't help but get involved in a little mischief and misadventure. It wouldn't be ... Read More

'Cannery Row in Monterey in California is a poem, a stink, a grating noise, a quality of light, a tone, a habit, a nostalgia, a dream.' Meet the gamblers, whores, drunks, bums and artists of Cannery Row in Monterey, California, during the Great Depression. They want to throw a party for their friend Doc, so Mack and the boys set about, in their own inimitable way, recruiting everyone in the neighbourhood to the cause. But along the way they can't help but get involved in a little mischief and misadventure. It wouldn't be Cannery Row if it was otherwise, now would it? Read Less

All Editions of Cannery Row

Of Mice and Men

Travels with Charley: In Search of America

A Visit To Cannery Row

John Steinbeck (1902-1968) wrote "Cannery Row" in six weeks during the summer of 1944. He wrote the book, he claimed, as "a kind of nostalgic thing.... for a group of soldiers who had said to me: 'Write something funny that isn't about the war. Write something for us to read -- we're sick of war.'" Steinbeck dedicated the book to Ed Ricketts, the model for "Doc", the main character in the book. Other characters, including Dora, the madam of the "Bear Flag Restaurant" were modeled on real-life individuals as well.

Set in Monterey, California during the Depression, Cannery Row was a part of the city notorious for the processing of sardines and so inspiring the book's wonderful and well-known opening passage: "Cannery Row in Monterey, in California, is a poem, a stink, a grating noise, a quality of light, a tone, a habit, a nostalgia, a dream." Steinbeck's depiction of Cannery Row consists more of a series of interconnected vignettes than of a fully developed novel.

The book develops the character of Doc, a marine biologist who collects frogs, octopuses, starfish, rattlesnakes, and other creatures for sale to museums, universities and others. Doc is highly literate, a lover of science, art and music. Doc also loves his beer and his women. He is also adored by Cannery Row denizens, led by a man named Mack, who live in a local flophouse and work to plan a party for Doc. Other interesting characters in the book include Dora, the madam of the Bear Flag Restaurant, and Lee Chong the proprietor of the local grocery.

The book affectionately and nostalgically describes Monterey and its eccentric too-lovable characters. Although the characters are vividly drawn, they show sentimentality and over-simplification. Portions of the book lag.

In the heart of the book, Doc philosophizes about his friendship with the residents of the flophouse and similar types of people on Cannery Row. Doc finds it "strange" that "the things we admire in men, kindness and generosity, openness, honesty, understanding and feeling are the concomitants of failure in our system. And those traits we detest, sharpness, greed, acquisitiveness, meanness, egotism and self-interest are the traits of success. And while men admire the quality of the first they love the produce of the second."

I enjoyed the pictures of Doc and his devotion to classical music -- particularly the works of Monteverdi, Bach, Beethoven, and Debussy. I also enjoyed the unusual literary references. For example, in an important scene late in the book, Doc quotes at length an ancient love poem "Black Marigolds" originally written in Sanskrit and translated by E. Powys Mathers, The poem begins:

"Even now
If I see in my soul the citron-breasted fair one
Still gold-tinted, her face like our night stars,
Drawing onto her; her body beaten about with flame,
Wounded by the flaring spear of love,
My first of all by reason of her fresh years,
Then is my heart buried alive in snow."

The poem fits appropriately into Steinbeck's story and adds to the book. The musical and poetry references in "Cannery Row" help give the work depth.

I enjoyed my visit to Cannery Row. Its story is told in this enjoyable, deservedly famous book by a great 20th Century American novelist.

John Steinbeck is awesome! This is one of the funniest and most heart-warming books I have ever read. The cast of characters is composed of the unseemly individuals most of us never spend a moment?s time with in our entire lives ? outside of possibly spooning them some soup while volunteering at a local shelter. These are the cast offs, outcasts, prostitutes, derelicts, bums, crooks, hustlers, immigrants and the lost. All of those souls who never show up on our TV programs or at our local churches ? yet they are out there, they live among us ? hidden by our ignorance, dismissal and, possibly, guilt.

This is not a story about the suffering of the down and out. It is not about oppression, poverty, or the plight of the poor. It is a story the takes us through the everyday life of those who live on the other side of the tracks. It is ultimately a story about community and life ? about appreciating what you have, enjoying those you are with and supporting one another in whatever way you are able.

This is a needed tale in the land of more.

We live in a culture that is paralyzed by ?the missing tile? syndrome. Dennis Prager discusses this plight in the video below. In essence ? we tend to fixate all of our energy and thoughts on the things, traits or features that we do not have. We could be in great health, have a wonderful marriage, a fulfilling career, healthy children, and a home of our own ? all blessings in the real world ? but we will often think only of the vacation we weren?t able to take, the new car we can?t afford, the six-pack abs we don?t have and on and on and on. We spend our days lamenting what we don?t have, what our neighbor does have ? meanwhile, our neighbor looks at us with the same feelings. Happiness will forever elude those who cannot be grateful for what they have, enjoy it completely and share it willingly.

It is called contentment ? which is the enemy of a consumer economy. Sometimes, we all need a reminder of what we have, how much worse off we could be ? to just stop looking at those who are ?above? you, but instead look at the billions who are ?behind? you.

Reading about Mac and the boys makes me remember that every one of those people who are on the ?outside? are individuals ? they have a history, a family, life experiences and a story to tell ? of where they are from and how they arrived where they are today. Check out the song ?Moments? by Emerson Drive ? the lyrics are amazing and it hits you in the heart? we have all been loved, but how do so many get lost?

I could read Steinbeck all day long, he is an amazing writer who brings you into the hearts and minds of his characters ? they become your friends and you will carry them with you for the rest of your life. I know I will.

The Sweet Scent of Low Tide

Although John Steinbeck wrote many great works of American literature Cannery Row is my favourite by far.
This short tale of the inhabitants of a stretch of industrial property on the coast of California is a rich little comic gem that Steinbeck lifts briefly into the Summer sun so that we might glimpse a society different from, but not entirely unlike, our own.

Though it's not socially revolutionary like The Grapes of Wrath, nor the genesis of a Hollywood blockbuster like East of Eden, it is told with such precision and with such affection and respect for its ragtag cast of characters that the reader feels privileged to have met them.
Mack and the boys are not bums and drunkards but "gentlemen and philosophers united by a common dislike of a steady job and a mutual feeling for the pleasures of living according to their lights" and Doc, the main character, is "half-Christ and and half-satyr" as he collects his marine and terrestrial fauna for sale to scientific laboratories while unofficially ministering to the sick puppies, lost children and unhappy souls on the Row.

You must be somewhat slipshod in your own morals to like this book, it's not for the ramrod stiff among us. As Lewis Gannet wrote: "It does not rank cleanliness next to godliness, and its everyday vocabulary takes four-letter words in its Elizabethan stride". And there are whores, but you must be able to see them as sisters and daughters with dreams of their own, and better places to be in time.

And so I invite you, after the busy canneries shut their doors in the late afternoon. Come out with the boys to sit on the rusty pipes in the vacant lot, watch as the girl's emerge from Dora's "for a bit of sun if there is any", cross the street to Lee Chong's for a couple of quarts of beer and take them over to Western Biological to see if Doc is in.

This book's concise narrative is what makes it so wonderful. Cannery Row just roles out before the reader like a an old wonderful rug. Every page is like taking a step down a gentle slope and yet somehow Steinbeck builds in so many elements of real human drama. The characters feel more real than most books i've read and the scene with the frogs is particularly amazing. buy it, read it!

Another Steinbeck classic. One of the top three for those interested in Steinbeck's writing. The story follows the rag tag group of hobos whose lives seem to be full of good intentions and not-so-great outcomes. A great tale of humanity,