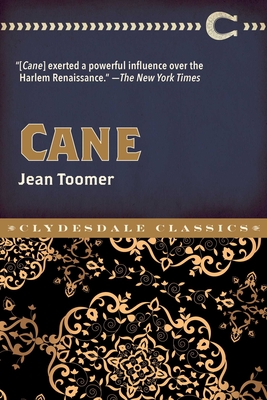 "The Harlem Renaissance writer's innovative and groundbreaking novel depicting African American life in the South and North, with a foreword by National Book Foundation 5 Under 35 honoree Zinzi Clemmons Jean Toomer's Cane is one of the most significant works to come out of the Harlem Renaissance, and is considered to be a masterpiece in American modernist literature because of its distinct structure and style. First published in 1923 and told through a series of vignettes, Cane uses poetry, prose, and play-like dialogue to ... Read More

"The Harlem Renaissance writer's innovative and groundbreaking novel depicting African American life in the South and North, with a foreword by National Book Foundation 5 Under 35 honoree Zinzi Clemmons Jean Toomer's Cane is one of the most significant works to come out of the Harlem Renaissance, and is considered to be a masterpiece in American modernist literature because of its distinct structure and style. First published in 1923 and told through a series of vignettes, Cane uses poetry, prose, and play-like dialogue to create a window into the varied lives of African Americans living in the rural South and urban North during a time when Jim Crow laws pervaded and racism reigned. While critically acclaimed and known today as a pioneering text of the Harlem Renaissance, the book did not gain as much popularity as other works written during the period. Fellow Harlem Renaissance writer Langston Hughes believed Cane's lack of a wider readership was because it didn't reinforce the stereotypes often associated with African Americans during the time, but portrayed them in an accurate and entirely human way, breaking the mold and laying the groundwork for how African Americans are depicted in literature. For the first time in Penguin Classics, this edition of Cane features a new introduction, suggestions for further reading, and notes by scholar George Hutchinson, and National Book Award Foundation 5 Under 35 novelist Zinzi Clemmons contributes a foreword"-- Read Less

All Editions of Cane

The Wayward and the Seeking: A Collection of Writings by Jean Toomer

A Drama of the Southwest: The Critical Edition of a Forgotten Play

Written in 1923, Jean Toomer's "Cane" is one of the lesser-known masterworks of American literature. An enigmatic figure, Toomer (1894 -- 1967) wrote "Cane" at the age of 27 and never published another novel, assuming that "Cane" itself can loosely be so described. The book frequently is described as initiating the Harlem Renaissance, even though Toomer did not live in Harlem when it was written and nothing in "Cane" is set there.

Although short, "Cane" is a difficult, modernistic book that resists easy summarization. It is a mixture of poetry, short stories and vignettes, and closet-drama. The book is in three sections, with the first in third set in a rural community in northeast Georgia while the middle section is set in African American neighborhoods of Washington D.C., and in Chicago. The writing is tight, imagistic, and suggestive. The book lacks plot and linear development. The unity the book has derives from allusiveness and from related themes.

Raised by an upper-middle class Washington, D.C. African American family, Toomer was something of a wanderer and a seeker. In 1922, he received an offer to teach at a rural school in Georgia for African Americans. This experience, his first exposure to rural African American life, resulted in "Cane". The book has a strong autobiographical flavor and an intensity which results from an overwhelming experience of discovering something for the first time.

Readers may differ about the main themes of "Cane". It discusses African American life, but in a form that was changing and passing away even as Toomer wrote about it. Toomer portrays rural southern African American life while contrasting it with developing In its portrayal of women and men and the different ways they understand sexuality, the book has a strong erotic component. The book also describes lonely, isolated people of both genders and different races who show an inability to make connections with others. While there are many realistic descriptive passages in "Cane", the predominant tone is one of mysticism. (In later life, Toomer became a student of Eastern religion, a follower of the Russian spiritual teacher Gurdjieff, and a Quaker.)

The first section of the book features six short stories set in Georgia interspersed with poems which illuminate them. Each of the stories focus on a different young woman and on the nature of her sexual experiences with men. Among other things, the stories show how men and women differ in their view of physical sexuality. The stories are raw, elliptical, and absorbing.

The second section of "Cane" opens with an impressionistic description of Georgia Avenue, a major African American thoroughfare in Washington, D.C. There is another combination of poetry and short stories, which tend to be slightly more elaborate than the stories in the first part. The stories suggest that African American migration to cities came at the cost of a loss of spontaneity and zest for life. Several of the stories have themes about sexual relationships between men and women that expand upon the earlier part.

The third and most difficult part of "Cane" is a short story in the form of a closet-drama, called "Kabinis". The primary character, Ralph Kabnis, shares traits with Toomer in that he is a northern African American who takes a job teaching in an African American rural Georgia school. Kabnis has difficulty understanding his new surroundings. As the story develops, he meets local African American men, an outsider who shares some of his own traits, and a series of young women, ranging from the innocent to prostitutes. There is also a mysterious, elderly, prophetic figure. The story is highly atmospheric and descriptive as Kabnis at the end comes to a degree of understanding of himself and of the southern African American experience.

In later autobiographical writings, Toomer offered the following observations about "Cane" and about why he never wrote a successor work that I find insightful. After describing the tension even in rural Georgia between traditional life and the pull towards urbanization, Toomer wrote:

"The folk spirit was walking in to die on the modern desert. That spirit was so beautiful. Its death was so tragic. Just this seemed to sum life for me. And this was the feeling I put into Cane. Cane was a swan-song. It was a song of an end. And why no one has seen that or felt that, why people have expected me to write a second and a third and a fourth book like Cane, is one of the queer misunderstandings of my life."

"Cane" brings an immediate emotional impact to the reader, while still demanding to be read slowly and carefully and pondered. I have used a Norton Critical Edition of "Cane" which includes valuable commentaries and critical articles, including Toomer's autobiographical writing quoted above. Cane (Norton Critical Editions) The book is also available in a Library of America volume devoted to African American novels of the Harlem Renaissance.) Lovers of American literature will want to get to know Toomer's seminal work.

I am in the processing of reading this book and I must tell you, it is quite beautiful, but redundant. Cane is a master at figurative language, except he keeps mentionging lines like pine needles". The women in his stories do not seem to have a dark skin tone, most of them are fair, which leads me to believe that the women are a portrayal of Toomer himself, who was light enough to pass for white. His stories are so predictable and I found myself depressed by the time I reached the story "Avey". Why must each story have a negative or bad ending? It is as if he is following the clicheish them of "the tragic mullatto" which was popular in his time. You would think such a brilliant man wouldn't lower himself to those standards. So, Cane is a book that you COULD read, but there are much better options to choose from.