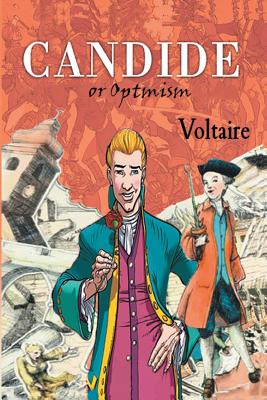 One of the world's great satires since its first publication in 1759. Witty, caustic skewering of romance, science, philosophy, religion, government -- nearly all human ideals and institutions. A selection of the Common Core State Standards Initiative. Read More

One of the world's great satires since its first publication in 1759. Witty, caustic skewering of romance, science, philosophy, religion, government -- nearly all human ideals and institutions. A selection of the Common Core State Standards Initiative. Read Less

All Editions of Candide

It came fast! I needed it for Christmas and ordered it in advance and lo and behold it came.

Candide is a modern classic written in the 18th century by one of the greatest intellectuals that the world has known namely Voltaire. It is a magnum opus in the field of modern literature. It portays the society, economy, culture and polity of Europe, Africa and the New World in the terrible, strife-ridden age of imperialism. It presents a pessimistic, cynical and blunt picture of the chaos, agonizing misery, crippling destitution, unbearable frustration and excruciating torture, suffering and relentless humiliation that poor, weak and ordinary men and women of Europe, Africa and the New World were subjected to when the wantonness, lechery, avarice, hubris and worship of Mammon had deluged the minds of hard-headed individuals of power and wealth. It also gives us an insight into the bitter, conflictual and suspicious relations that existed between whites and blacks, masters and slaves, Christians and Muslims, Catholics and Protestants, Jews and non-Jews, men and women, Europe and Africa, Europe and the New World, and warfare amongst European neighbors. It reflects the ruthlessness, depravity, maliciousness and wickedness of human nature. It is a satire that vehemently ridicules and attacks the philosophy of optimism, which dogmatically preaches that everything that takes place in this world is ultimately for the good of humanity and the whole world and a person should always have a positive outlook, hope for the best, cultivate conviction in oneself, have faith in the benevolence of the Creator and believe in the intrinsic goodness and compassion of fellow human beings. The satire is exercised through the indefatigable narration of the malevolence and viciousness of human nature. The story revolves around the character and adventures of a quixotic gentleman called Candide, who is the protagonist in the story, and people who come in contact with him.

Candide is the nephew of a German baron who is driven out of the royal castle when he is caught red-handed smooching with his cousin, who is of a higher royal descent than him. This begins the saga of misfortunes and dreadful ordeals that Candide suffers in the course of the story. He is incessantly plagued with misery throughout the story but doggedly sticks to the philosophy of his tutor and mentor, Dr. Pangloss, namely optimism. Candide?s character and that of most others in the story typify the virtues of optimism, hope, tenacity, perseverance, determination, courage, confidence and strength which enable them to endure the indignity, shame, ignominy, torture, pain, deceit and disappointment that falls upon them and ultimately overcome them. The story captures the age of European imperialism when the New World and Africa were being colonized with brutal and ghastly rapacity. It personifies the rampaging plunder and loot that the maritime European merchants, kings and soldiers were inflicting upon each other and the militarily impotent nations of Africa and the New World. It also gives us a peek at the spiteful relations that existed between whites and blacks. This is exemplified by the derogatory names by which blacks are addressed by whites and attribution of inhuman cruelty and rage only to Africans. It also depicts the lamentable and gruesome treatment meted out to slaves by their masters. It accounts for the prejudice that existed between Christians and Muslims. This is borne out by the cannibalistic traits associated with Muslims in the story. It hints at the mistrust of Jews by the non-Jews. It gives instances of the rift that existed between Catholics and Protestants at that time. It chronicles the innumerable suffering that women bear at the hands of soldiers. The story tirelessly highlights the fact that vice, evil, corruption, greed, lechery and warfare are entrenched in human nature and the world is a nasty place.

Notwithstanding the belligerence, carnage and destructiveness epitomized in the story, it portrays the fabled land of riches, joy and happiness in El Dorado. The story paints El Dorado as a mythical place of immense peace and prosperity, something Greek to the real world. This emphasizes the idea that only in one?s imagination and dreams places like El Dorado exist. The story ends with a morsel of optimism conveyed through the message of persistent work. It underscores the point that work is the primary objective of human beings in life. The story signifies that despite all the trials and tribulations that humans undergo, work cannot be neglected in any circumstance. The story tells that wealth, happiness, peace and prosperity are extremely volatile in this world. It shows that being optimistic about securing peace, happiness and prosperity yields no dividend until a person works. The story brings to light that optimism is rare and product of a long, arduous process of work. The story symbolizes a vitriolic onslaught on the philosophy of optimism but does not deny its scanty presence. It underlines the point that hard work is the only path to attain a fragment of optimism on the fronts of happiness, peace and prosperity. The story is well written but is not devoid of weaknesses. It gives no history of Europe, Africa and the New World during the 18th century or prior to that. It assumes the reader to know world history. Only a reader with some knowledge of world history can figure out the context. Despite these minor shortcomings the story presents a brutally honest picture of the world. Voltaire?s classic is a landmark in the history of philosophy and world history stands as a testament to his philosophy.

So initially, I was really uneasy about reading this book once I finished about 20 pages of it. Voltaire's writing style is book (I have not read any others by him to know if this style is carried throughout his works) is so fast and immediate that you hardly have enough time to comprehend what has happened to the main characters before something new happens. Candide, the epitome of innocence, is thrust into a very cruel reality with the notion that "all things are for the best," as taught by his master Pangloss. The book serves to comment on peoples never ending optimism for the future and that no matter what has happened, most people still look onto the future with great hope. Candide is certainly this type of person, who's beliefs are shaken and torn by what he experiences and who he meets along his journey back to his one true love, Cunégonde. In the end, Candide learns the true secret to happiness and fulfillment in one simple phrase, "Cultivate Your Garden." The ending of this book is not what makes the novel, rather, it is the ending realization that ties together the novel's string of events. After the end of the book, one can put it down and reflect on the message within it. Always going to be a favorite of mine. Read it!!!