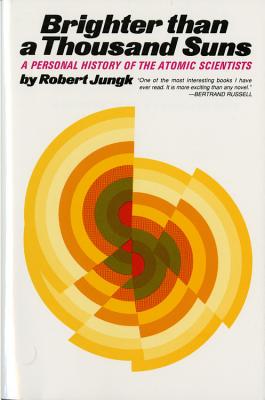 Brighter than a thousand suns : a personal history of the atomic scientists

An account of the remarkable scientists who discovered that nuclear fission was possible and then became concerned about its implications. Index. Translated by James Cleugh. Read More

An account of the remarkable scientists who discovered that nuclear fission was possible and then became concerned about its implications. Index. Translated by James Cleugh. Read Less

All Editions of Brighter than a thousand suns : a personal history of the atomic scientists

Dead Tech: A Guide to the Archaeology of Tomorrow

The New Tyranny: How Nuclear Power Enslaves Us

Heisenberg's War: The Secret History of the German Bomb

Dark Sun: The Making of the Hydrogen Bomb

Manhattan Project: The Untold Story of the Making of the Atomic Bomb

Brotherhood of the Bomb: The Tangled Lives and Loyalties of Robert Oppenheimer, Ernest Lawrence, and Edward Teller

I highly recommend this book to everyone. It was an amazing account, written in a style that made me want to keep on reading right to the very end. The best chapter was an early one detailing the conditions that existed in pre-war Germany where the scientists were able to work and collaborate and had to to JUST THINK. The whole town was used to them and they had the freedom to walk and talk and read and talk without restrictions. They were young and idealistic but they had great minds and great spirits. It was an idyllic life that was specific to that time and place and gave rise to so many great scientists.
This book helped me to understand the great range of knowlege required to investigate atomic science, the difficulties and the rewards, the interpersonal relationships and the rise of government control over atomic science. But most of all it's the story of men and women (going way back into the past) whose intellect and hard work led to one of the greatest scientific breakthroughs in history. I had to buy this book so that I could go back and reread it with time to stop and reflect. It is so well written (in German originally) and the translation into English leaves nothing to be desired. What a great find.