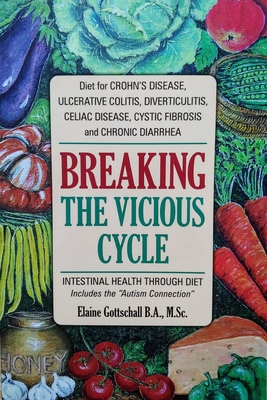 The Specific Carbohydrate Diet (SCD) has helped thousands of people worldwide who suffer from the debilitating effects of intestinal disease such as Crohn's disease, ulcerative colitis, diverticulitis, celiac disease, cystic fibrosis of the pancreas, and other forms of chronic diarrhea. The book explains the science behind the disease process and how the SCD offers a healthy, balanced, and safe approach to stop disease progression and help the body to heal. Referred to in the book as the "Autism Connection," the author ... Read More

The Specific Carbohydrate Diet (SCD) has helped thousands of people worldwide who suffer from the debilitating effects of intestinal disease such as Crohn's disease, ulcerative colitis, diverticulitis, celiac disease, cystic fibrosis of the pancreas, and other forms of chronic diarrhea. The book explains the science behind the disease process and how the SCD offers a healthy, balanced, and safe approach to stop disease progression and help the body to heal. Referred to in the book as the "Autism Connection," the author explains how the same bacterial overgrowth present in those suffering from intestinal disease occurs in the gut of many autistic children. Through evidence and testimonials, the book outlines the ability of the SCD to treat many of the behavioral symptoms experienced by those with autism. The book includes tools, resources, and gourmet recipes to support individuals in starting the SCD and their journey to health. Read Less

Food and the Gut Reaction: Intestinal Health Through Diet

Cooking for the Specific Carbohydrate Diet: Over 100 Easy, Healthy, and Delicious Recipes That Are Sugar-Free, Gluten-Free, and Grain-Free

Sticking to this diet has made a huge difference to me as someone with Crohn's disease and I would recommend it to anyone with this condition. (It's also got a very interesting chapter on celiac disease which would explain why so many people who are not diagnosed as celiacs feel they're intolerant to wheat, and is also recommended for people with ulcerative colitis, diverticulitis, etc and even autism in a chapter called "the brain connection"). The first part gives all the explanations about the science and research behind it, going back many years, and the second half gives recipes. Warning: it takes willpower! However if like me you know how very seriously Crohn's disease can affect you there's a serious incentive. The author Elaine Gottschall was a Canadian nutritional scientist who had a daughter who suffered as an infant with ulcerative colitis. This is what prompted her to formulate the diet based on her own knowledge and on previous research which she expands on in the book.
The diet itself involves eliminating not only wheat from your diet, but every other cereal too including oats: you'll also need to say goodbye to potatoes and rice as all these starch-based foods promote the bacterial imbalance in the gut which produces damage to the intestine as in Crohn's disease, which typically features inflammation, ulceration and bleeding in the gut. Also excluded are liquid milk (you can have yogurt although you're meant to make your own to get every trace of lactose out! and most cheeses although not all are allowed) and, very importantly, sugar, which adds significantly to fermentation in the gut. You replace sugar with honey in your diet, which is much easier to digest. Basically you have to cut out the complex carbohydrates in your diet, and not just for a day, but for a long period. So much for what you can't eat: what can you eat? Well, meat, fish, eggs, butter, fruits and vegetables are all fine, and nuts are used instead of flour to make cakes, biscuits etc using egg and baking soda as raising agents instead of flour and yeast. Other recipe books have since been written using principles from this book (eg "Grain-Free Gourmet" by Jodi Bager and Jenny Lass, and "Eat Well Feel Well" by Kendall Conrad): but my advice would be to start by reading the science: it will make it a lot easier to remember why you're doing it.) Sounds quirky? Yes, you might say it is: it's certainly radical. But it certainly works for me.

thei nternal battle in your gut

Good resource book!!!! A good read for those wishing to understand what happens at the cellular level in the gut.

This Book Saved My Life

I don't know what to say. This book literally saved my life. I was given a dose of antibiotic for a vaginal infection and it nearly destroyed my ability to digest grains. This book tells the story of a woman who became a research scientist in order to help her young child who was dying of an inflammatory bowel disease. Many people have this but have no idea that this diet or this book exist. I bought a copy for everyone in my family. I am especially hopeful for my brother's daughter who is autistic. Apparently, when a family would go on this diet to make it easier for their sick child to stay on it, those with autistic children found that it returned the autistic child to normal or near-normal behavior and emotional patterns! Astounding!

The recipes are simple and taste very good (I'm VERY picky, so that means they really are quite good). And for those who need to understand why this diet works, the author gives a clear explanation of the science involved, down to the molecular level, discussing the construction of complex carbohydrates and why they can't be broken down in the small intestine, which is where that normally takes place. I come from a family of medical doctors and I'm studying medicine myself at the moment (but Oriental medicine, not Western for me!), and the scientific discussion is easy enough for anyone to understand, yet accurate and detailed enough to be intereting and meaningful to those in the field of science.

A great achievement. A must read for anyone who has intestinal disorders in their family.

After having this book for about a year, I finally was sick and tired of feeling lousy. Having no energy, and being in my mid 50's, I finally started reading through all my "Healthy" books and this won the prize. Being able to eat real food, mostly readily available in my stock, I adventured on yet another trial of try to feel better way of eating. I just loved it!!!! One of my major concerns was something to snack on, especially for my husband (who does not like to eat health foods). Well, the nut bread recipes , peanut butter brownies, carrot cake and banana pancakes were very well accepted, as well as other recipes I tried.
This is not so much a cookbook but a book more focused on the" Relationship between food and disorders such as Crohn's disease, ulcerative colitis, autism, diverticulitis, celiac disease, irritable bowel syndrome, etc." Explanations of our digestion process and how different foods are absorbed and why we feel the way we do, makes alot of sense. There are approximately 75 pages of recipes and links to other 'same type of eating'
In my opinion, what it all breaks down to is this: Cut out all the junk food and processed foods and you can REALLY feel great by eating right. Yes you can have your cake and eat it too! You will not make it with white or wheat flour, but with nut flour instead!!
I thought it was different at first but once I made it, EXCELLENT! I ground the nuts myself.
I highly recommend this as a must have book. Try it, you'll like it ! You will feel alot better.