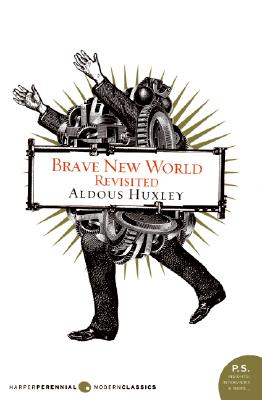 Written 30 years after his dystopian masterpiece of 1932, Huxley's critically acclaimed follow-up offers a chilling reminder of Europe's slide into totalitarianism. His warnings against propaganda, overpopulation, and other social vices are still relevant. Read More

Written 30 years after his dystopian masterpiece of 1932, Huxley's critically acclaimed follow-up offers a chilling reminder of Europe's slide into totalitarianism. His warnings against propaganda, overpopulation, and other social vices are still relevant. Read Less

A foreboding resemblance to our present days...

We are the future he dreamt before many of us were even born. The ideas presented in this verbose book heavily coat our current society with his sardonic and dark views of the future that have inevitably become factual. His language is distinctly intellectual and high-brow, showing a type of indignation for the populous that refuses to read books and become people of letters, yet, as it has become apparent, we are simply peoples of bright colours and pretty sounds. His view stretched far into the future, much beyond his own grasp.

His untimely death on the 22nd of November, 1963 (the same day C.S. Lewis passed as well as John F. Kennedy?s murder) led to his legacy falling into obscurity.

His tone, as in many of his books, remains esoteric due to the sheer magnitude that his view encompasses. Only those keenly aware of the world and what that fully means for the ordinary peoples, much like myself and, not to be too presumptuous, many of you seeking out this book.

It opens with a preface (Note: This preface writ by Huxley himself is not included with the 2004 individual book, only within the combination publications of Brave New World and BNW Revisited) that explains how he realizes that such a book cannot, alone, alter the entire world?s culture nor truly have enough detail to fully paint words that reflect how dire his predictions, if entirely realised, shall have horrid repercussions across the globe.
He begins with why he sees a totalitarian state (most likely a world government) would feel the need to create such a grid locked reality. The answer is over-population. This is undoubtedly a fiercely increasing problem, and as he says, unlike any other humanity has ever encountered. If there are not too many children being brought into the world, and not only that, too many people living to be outrageous ages like 95 or 100, there are too many people to live in proper harmony. In the year 1850, there were approximately 800 million people living on this planet. There are now nearly 7 billion people living on the Earth. That means that within 150 years, we have increased population 8.75 percent and continue to increase it. With governments that are used to keeping people in control and happy, this amount of new citizens of Earth is astounding.

With new people in mass numbers comes mass hysteria, so with over population comes over organization. This newly instituted ideology brings about problems faced by leaders so that most people of the world can live comfortably, let alone happily. This organization of people has been going on for centuries, and now since so much progress has been created in such little time, Huxley speaks of how this is a tactic to create totalitarian laws and revoke liberties so that people do not realise that they?re democracy they have fought for has been altered. An illusion of freedom covers the true reality. With much controversy over war time, 9/11, 7/7/2005 and the past 60 years shows itself frightening resemblances to his dystopia.

His next few sections focus primarily upon how with entertainment from all sides, regardless of their media from being visual, auditory, chemical or any other variety of distraction, they all serve to create an artificial contentment. These chapters made me feel lucky that I do not indulge into television, cinema or video games nearly as much as many of my peers and elders have and continue to do. It becomes apparent why people in this era are unhappy and have a strange new problem: depression. This is a small psychological side effect of negative media proliferation into our minds from the rubbish box that makes you smile. With a detachment from nature and our innate abilities to create art and beauty, we become much more mundane.

He makes reference to the novel Nineteen-Eighty Four by George Orwell in this novella, sharing how he feels that neither book of the two (Brave New World & 1984) clearly depicts a harsh reality that will likely, in his and this writer?s opinion, be a combination of both. Since his novel and teachings heavily influenced 1984, he takes personal credit for being the prescient author more so than his student.

Huxley later chronicles his research into hypnopaedia, which is the influence of one?s mind in his or her sleep. He speaks of how it was researched in the 1950?s to see if such a technique could contribute to overall knowledge and insight, like taking wisdom lessons whilst you slumber; to never feel that sleep takes away from your productivity or abilities to better yourself. It seems to be a comforting idea until he explains how the results are just that of specific phrases being repeated, for it is only conditioning you to believe certain aspects of what is heard. He goes on to explain how it is partially successful at inducing IQ points, yet not to all peoples. The recognition of this tool for conditioning is much more plausible and capable than increasing intellect, so of course, he describes how this is utilised to disallow interventions of logic or instinct.

He speaks of subliminal messaging (strobonic injecting) as a fairly new technique to the 1950?s, and with perfection, could lead to such sly interjections into our subconscious that we feel something without any realisation whatsoever. It would explain why we are so innately branded, especially when such actions are performed to an audience of children, tomorrow?s big spenders.

Chemical persuasion is simply alcohol, tobacco, and others narcotics that induce pleasure and temporary escape from the harsh colds of reality. He helps to show how eventually, presuming that the juggernaut corporations that own all other types of pleasure allow such a competitor to emerge, shall create a drug that gives euphoria without any after effects, no anger, fear, sadness or unpleasant emotions at all. This proposed idea would give pure happiness with no cost for easy, simple consumption that does not inhibit one from being capable of any action, complex or simple.

This book, with all its rather shattering realities of our own societal and cultural failures ends on a slightly optimistic note. He describes how only through a type of reversal conditioning via education can possibly combat this horrid mindless brainwashing. He encourages education to let intuitive ideas and non-verbal cues to help develop logic and common sense. People can teach words and letters, yet can they teach judgement?

His final chapter discusses the idea that we must work together to find a resolution to this era. If we do not decimate ourselves with our own weapons due to petty disagreements regarding religion, race, etcetera, we must use the power we hold to benefit each other rather than allow ourselves to divulge into frivolous notions of selfish and unintelligent actions. We all have fantastic power and abilities, yet we only indulge into the simple parts of our minds. Humans are capable of greatness throughout all the horrid misdemeanours that have occurred.

?We are on the horns of an ethical dilemma, and to find the middle way will require all our intelligence and all our good will.?

?Meanwhile there is still some freedom left in the world. Many young people, it is true, do not seem to value freedom. But some of us still believe that, with¬out freedom, human beings cannot become fully human and that freedom is therefore supremely valuable. Perhaps the forces that now menace freedom are too strong to be resisted for very long. It is still our duty to do whatever we can to resist them.?