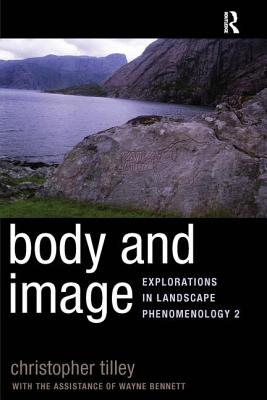 Chris Tilley offers a kinaesthetic approach to understanding ancient landscapes, one that uses the full body and all the senses, through examples of rock art and megalithic architecture in Norway, Ireland, and Sweden. Read More

Chris Tilley offers a kinaesthetic approach to understanding ancient landscapes, one that uses the full body and all the senses, through examples of rock art and megalithic architecture in Norway, Ireland, and Sweden. Read Less

All Editions of Body and Image: Explorations in Landscape Phenomenology 2

The author has taken an unusual approach to confronting prehistoric petroglyphs. He does not try to present an existing or a novel interpretation of their 'meaning' such as their connection to locations of water, hunting, shaminism, mapping the terrain, recording of battles, marking territory, astronomical, or the other interpretations that have been offered in the last two centuries. Rather, the writer concentrates on the orientation and sequential aspects of rock art, especially in reference to how one must move through them in order to view them. This is very interesting and refreshing.

This presentation is a Eurocentric one, reviewing three sites in depth, in Norway, Ireland and Sweden. One could even say that it is limited to North Western Europe which is after all a limited geographic and cultural area. I notice that the actual petroglyphs are very limited in their form in the first two sites. Of course the spirals of Ireland are not to be ignored in any review of prehistoric art. The Swedish examples are more developed or complex. Perhaps conclusions can be reached about NW European rock art that does not relate to say Southern Europe, Eastern Europe, Africa, Asia, Australia, America and the other larger areas of the world. It is not clear if the author projects his approach to the larger world or not.

Although I really appreciated this new spatial and kinesthetic approach to rock art I kept having the nagging feeling that it is specifically because we have not 'cracked the code' on the symbolization that we might veer off into a different approach. I personally don't care much about the meaning of rock art, but appreciate the graphic and sometimes glyphic forms that rock art displays. But this book took me off into another realm and I doubt that I will look at the next site visitation the same again. I may need a camcorder as well as a still camera.

This is the second volume in a series and I have not read the first volume, but feel I now must do so.