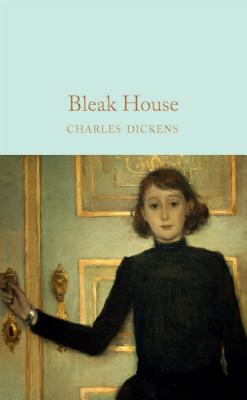 A beautifully crafted tale of crime, mystery and suspense. The grimy fog rolls over London as three young adults step into their new lives. They encounter a gamut of remarkable characters, from the irritating leech Mr Skimpole to the gallant soldier Mr George, whilst at the heart of the tale lies a lengthy labyrinthine court case which embroils many in its bitter grasp. Meanwhile the insidious lawyer Mr Tulkinghorn is prying into the mysterious letters of a man who styled himself 'Nemo'and his connection to the imperious ... Read More

A beautifully crafted tale of crime, mystery and suspense. The grimy fog rolls over London as three young adults step into their new lives. They encounter a gamut of remarkable characters, from the irritating leech Mr Skimpole to the gallant soldier Mr George, whilst at the heart of the tale lies a lengthy labyrinthine court case which embroils many in its bitter grasp. Meanwhile the insidious lawyer Mr Tulkinghorn is prying into the mysterious letters of a man who styled himself 'Nemo'and his connection to the imperious Lady Dedlock. And what part does the ward Esther have to play in all this? When Tulkinghorn turns up murdered, and Lady Dedlock disappears, Inspector Bucket realises he'll have to unearth a few dreaded secrets if he wants to solve the case. FLAME TREE 451: From mystery to crime, supernatural to horror and fantasy to science fiction, Flame Tree 451 offers a healthy diet of werewolves and mechanical men, blood-lusty vampires, dastardly villains, mad scientists, secret worlds, lost civilizations and escapist fantasies. Discover a storehouse of tales gathered specifically for the reader of the fantastic. Each book features a brand new biography and glossary of Literary, Gothic and Victorian terms. Read Less

All Editions of Bleak House

It is not Dickens' most sunny and easy read, perhaps. But it is one of his most excellent, which is saying a lot. Here, he exposes the legal system and all the leeches who suck its blood, while sarcasm drips from the pages. The "Jarndyce and Jarndyce" case is droning on, year after year, people are born into it, and they die out of it, while nothing much happens other than the lawyers getting their fees. And you will meet a host of the most sad, hilarious and horrible characters, from the meek little clerk who walks with his head on the side so as not to offend anyone, the pathetic street sweeper Jo, and the ice cold Lady Dedlock, to the evil old rag-and-bone man in a wheelchair with his outrageous family. All of them have one thing in common: the "Jarndyce and Jarndyce" case.

Wonderful piece of lit from Dickens

Bleak House is a novel of immense drama and, yes, heart-rending bleakness. Too many innocent people are ruined by the desolate pains surrounding the inhabitants of Bleak House, from a list of unavoidable circumstances.

Young Esther Summerson, our heroine, looks upon Mr. Jarndyce as her guardian and protector. As the Jarndyce and Jarndyce lawsuit continues on in Lincoln's Inn Hall year after year, it wrecks many a man involved in British law. Although it is Mr. Jarndyce and his family's business that tangles the infamous lawsuit, his interests do not lie with it. Instead, one of Esther's dearest friends, Richard, takes on the role of lawyer upon his shoulders; although his eager and young mind hopes to settle matters that have remained snarled for decades, he pays a terrible price.

Lady Dedlock is a haunted woman, with her secret always lurking around the corner, ready to be exposed. What she didn't even know was that her child did not die at birth, but has actually been kept alive for all these years since, unbeknownst to her. As her story plays out, the reader finds the moral in not keeping secrets.

Jo, a boy destined merely for the streets, fulfilling the only predetermined path his existence could lead to. Mr. Bucket, the detective who happens to be in just the right place to put the pieces together of a very large event on the whole; a man of whom Sherlock Holmes could approve of. Ada, a blessed girl who finds herself directly in the center of Bleak House's most terrible moments, but provides the friendship that Esther Summerson so needs.

Esther Summerson, who simply aims to do the best she can in her situation, just like us all. Through all the emotion, surprises, and heartbreaking news, she's a trooper, that Dame Durden.

As these lives and more twist together in connective plots that are so intricate, you see what the real of existence of humanity is degraded to, and yet, what we could be.

Personally, Bleak House didn't become my favorite Dickens novel, but it certainly is a well-written piece of Victorian literature.

Mr. Jarndyce called me into a small room next his bed-chamber, which I found to be in part a little library of books and papers and in part quite a little museum of his boots and shoes and hat-boxes.

"Sit down, my dear," said Mr. Jarndyce. "This, you must know, is the growlery. When I am out of humour, I come and growl here."

"You must be here very seldom, sir," said I.

"Oh, you don't know me!" he returned. "When I am deceived or disappointed in?the wind, and it's easterly, I take refuge here. The growlery is the best-used room in the house. You are not aware of half my humours yet...."

Tell us what you really think, Charles...

I am stunned that a novel with such a labyrinthine plot can be so engaging. A deeply satirical, jaundiced view of the British legal and social system of Dickens' era, "Bleak House" tells the story of an orphan, Esther Summerson, as well as those others entangled with her life in various, sometimes mysterious ways. For roughly half of the book, she serves as our narrator from her perspective as a good-hearted, intelligent girl who has had the good fortune to be taken in as a companion and housekeeper for interested parties in the interminable case of Jarndyce & Jarndyce. This case, over disputed Wills, has sucked in far too many people's lives as it stretches on and on with no end in sight.
Our other, more mysterious narrator, is more omniscient, and it is here that we are lead detective-like through the underbelly of the city, tracing mysterious connections and witnessing legal blackmail and the desperation it engenders.
Dickens here is at his height of linguistic prowess, where the way he utilizes language says more about the characters on the page than his actual sentences do. This is definitely a classic to search out, for its linguistic feats and for the strong social commentary it unflinchingly serves.