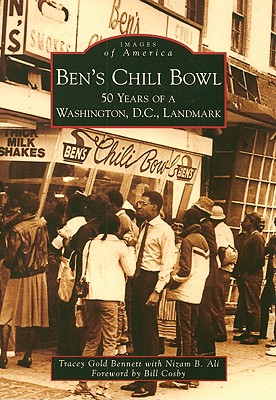 From the days when U Street was hailed as "Black Broadway" to the current revitalization and gentrification of the new millennium, Ben's Chili Bowl survived it all. On August 22, 1958, West Indian immigrant Mahaboob Ben Ali and his fiancee, Virginia Rollins, saw their dream realized as they opened a hot dog and chili shop on U Street. They never imagined that Ben's would become world renowned or such a beloved restaurant in the nation's capital. Today visitors to U Street will find a diverse and eclectic mix of residents, ... Read More

From the days when U Street was hailed as "Black Broadway" to the current revitalization and gentrification of the new millennium, Ben's Chili Bowl survived it all. On August 22, 1958, West Indian immigrant Mahaboob Ben Ali and his fiancee, Virginia Rollins, saw their dream realized as they opened a hot dog and chili shop on U Street. They never imagined that Ben's would become world renowned or such a beloved restaurant in the nation's capital. Today visitors to U Street will find a diverse and eclectic mix of residents, music venues, trendy shops, and, of course, "the Bowl." The images in this book provide a look back over the 50-year history of Ben's Chili Bowl, U Street, the Ali family, and the patrons who have helped define Ben's as a vibrant cultural landmark." Read Less

All Editions of Ben's Chili Bowl: 50 Years of a Washington, D.C., Landmark

The Palisades of Washington, D.C.

On August 22, 2008, an unlikely Washington D.C. Landmark, Ben's Chili Bowl, will celebrate its fiftieth year in business at 1213 U. Street N.W. in the Shaw area of Washington, D.C. Ben's -- or the Bowl -- is famous for its chili, made to a secret formula -- which is spread liberally on its hot dogs and half smokes, and served frequently with cheese fries and shakes. Bens will celebrate its fiftieth anniversary with a concert at the Lincoln Theater on August 21 and a street festival on August 22. I had a chili dog and more cheese fries than I could eat during my most recent visit to the Bowl a couple of weeks ago.

The Bowl is located in the building which once housed the Minnehaha Theater, the first silent movie theater in Washington, D.C., and it is adjacent to the Lincoln Theater, itself a landmark of African American culture in Washington, D.C. for many years and recently restored. The interior of the Bowl -- with its stainless steel counter, its counter seats, tables, and large back room -- all of which have remained in use since the restaurant's opening -- are familiar to generations of Washingtonians. The Bowl has flourished through change and adversity. The owners recently purchased the adjacent property, which had been run-down and abandoned for many years, and will convert it into a bar with a theme similar to the restaurant. Ben's Chili Bowl also has opened two facilities at the new Washington Nationals baseball stadium.

As part of the fifty-year celebration, the Images of America Series has released this new book, "Ben's Chili Bowl: 50 Years of a Washington, D.C., Landmark," which consists of a pictorial history of the Bowl, its owners, its patrons, and its community over the past 50 years. Tracey Gould Bennett, a D.C. journalist and historian wrote the book with assistance from Nizam Ali, who now operates the Bowl with his brother, Kamal. Bill Cosby wrote the Foreward to the volume. Cosby is the Bowl's most famous patron, and, a sign inside the restaurant announces, is the only person who eats in the Bowl for free.

The book, as it must, also celebrates the past 50 year history of the U Street community of which Ben's Chili Bowl is a part. When the Bowl opened in 1958, the U Street corridor was the home of a thriving African American music and entertainment district in a still segregated Washington, D.C. In 1968, with the riots following the assassination of Dr. Martin Luther King, Jr the U Street corridor was decimated. Ben's Chili Bowl remained open. It was allowed to stay open after the curfew and served both the police and firemen sent to control the riots and the members of the Stokley Carmichael's Student Non-Violent Coordinating Committee which was headquartered across the street. In 1987, with the advent of construction for the Shaw Metro stop, business was reduced to a trickle as there was limited access to U Street. Ben's Chili Bowl remained open through a lean five years, usually with a staff of two. With the revitalization of U Street following the opening of the Metro and the recognition the Bowl has received, Ben's Chili Bowl is thriving as never before.

The opening chapter of Bennett's book shows photographs of U Street and the Bowl during the days of the late 1950s. Much of the book focuses on the Ali family which has operated the Bowl since its inception. Ben Ali, a West Indian immigrant from Trinidad, and his fiance Virginia Rollins, an African American from Chance, Virginia (100 miles south of Washington,D.C.) opened the Bowl with a $5,000 bank loan in 1958 and married in the face of laws then on the books prohibiting interracial marriages. They operated the Bowl until 2007 and then turned management of the business over to two of their sons, Nizam and Kamal who operate it today. The Ali family and its story figures prominently in this book.

Subsequent chapters of the book describe the famous patrons of the Bowl, from D.C. go-go singer Chuck Brown, to tennis star Serena Williams, to academic Cornel West, to Senator and presidential candidate Hilary Clinton, with innumerable celebrities in between. The Bowl's back room also has hosted political meetings of every stripe, from Congressional Republicans, who meet at the Bowl monthly, to the local D.C. Government, to many community activist groups. These meetings are documented in Bennett's book. But the most moving sections of the book are those which show the many everyday people of all races and walks of life who have patronized the Bowl regularly over the years. There is also an excellent gallery of photographs of employees of Ben's Chili Bowl -- some of whom have been with the Ali's for 30 years -- past and present.

From its simple origins, Ben's Chili Bowl has become a beloved and familiar part of Washington D.C. life with its chili-laced dogs, down-home atmosphere, African American heritage, and openness to pluralism. Ben's deserves to be celebrated on its 50th anniversary. I enjoyed recollecting the times I have had at the Bowl in reading this book.