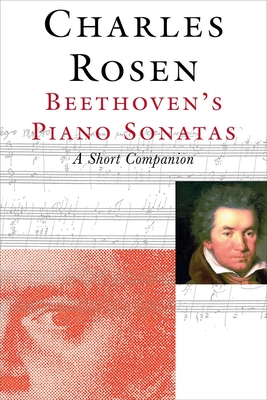 Beethoven's piano sonatas form one of the most important collections of works in the whole history of music. Spanning several decades of his life as a composer, the sonatas soon came to be seen as the first body of substantial serious works for piano suited to performance in large concert halls seating hundreds of people. In this comprehensive and authoritative guide, Charles Rosen places the works in context and provides an understanding of the formal principles involved in interpreting and performing this unique ... Read More

Beethoven's piano sonatas form one of the most important collections of works in the whole history of music. Spanning several decades of his life as a composer, the sonatas soon came to be seen as the first body of substantial serious works for piano suited to performance in large concert halls seating hundreds of people. In this comprehensive and authoritative guide, Charles Rosen places the works in context and provides an understanding of the formal principles involved in interpreting and performing this unique repertoire, covering such aspects as sonata form, phrasing, and tempo, as well as the use of pedal and trills. In the second part of his book, he looks at the sonatas individually, from the earliest works of the 1790s through the sonatas of Beethoven's youthful popularity of the early 1800s, the subsequent years of mastery, the years of stress (1812-1817), and the last three sonatas of the 1820s. Composed as much for private music-making as public recital, Beethoven's sonatas have long formed a bridge between the worlds of the salon and the concert hall. For today's audience, Rosen has written a guide that brings out the gravity, passion, and humor of these works and will enrich the appreciation of a wide range of readers, whether listeners, amateur musicians, or professional pianists. The book includes a link to recordings of Rosen performing extracts from several of the sonatas, illustrating points made in the text. Read Less

All Editions of Beethoven's Piano Sonatas: A Short Companion

Piano Notes: The Hidden World of the Pianist

Music Of A Lifetime

Beethoven's 32 sonatas are the glory of music written for the piano. They are music of Beethoven's lifetime in that their composition spans the period from his early days in Vienna to near the end of his life. In another sense, Beethoven's piano sonatas are the music of my lifetime. I first was exposed to them as an early adolescent through concerts, records, and my own early attempts at playing the easier of them. Today, all too many years later , I still try to play the sonatas and I go to recitals. I listen to them on CDs now instead of records. And I read about them, particularly Charles' Rosen's erudite and eloquent study. With short periods away, Beethoven's piano sonatas are probably the most lasting interest I have had in my life.

Rosen was inspired to write this book by giving a performance of the sonata cycle and to lecture on Beethoven at a summer music festival and school. The book is, on one level, a continuation of Rosen's study, "The Classical Style" with application to the Beethoven sonatas. The book is marked by its wide-ranging references. There is a great deal of specific discussion of Beethoven's piano sonatas, of course, but the book is enriched immeasurably by examples from and discussions Mozart, Haydn, and Schubert, as their works are compared and contrasted with Beethoven's.

The book is divided into two Parts. Part I, "The Tradition" begins with a discussion of the nature and development of the sonata form. Rosen describes well how Beethoven's sonatas have, until very recent years, been a bridge from the world of performance of classical music in the home to its appreciation in the concert hall. This was certainly the case with me.

The book discusses various ways in which the sonatas have been interpreted over the years and attempts to find that elusive quarry -- the manner in which the composer would have interpreted the sonatas. Rosen devotes a great deal of attention to questions of tempo and questions of phrasing, with examples from Beethoven's predecessors. He concludes that modern performers place more emphasis on a smooth legato style than would have been the case in Beethoven's day and that Beethoven's tempos would be somewhat different from those at which we now hear the music. In some cases, tempos would have been faster, but I get the impression that in the main tempos were taken at a slower pace. The book comes with a CD recorded by Guiilio Caesare Ricci which illustrates helpfully many of Rosen's musical examples. Rosen stresses that there is no single way of performing these complex, wonderful pieces of music. His discussion of performance practices still is highly useful in understanding the sonatas and in listening to them.

It is worth noting that Rosen spends a great deal of time on sonatas which are relatively little performed, particularly the opus 54 (which is given in full on the CD that comes with the book) and with the opus 31 no. 1 sonata. His discussion of these work illuminates them and illuminates Beethoven's output. He also gives thorough discussions of more familiar works particularly the "Moonlight" sonata and the Hammerklavier -- with respect to the latter, he follows-up upon the lengthy analysis of this work in The Classical Style.

Beethoven's piano sonatas are indeed music of a lifetime. If you love them, by playing or by hearing them, you will love this book. If you want to learn about them, this book will be an outstanding guide.